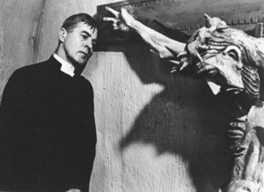 Bergman is the only practising director who can make an eloquent film from a rag, a bone and a hank of hair.

Ingmar Bergman’s most engrossing and challenging films of the 1950s and ’60s invariably explored the ultimately disappointing conflicts between men and women. And yet, the most emblematic image from his entire work is that of the medieval Knight, Blok, confronting the figure of Death on a deserted beach in The Seventh Seal (1957). The international success of that film contributed to Bergman’s substantial – and somewhat undeserved – reputation as a troubled Believer in God and as an artist searching for some meaning to life.

At a deeper level, this agitated groping after an undisclosed Truth was actually closer to a philosophical inquiry for Bergman, however clumsy, toward a compromise with the irreconcilable aspects of experience – the gratifications and frustrations of desire, happiness and despair, pleasure and pain. And if Bergman’s compromises seem more than a little bleak, it is thanks to his troubled faith that we have a few of the greatest films ever made.

In Swedish, Winter Light is known as Nattvardsgasterna (The Communicants). The reason for this is made explicit by the first 12 minutes of the film, which presents us with a Holy Communion service in its entirety (2). Bergman uses the service, which is the ritual sharing of the body and blood of Christ, to reveal subtleties of character. In an extremely plain, stark church, made even more remote in place and time by shots of the slate-grey weather outside, we are introduced to the “communicants”: an average-looking young couple (a very pregnant woman who looks straight ahead at us and a tall man beside her who stares nervously at the stones in the church floor); a hunchback who sings the hymns quietly but who follows the service word for word in his prayer book; a rather frumpish, bespectacled woman gazing distractedly at the pastor. One by one they come forward to partake of the bread and wine, stand-ins for the body and blood of Christ supposedly sacrificed for their sins – devoutly, anxiously or greedily, further elaborating Bergman’s emphasis that each of these people derives something different from the service.

As subsequent scenes reveal to us, the pastor is Tomas Ericsson, suffering from the flu and a sudden, devastating loss of faith. The young couple are fisherman Jonas Persson and his wife Karin. The hunchback is Algot Frovik, living on his disability cheques and a small stipend from the church. The frumpish woman is Marta, who has been Tomas’ mistress for two years. Each of them wants a piece of Tomas, either for solace or encouragement or love. And poor Tomas, who cannot break through “God’s silence”, has nothing left to give to any of them.

The remainder of the film represents three hours in the lives of these people, as Tomas tries to fend off their demands on his time and faith and journeys to an even smaller and more remote church for the three o’clock service. And along the course of Tomas’ passage through his dark day of the soul, he somehow finds a reason to continue, to intone the same words of his presiding ritual to a church empty but for his mistress, who is only there to worship him and not the symbols on the altar. At the last, Bergman offers no consolation for Tomas’ troubled faith, except perhaps the persistence of habit, of a ritual devoid of meaning except as a simple enunciation of pain.

Winter Light was the second part of what became known as a trilogy of “chamber films”, along with Through a Glass Darkly (1961) and The Silence (1963). Of the three, Winter Light comes closest to the description – a true chamber piece for two or three instruments, Pastor Tomas, Marta, Jonas. And though drastically drained of tangible human content, it at least puts us in the company of people instead of symbols in a dramatic exercise. Vernon Young summed up the film succinctly: “Winter Light concerns the faith problem of a visibly human and fully dimensional pastor in north Sweden involved in a despairing struggle not only with his belief but with a woman he can’t love who loves him” (3).

The exterior shots of a bitterly cold, lifeless world reinforce the sense that these people live in an uninhabitable world, not hospitable even to a bird. Sven Nykvist experimented with much low-angle direct lighting to capture the peculiarly northern look of daylight that is actually a prolonged twilight between a late dawn and an early dusk – the sun unable to reach far enough above the horizon to illuminate latitudes that have effectively “gone under” for a prolonged sleep.

Technically, the film is flawless – no single shot could be removed without damaging the overall effect. It is as if Bergman assembled the raw materials to tell his story, as raw as he could make them, then placed them in front of Sven Nykvist’s camera with as little emphasis as possible. That said, the film contains three powerful performances – Gunnar Björnstrand’s lost and frail Tomas, Ingrid Thulin’s frustratedly loving Marta and Max von Sydow’s tormented Jonas. Bergman himself admitted in an interview:

I think I have made just one picture that I really like, and that is Winter Light. That is my only picture about which I feel that I have started here and ended there and that everything along the way has obeyed me. Everything is exactly as I wanted to have it, in every second of this picture (4).