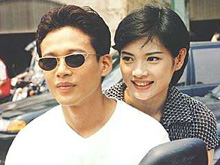 Tsai Ming-Liang’s The River (1996) is his second-last feature before The Hole (1998). It is a strange and disturbing yet fully engrossing film. Its almost every moment is filled with silence, bleakness, isolation and despair. In this fragmented universe, each character seems enveloped in their own private, eternal solitude, profoundly disconnected from those around them, most especially those they live with. The sheer silence and the very peculiar minimalism of The River – its focus on the characters’ miniature daily actions and habits – creates a brooding quality but also a riveting, finely controlled tension.

The cornerstone of Tsai’s style is minimalism and ellipsis. We observe different characters individually in their surroundings, as they go about their daily duties, and only gradually do we learn the connection between them. First a young boy, who is brought into a film shoot, and then emerges as a central character. Then a man, seen lying in a sauna, then eating, then dealing with a water leak in his room. Finally, a woman who is seen working an elevator, tasting and packaging food and accompanying a man, presumably her lover. Slowly, these three characters are revealed to be a family, living in the same house. As Jonathan Rosenbaum says “The urban alienation that seeps into virtually every shot also affects the film’s narrative structure, so that at least half an hour passes before it’s clear that the son and the parents are even related.”

What is remarkable about Tsai’s aesthetic is his uncluttered, finely honed emphasis on the characters themselves, and the way that almost every frame is dominated by their physical actions or sheer presence, usually carried out in silence. Almost never shot in close-up, Tsai observes them in mid-shot or wide-shot without cutting the scene, placing his characters at a distance and telescoping their silent, minute actions against the backdrop of a larger environment. It’s a style that exacerbates the sense of being confined and entrapped by one’s environment – a condition that Tsai suggests is specifically a result of modern city life. Although more people live in greater physical proximity to each other than ever before, their emotional and psychological separation is profound. At public escalators, one crosses paths with a long lost friend who just as quickly becomes a stranger; in a neon-lit arcade of mass consumerism, symbolised by the international presence of McDonalds, a pair of strangers silently read each others’ faces and bodies and seal a fleeting sexual exchange.

Far from a random, interrupted world, The River slowly emerges as a hermetic, careful inter-weaving of symbols, motifs and themes. The symbolic presence of water is paramount here as it is in The Hole. The River‘s second scene is of a film crew on the bank of a murky industrial river struggling to make a dummy floating in the river look real. A beautifully-filmed sequence that like the rest of the film is distant, observant and equally mysterious in its regard, it also gives rise to themes of filmmaking and realism. And in a wonderful stroke, Tsai’s story begins out of this very complex – the young boy Hsia-kang (Lee Kang-sheng), who emerges as the main character, is approached to replace the dummy in the river. From this point on, however, Hsia-kang is struck by a horrible crippling of the neck. It becomes a problem that his parents must deal with – his father (Miao Tien) takes him to various hospitals, doctors, and religious leaders while his mother (Lu Hsiao-ling) takes him to an apparently traditional folk ritual. Hsia-kang’s shocking ailment – a loss of control and balance – is in one sense a physical displacement or index of the fundamental perversity, malaise and vapidness of the world around him. At roughly the same time of Hsia-kang’s developing ailment, his father is preoccupied with an incessant water leak in his bedroom that eventually leads to a downpour, which his mother must control. However one interprets the particular symbolism of water in The River, it undoubtedly emerges as the single life force that connects these profoundly isolated characters. As Rosenbaum concludes: “Sex and plumbing, seduction and infection, a river and a spray of steam and a torrent of rain are all part of the same inexorable flow.” (1)

The power and force of The River is the way Tsai renders this contemporary urban malaise and profound isolation in a starkly materialist mode. So much concentration is placed on bodies simply performing their necessary actions, framed from a distance, that a distinct rhythm emerges. A certain ‘beat’ of the everyday, so that the same amount of effort that goes into cooking a meal and ironing a shirt goes into a shower at the sauna or an anonymous sexual exchange. Rarely a crack of emotion throughout the film, its most shocking moment occurs in the very terms of this minimalist mode. The blindness with which each character carries out their life, shunting or willingly oblivious to their kin, culminates in the father’s unknowing sexual encounter with his son at the gay sauna. At this moment, the father’s habitual actions are radically disrupted by this perverse and shocking new context. But even after it has occurred, there is no breakthrough of communication or resolve of any nature. The father slaps the son, the son hurries out and the next morning, after having shared the same bed, the father abruptly announces they’re leaving whilst the son walks out onto the sun-basked balcony. And the film ends. It’s a haunting ending that emphasises the very deep-rooted malaise and division that cuts through the heart of this world.

Has their ever been a family so profoundly divided as in The River? We never see them eat together; they barely speak to each other. In fact, the mother and father sleep in separate rooms and never converse, so that even the occasion when he directly contacts his wife at work to inform her their son has been hospitalised, she is not available and must leave a message. And any contact between family members is delivered abruptly, sometimes with resentment or hostility. At the sight of her ailing, distraught son, the mother questions him whether it is because she was a bad mother. The father’s disposition toward his son is equally disinterested and perfunctory – he takes him to various places for his neck but doesn’t think twice about slapping him when he is angry. The only moment in which his genuine concern for his son is illustrated is when he holds his head up straight whilst he is riding the motorbike.

In a way, The River‘s perfect fusion of style and content is powerfully evident – this is a cold, lonely world where bodies go through their motions mechanically, without any connection or interaction with others. One false move, though, and your family member becomes your sex partner. And any kind of physical interaction or intimacy between characters in this film takes the form of anonymous or casual sex. In fact, the sex scenes are particularly intense – they are trembling moments of physical pleasure, for the most part shrouded in darkness except for the sliver and shard of light that exposes parts of enraptured bodies. In each one there is a sense of desperation, a trembling reaching out. But ultimately, the attempts are futile; sex and physical contact only seems to further emphasise the characters’ ultimate isolation (the mother throwing herself on an indifferent lover; the son desperately trying to hear the copulating couple in the adjacent hotel room; the father’s exchange with his son).

This is a work in progress.