This year’s Brisbane International Film Festival included a retrospective tribute to the work of Hollywood director Budd Boetticher. Five films were shown: Bullfighter And The Lady (1951), Seven Men From Now (1956), The Tall T (1957), Ride Lonesome (1959) and Comanche Station (1960). I was invited to introduce this program since I was one of the first Australian critics to see merit in the work of this low profile denizen of the B-grade, whose best films had been pointedly omitted from the first edition of Leslie Halliwell’s influential Film Guide and treated condescendingly in later editions. The following is taken, with slight amendments, from notes I wrote for the Sydney University Film Group Bulletin in February 1970.

Every culture has its dreaming, its time of myths. Myths embody the conflicts and aspirations of a collective anguish – unattained desire, inexorable menace (akin to Aristotle’s “pity” and “fear”). They compress, transfigure and objectify areas of yearning and distress which society cannot bring itself to confront directly; and they manifest only as much reality as a common level of consciousness can bear.

In the age of Admass and the automobile, the children of Metropolis have had their dreaming. Their anguish is that of Alienated Man, of Self confused with Role, without assurance, without trust, without fulfilment. Their myth is the way of the self-reliant hero, the figure of lonely strength who beholds the world with steady gaze. They have turned to the Underworld and the Frontier for their dreamtime; one transforms the present, the other idealises the past.

The Western film looks back to the last time in national history when the sense of secular community was nascent (eg., the moral worth of doctors is unquestioned, but bankers are a shifty lot), when values were traditional but not yet institutionalised (the State is “back East”), when the law was what a man made of it (sheriffs are just as often baddies as goodies), when prowess was a matter of personal honour, enacted always in dignity and ultimately in a test of lethal skills. 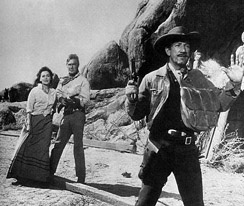 The heroes of the Western are figures of legend, but they are nearer men than gods (the place of women in this genre is secondary, even when they display heroic qualities; in addition there are odd examples of the genre where women strap on six-shooters – I can think of four films starring Barbara Stanwyck – but these are merely role reversals, not role critiques). Their stories have the form of romance, occasionally of epic (I’m using these terms in relation to literary tradition, not their rabid misuse by movie advertisers), but the finest examples of the Western myth are so heavily imbued with irony that the prevailing tone is one of disenchantment.

The heroes that the American public needed in the ’50s (and need no longer, it would seem) had, in the words of Norman Mailer, “the remote and private air of a man who has traversed some lonely terrain of experience, of loss and gain, of nearness to death, which leaves him isolated from the mass of others.” (Advertisements For Myself) But as the Western genre was reaching its most diverse and sophisticated phase artistically, its mythic relevance to the American imagination was about to go into eclipse.

Mailer’s words are exemplified in many of the films of John Ford and Howard Hawks with John Wayne, Anthony Mann with James Stewart, and Budd Boetticher with Randolph Scott. Although the figures projected by Wayne and Stewart are more robust and flexible, Scott is more of an aesthetic object while, paradoxically, closer to reality – in the limitation of his strengths and the probability of events. The craggy, weathered contours of the mature Scott visage, the steadfast gaze and the effortless carriage constitute a fine correlative of endurance and composure. Yet this admirable model of masculine stoicism can squeal like ordinary mortals when swabbed with liniment on a tender spot (you wouldn’t catch the Dook doing that!).

Scott produced six films in the late ’50s which were directed by Boetticher: Seven Men From Now, The Tall T, Decision At Sundown, Ride Lonesome, Comanche Station, and Buchanan Rides Alone (the only one with an allegorical structure and the only one not written by Burt Kennedy). Boetticher also directed Scott in Westbound, which is disappointing in comparison with the others, but Scott did not produce this one.

Kennedy’s characters, their values and their speech, were perfect for the Scott-Boetticher productions. They have the most laconic dialogue in any English language films, with deftly judged moments of lyricism: when Scott’s character in Ride Lonesome has sat up all night with a sick horse, one delinquent comments wonderingly “He says there’s nothin’ like the feel of the mornin’ sun to make you forget your hurts.”

The six Scott productions achieve a remarkable unity of tone and subtlety of variation on the themes of romantic wanderer, besieged hero, co-existence in the wilderness, wilful and diffident types of delinquency. The circumstantial affinities and interdependence between these figures and their codes of behaviour are examined through firmly controlled harmonics of personal and moral pressure. The themes are worked out within genre conventions by an austere directing style which progressively refines those conventions.

When one of the young delinquents in Comanche Station struggles to read the notice board at the stagecoach swing station, his companion, Frank, is mightily impressed: “I didn’t know you could read, Dobie”. When he wants to know which word is “Comanche”, Dobie effortlessly twirls his pistol and points with it. Frank takes the gunplay for granted but is moved to admiration by the esoteric skill of reading, even if it is “… not books, but signs and such…”. I may have made this example seem a major point, but it is directed as part of an ongoing event. Density of sub-text is a quality of Boetticher’s best work.

Boetticher’s grammatical precision and economy is never indulgent of the thrill of violence, the sentimentality of pastoral splendour, the macho supremacy complex or the righteousness of the spelled-out “issue”. Moral values are lived out, not argued out, victory is the outcome of nerve, not muscle, and a tarnished mirror is held up to the identification figure of the hero, with only fitful gleams of anything that might be called glory. Simply, a man’s done what he’s gotta do, and in the final line of The Tall T, incongruously reminiscent of Ozu, “It’s gunna be a good day.”

Boetticher’s films with Scott are fully engaging and satisfying at the realistic level (this can be disconcerting for myth hungry audiences), they have had to travel through the cycle of myth and romance in order to regain the normal plane of action. Every haggard expression, every gesture of weary resolve, every terse girding for action bespeaks the vulnerability of machismo. And yet that sweaty, squinting, harsh mannered presence also reverberates with the grander stirrings of the heroic.