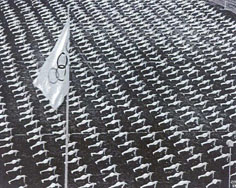 “It is my ultimate goal to establish the German film as the dominant cultural world power.”

The Axel Menges’ Architecture Art and Design series, comprised of large monographs, is an exceptional range. It is a pleasure to find an art book series unafraid of covering so many fields outside the traditional areas normally explored by the more familiar and conventional imprints like, for example, Thames and Hudson. It makes this series the best art/cultural studies list available. Felix Moeller’s detailed survey of the life of Reich Minister, Joseph Goebbels. and his malign influence on Nazi art practice comes with enough analytical weight and historical context to make it a standout in an already outstanding series.

Certainly no other politician in the history of cinema – let alone other fields of art – has exerted such power on filmmakers as Joseph Goebbels, Propaganda Minister to Adolf Hitler’s Third Reich. As Moeller makes clear, Goebbels was, in a sense, his own most disturbing and misshapen creation. Moeller himself is something of a specialist in the Nazi period and there are certainly moments when the work can seem a little too like a doctoral thesis revisited. As when Moeller asserts: “So sources have to be addressed critically if we are to get on the track of the ‘minister of illusion’, probe his motives and distinguish genuine information from whitewashing” (p.11) The reader can be excused for feeling that the author expects a mark for the pedagogical solidity of the work. But the sheer scope of this alarming history of Goebbels, along with the many incidental horrors of the reign of the Third Reich, soon sweep away such doubts.

This is a weighty work, using Goebbels’ own diaries, public and private photographs, and a large mass of information, previously unavailable. Indeed the range of historical resources is exemplary, and includes documents listing propaganda strategies, script extracts from planned anti-Semitic feature films and masses of inter departmental correspondence. Much of the evidence here surprises as damning and cold testament to the ability of Goebbels to map out propaganda strategies that invaded every field of the arts. The foreword by Volker Schlöndorff puts the book firmly into the public rather than academic arena: “Goebbels is more fascinating today than Hitler – at least to media people. No one has ever had such exclusive power over all the media in existence at the time and never has someone in a position of responsibility pursued his task with such passion as that of a frustrated artist.” (p. 8)

Luckily for us all, Moeller’s own writing, after the agenda setting remarks of his introduction, is run at a sprint. There is a thriller–like fascination in the seemingly endless lists of artistic bullying. Goebbels’ propaganda ‘screen credits’ have now and forever provided the ultimate and inescapable models of the effects on art production of a ruthless sponsor.

Naturally the case of Leni Riefenstahl (still so open a question 60 years on) is a real test case in judging the usefulness of this work. Moeller is very concerned to track down all the real evidence available and to sift it thoroughly. Here again, Goebbels’ own diaries are instructive. Leni was: “the only star who understands us” (Goebbels, p. 177). Moeller also looks at Ray Müller’s 1993 film documentary Leni Riefenstahl – The Power of the Image, which included Riefenstahl’s own commentaries and heated defenses of personal and social contacts with National Socialist leaders before even the “seizure of power” in 1933. Moeller’s book locates and highlights the major contradictions in Riefenstahl’s claims and denials since the end of the war.

The methods Moeller uses are painstakingly historiographical, supported by a dazzling parade of footnotes and sources. This is certainly the work to end all arguments and alibis about ‘fellow travelling’ with the Nazis. The selection of letters to the Reich Minister and the Führer from a vast army of artists is telling, and actors seem to have been particularly prone to snuggling up to the Minister.

Just as fascinating is the case of Goebbels and Marlene Dietrich, who fled to America before the war and kept up a steady stream of public criticism of the Nazis. Yet Goebbels (in his diaries and letters at least) seems never to have had an unkind word for Dietrich and noted on the basis of some reports from an emissary in Paris that: “Marlene cannot appear in Berlin for a year. But she remains committed to Germany.” (12 Nov ’37, p. 179) This is a belief that was contradicted often by Dietrich herself both before, during and after the war (see Stephen Bach Marlene Dietrich, Leben and Legende 1993: 232ff). In general, however, Goebbels exerted both a constant influence on and took an almost obsessively detailed interest in (like some stalking fan – but a deadly one) hundreds of artists who might have been of use to the Reich – especially in the vital film work.

The Film Minister is illustrated with extremely well-chosen photographs that clearly belong more to the general, un-posed sort than the usual publicity stills. They enliven a text that at times is so careful to sift and monitor primary sources that the reading of it could otherwise grind to a halt in a flurry of footnotes.

Some of Moeller’s most illuminating reflections deal with Goebbels’ own personal tastes in movies. The Film Minister tended to be reflexively critical of genres such as detective movies, comedy revues or films of ‘peasant life’. But this, as Moeller argues, may have been because he himself was very much an urban creature with a clear belief that his tastes were elevated above the ‘vulgar’. Equally interesting is the way in which Goebbels developed an eye for what he thought of as ‘poor’ film acting. But in the end it was the use to which films could be put (rather than any necessarily aesthetic qualities) that delighted the Minister. Of course if Art was present, too, that was fine: but never so much of it as to obscure any more positive messages about the glories of the ‘vision of the Third Reich’.

The Film Minister covers what seems like every possible aspect of Goebbels’ beliefs and his profound effect on what German society heard and saw in the media throughout the life of Hitler’s deluded dynasty. Every key player in Goebbels’ dark universe, from Werner Straub to Leni Riefenstahl, from forgotten actors like Zarah Leander (herself Swedish) and theatre and radio ‘stars’ line up here for interrogation and few get away without incriminating themselves.

Felix Moeller has assembled a remarkable cast of those implicated (some fairly, some unfairly – and he’s careful about this) in the rush of the Third Reich to the precipice of History. In the end the very level of detail and illustration provides a living resource and an ethical balance sheet that should still concern every filmmaker and state-supported artist today.