Since this review is not a favourable one, I should disclose that I was sacked from the cast of the producer-director’s previous film for “artistic differences”.

In a recent issue of Senses of Cinema, I was moved to high praise of David Caesar’s Mullet (2001) for its authenticity of representation, subtlety of insight and refusal to condescend to its subject: that vanishing species, Old White Australia. Despite the achievement of Mullet and its honourable predecessors in the 1970s, the species may become extinct before it is rescued from its lowly dramatic status as either comic relief, when we laugh at not with them, or victim slumming, which excuses itself as “serious drama”. (Test this on your own practice: a small step toward that extinction is taken every time vernacular speech prefers “guy” to “bloke”.)

Alkinos Tsilimidos’ film version of Daniel Keene’s play falls into the traps which have long beset “educated” Australia’s representation of “broad” Australia: exaggeration, antipathy and the presumption of audience superiority over the colony’s home grown version of Cockney. For generations past, fiction, theatre and the movies have utilised Ocker (the way of life, not the accent) as the antipodean form of stage Cockney.

Keene’s play on the page is open to different approaches to its subject matter. The film opts for naive realism (gritty detail, tactile surface) based on a false distinction between stage and screen and blunders into the paradox that getting close to the characters physically emphasises our psychological distance from them.

Many of the differences between stage and screen drama relate to matters of usage not aesthetic imperative. This is not to ignore that economic rationalism underlies usage, e.g., small casts in contemporary plays, predominance of talking-head singles over long takes in film and especially television. And usage, by definition, is normative. So a cultural factor – money, or the shortage of it – has determined much of general misperception of natural differences between stage and screen. 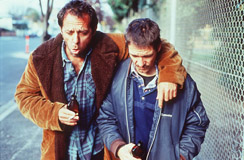 Tsilimidos chose to retain the play’s restriction of speaking parts to the two characters John (David Field) and Bill (Syd Brisbane) (though the eponymous greyhound gets some camera attention too). This was a bold aesthetic decision, as two-handers require a more exacting command of framing, camera moves, eye lines, shot duration and cutting points than films with larger casts. It is in the exercise of these techniques that the nature of film is different from that of theatre. The fact that most movie audiences are soon bored by starless talkfests is another matter, a cultural difference which could (but never will!) be modified by usage.

Speaking generally (there are always exceptions) stage drama permits the audience to hold both speaker and listener in view (in their “frame”). If the stage director wants preferential attention on one character rather than the other, this can be done by use of lighting and decor, but these resources on stage are considerably less sophisticated than possibilities available to camera. Stage drama is more likely to rely upon the continuum of the dialogue and performance technique, both of which tend to be more sustained and more emphatic but less nuanced than (good) screen writing and acting.

The screen director at will can choose singles which frame out one of the characters in a two-hander. It is no longer a matter of accentuation and audience preferment as it is on stage; now the audience is denied control over the choice of its own attention. This is literally an awful responsibility, because it is an awe-full power that the film director has over her/his audience.

One of the unresolved problems in the film of Silent Partner is that its dialogue retains its theatrical continuum, building and distributing dramatic attention by the conventions of the stage, but its direction frequently forces attention, overrides audience freedom, by arbitrarily alternating between singles. And when the action is covered in two shot, the director’s choice of what to frame and when to cut does not seem to coincide with significant shifts or “steps” in the dramatic current. Yet this is the basic principle of classical narrative cinema.

Of course there was no obligation on Alkinos Tsilimidos to observe this well tried and stylistically versatile orthodoxy, but his departures from it do not gain in impact or insight. They seem opportunistic, not systematic; the direction has no style (whereas the opportunism of, say, Godard always implies a systematic approach). Although two-hander feature films are infrequent, there are numerous examples of directors making an artistic success of films composed mainly of two handed scenes: von Sternberg, Bresson, Hitchcock, Rohmer, Akerman, etc., have done it.

Since John does a lot more talking than Bill in Silent Partner the audience sees a lot more of him. The dominant-submissive interplay which the playwright labours to construct in words is massively overdetermined by the director-editor’s unimaginative choice of shots.

Overdetermination goes even further with David Field’s self indulgence in the role of John. Overacting doesn’t have to be especially loud or energetic. A skilled actor’s resources of voice, face and body can have many components and variations, and Field proves that he possesses many. The problem is that he uses more than the job of characterisation needs. Artistic economy is about the judicious spending of resources. If an actor spends two units of expression when one would have done the job, that’s inflation, artistic inflation. And when he spends three…! Skill is not only being able to do something but judging when to do it.

The character of John becomes a grotesque which clashes stylistically with Syd Brisbane’s realistic (economical) portrayal of Bill, a different personality but an exemplar of the same sub-culture. I did not find the bond between this John and Bill convincing because the performances are on different planes of representation/credibility while dialogue, lighting, decor and cultural inference are all on one plane. The music is somewhere else again. I thought I knew this sub-culture because I grew up in it, but the intrusive slabs of music felt alien to my ears – “guy” stuff rather than “bloke” stuff.

The ascendancy of John over Bill, which is an important part of the exploratory matter of the drama, is hi-jacked by direction and performance putting themselves on display at the expense of dramatic logic. Some of John’s speeches are treated as quasi monologues; there is little sense of interaction with Bill until the next development in the story line arrives, usually signalled by a flurry of short line bantering. These are useful markers in a stage production and they are genuinely amusing, but on screen their contrivance shows. As does the fact that the narrative develops but the characters don’t.

Silent Partner was made under difficult conditions, with admirable commitment by everyone. Alkinos Tsilimidos has risen above obstacles and disappointments to follow his own path in a business that wastes what it doesn’t devour, and he’s still there, determined not to be one of the casualties. Culture needs artistic diversity as the environment needs biodiversity. I think his film is deeply flawed but deserves an audience. Australian film culture needs variety more than it needs excellence if it is to regain even the shaky autonomous ground it held in the 1970s.