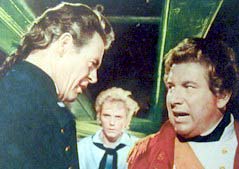 Herman Melville’s last work, the unfinished novella Billy Budd, has been a source of inspiration to adapters who have translated the work to the theater and opera stages, as well as to television and film. Melville’s work is open to an almost infinite variety of interpretations — ranging from Christian to homo-erotic — and permits creative artists to put their interpretive spin on the story of a beautiful, stammering young sailor’s accidental killing of a sadistic superior and the agonies undergone by the ship’s captain who must deliver the death sentence. Most recently, Claire Denis’ superb rendition of the story Beau Travail (1999) reset the story in the French colony of Djibouti and set the dangerous triangle in the contemporary Foreign Legion. Denis made the inspiration for her film overt by using Benjamin Britten’s 1951 opera Billy Budd on the soundtrack, most notably in the extended sequences of the Legionnaires’ ritualized physical tests of strength. Denis’ creative rendition of the destructive (and self-destructive) consequences of all-male institutions may threaten to overshadow the first film version of Billy Budd, now almost 40 years old. But Peter Ustinov’s film is still worth some attention because while it sincerely and painstakingly attempts to render the story in traditional ‘well-made’ realist terms, and serves as an exemplar of the internationally cooperative cinema industry post-war years of an, it also contains a compelling performance by a debut film actor that helps signal the beginning of the 1960s as a new, libratory age in British and American cinema and culture.

In his 1977 autobiography Ustinov recalls that he “gave the part of Billy Budd, the embodiment of good, to an unknown — a hesitant, uncertain young actor named Terence Stamp.” (1) Ustinov claims that while the film was a “blessed” experience while in production, it was only in post-production that executive producers, distributors, and John Trevelyan of the British Board of Film Censors determined that the film was unmarketably downbeat and excessively violent and ordered cuts. While the film earned good critical notices, it was a box office failure. Marketed as a period adventure yarn (“The Men! The Mutiny! The Might!”), the film died a death at the box office on both sides of the Atlantic in 1963 but propelled Stamp to an international career that endures into the present (most recently in Yvan Attal’s My Wife is an Actress [2001]).

In his debut, Stamp commands the screen in opposition to his antagonists, Captain Vere (played by Ustinov) and Mister Claggart (Robert Ryan, whose American accent seems out of place, but belongs to an actor of great authority in the role). Adopting a West Country accent, Stamp is permitted, rightly, to be the center of attention in the film’s diegesis. Ustinov frames the blonded, androgynous beauty in the middle third of the frame in a preponderance of the group shots to suggest Billy’s power of attraction. Significantly, in the scenes set below deck during the inquest and court-martial and at his execution, Stamp is relegated more to the margins of the frame as he is overpowered by the machinery of “military justice” that demands his sacrifice. Stamp is never more seductively photographed by Robert Krasker’s camera than in the extended scene with Ryan’s Claggart when the two are alone on deck at night and Billy unselfconsciously charms his nemesis, who suggestively remarks “I suppose the handsome sailor may do many things forbidden to his mess-mates.” In the alternating succession of medium close-ups Stamp is lit with enough key and fill light to accentuate his cheekbones (crossed at times by one strong shadow), while Ryan is made insistently sinister and inscrutable by shadowy side lighting. While Ryan often sneaks into the shots or is presented initially by a fragmented body part (foot or backside), Stamp is alluringly whole, his lithe and lean body shot directly without expressionistic angles, the object of everyone’s direct gaze, especially Ryan’s. Referring to the inscrutably repressed Claggart, guileless Billy wonders “Why is he so friendly to me?” Audiences, captive to the mystique of cinema images, have a pretty ready answer.

While Ustinov’s film was never intended as a star vehicle, and the film adheres earnestly to its identity as an ensemble piece, Stamp’s obvious power of attraction makes the film live on. Stamp was one of a number of British working-class actors born in the 1930s who quickly established their appeal to cinema-goers in the Sixties, when British cinema asserted a powerful new influence and popularity. These audiences were getting increasingly younger and more ‘mod’ and created new male stars to reflect that generational shift (Michael Caine, Albert Finney and Sean Connery all come readily to mind). Impressing Billy for H.M. S. Avenger injects new blood into the life of Vere’s crew; Stamp’s casting injects a vital force into a traditional literary film that benefits from his charisma and fascinating beauty. Half a decade later, Pasolini’s Teorema (1968) most effectively exploited Stamp’s power to inflame desire within institutions designed to repress it. But Ustinov’s successful direction of the ‘hesitant’ newcomer in Billy Budd gave the cinema its first glimpse of a great star who went on to symbolize the free-wheeling counter-cultural impulses energizing culture in the 1960s.