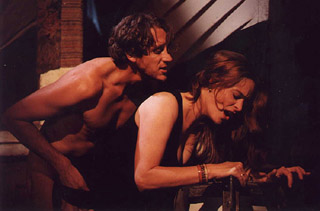 When you start wanting to make movies, you don’t know about the heaven and the hell. Moviemaking looks purely fascinating from the screen’s silver side. It enchants you, it hypnotises you, it inspires you. When you finally get to look behind the screen, moviemaking does something it never did on the silver side – it exhausts you. And tries to kill you, too.

Sensitive New Age Killer (2001) tried to murder producer John Brousek (The Wog Boy, 2000) and myself, its director/co-writer. A film is like the Boston Strangler with arthritis. It wants to get that rope around your neck and it tries its hardest every day of the week (Sunday included), but it’s not quite nimble enough and it doesn’t know that we know what it’s up to.

The script came out of reality. A director needs a decent film in the can to make another film. That first film – the “legit” one – is proof that you can make a movie. It’s there to tell “the industry” that you aren’t a complete screw-up and can spend millions of dollars responsibly. In Sensitive New Age Killer, a hitman needs to do one big “hit”; that “hit” will then be proof that he can efficiently terminate a bad guy. Local crime barons will then know that our hitman isn’t a complete screw-up. Out of this semi-biographical scenario emerged a tale of thwarted ambitions. In order to become a hitman, our hero needed to be a prick. Since our hitman isn’t a prick, his road to success becomes a troubled one. The Sensitive New Age Killer script stuck with this metaphor. And the shoot followed its reality.

Three-fifths of Sensitive New Age Killer‘s budget fell away about a month prior to shooting. Since we were already waist-deep in pre-production, we decided to proceed, anyway. We rented an office and assembled a passionate crew of technicians and artisans. Though everybody was paid the legal minimum, nobody did it for the money.

The days stretched into nights for the film’s key movers and shakers. The weather favored us for the most part and principal photography moved forward in an army-like fashion. As a director, you are constantly pushing forward something huge and unwieldy. Everybody working with you becomes your family and your allies. Brousek wore invisible armour plating during the shoot and into post-production. He had the unenviable task of being the film’s Mr. Bad Guy. He dug out enemies, negotiated with the captains and ran a tight financial ship.

If you were to present a film project realistically to a novice, you would open a folder containing one million tasks with little square boxes beside them. You would explain that making and showing a film requires that you complete and tick off each one of the required tasks. Most people would probably not make movies if they knew about those million boxes.

Although the shoot was heaven, there was still room for hell because the hours are a killer. The time frame is murder, too, because each new day brings new set-ups which, although years in the planning, must be confronted and knocked on the head sometime before lunch. I find it bizarre that there is so little time to accomplish so much. After all, images are (hopefully) forever!

The process can be hell. The result can be heaven. In filmmaking, you get a taste of heaven, but you do not get to gorge on it. That heaven, found here on earth, lies in the way two images cut or in the organic chemistry of a great performance. There is magic to be found within the four walls of a frame. There is beauty to be experienced when music marries the most delicate movement.

It is hellish to get to heaven, that is true. But that is why heaven exists – so we can go to hell with a smile of hope on our faces.