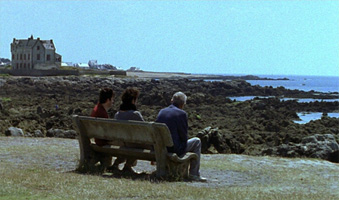 The Berlin Film Festival has always struggled with an inferiority complex in regard to its better-known rival, Cannes, which for starters takes place on the Riviera in May and not amid the frozen reaches of northern Germany in February. But once you get beyond that very obvious and often painful geo-meteorological fact of life, Berlin – with its 300 films and, according to the delightfully Germanic precision of the Festival staff, some 126,000 minutes of celluloid and digital images—is actually a wonderful place to get a sense of the Contemporary State of International Cinema.

It’s of course impossible to see everything, and most participants are content to see even a tenth of what’s available. First of all, there are the 25 films in the competition which, if never as glamorous or, frankly, as important as the Cannes competition, usually offers a bevy of eminently watchable films. Plus, Berlin does have one advantage over Cannes, and that’s that Hollywood studios prefer to launch the European release of their films in February rather than in May.

Though I had already seen all the American films, being myself an inhabitant of that currently nearly universally despised country, the fact that this was a great year for Hollywood meant some great viewing for European critics gathered here. Such fine or near-fine films as Adaptation (Spike Jonze, 2002), The Hours (Stephen Daltry, 2002), Confessions of a Dangerous Mind (George Clooney, 2002), 25th Hour (Spike Lee, 2002), Chicago (Rob Marshall, 2002), Gangs of New York (Martin Scorsese, 2002) and Solaris (Steven Soderburgh, 2002) studded the competition and gave local critics less reason to be angry at us. (The presence of Hollywood glamour in the persons of Renée Zellweger, Catherine Zeta-Jones, George Clooney, Edward Norton, and Nicole Kidman didn’t hurt either.)

Noted filmmakers Michael Winterbottom and Zhang Yimou also had well-received films in the competition, but as the Festival is invariably front-loaded, and as I invariably arrive late, I saw neither. Winterbottom’s film, In This World (2002) is a docudrama about two Afghani men seeking illegal entry into England, an appropriate topic given Festival director Dieter Kosslick’s featured theme “Towards Tolerance.” The film went on to win the Golden Bear, awarded by an international jury headed by Canadian auteur Atom Egoyan. 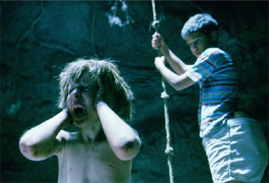 Another noteworthy film in the competition was I’m Not Scared (2002) from Italian director Gabriele Salvatores, who is best known all over the world for his 1991 Mediterraneo. Some critics complained that this story about a kidnapping told from a child’s point of view was sentimental, but virtually all films with young protagonists are inherently open to this charge, of course. Salvatores’ magnificent rendering of the child’s wonder at the natural world redeemed any putative softheartedness and let us adults catch a life-enhancing glimpse of this world as well. Another Italian film called Pater Familias (Francesco Patierno, 2002) (part of the second, and biggest, section of the Festival, the Panorama), a tale of revenge and blighted lives set in the rough neighborhoods of Naples, sported the real Neapolitan dialect, but was marred by an overblown score that worked against the film’s otherwise powerful themes. Promising neophyte director Patierno needs to learn that neo-realism and Tarantino just don’t mix. Brazilian director José Enrique Fonseca did better in the stylish gangster film Man Of The Year (2002) by opting wholeheartedly for Tarantino, spruced up with some of that Rio bravado that was so powerful in Fernando Mireilles’ City of God (2002), which has recently entranced audiences around the world.

Four English-language films left me with mixed emotions. The best of the lot was My Life Without Me (2002), which starred the increasingly polished Canadian actress Sarah Polley and was directed by the Catalan filmmaker Isabel Coixet. This potentially lugubrious tearjerker (a young wife and mother finds out that she has terminal cancer and makes a list of all the things she wants to do before she dies) was saved by Coixet’s unsentimental, exceptionally well-written script and by Polley’s luminous acting. Polley has come a long way from the precocious teenager of The Sweet Hereafter (Atom Egoyan, 1997) and Guinevere (Audrey Wells, 1999) and now maybe she will stop telling reporters that, like Daniel Day-Lewis, she’d rather do anything than act. She is a natural and needs to keep doing this if only for our sake and not hers.

Another film in English was Owning Mahowny (2002) yet another Philip Seymour Hoffman vehicle (he is getting dangerously overexposed), based on the true-life story of an embezzling banker from Toronto with a gambling problem. Directed by the enterprising Brit Richard Kwietniowski, the film represents something of a sophomore slump after the stylish Love and Death on Long Island (1997). It’s surprisingly plodding and since it travels some of the same territory as Catch Me If You Can (Steven Spielberg, 2002) suffers by comparison. Pure (2002) made by the under-appreciated Scottish director Gillies MacKinnon (Regeneration [1997], Hideous Kinky [1998]) disappointed as a kind of Ken Loach-lite, working the same grimy London slums and dysfunctional families, but leavened with an upbeat, perky score and a happy ending. The real joy in this film is the new discovery, 10-year-old Harry Eden, who’s at its center. You can’t take your eyes off him, and his scenes with his junkie mother (the always reliable Molly Parker) are immensely convincing (until the uplifting score chimes in again).

The worst of the English-language lot was perhaps most disappointing because its first half promised so much. This was Rolf de Heer’s Alexandra’s Project (2003) which showed in the competition near the end of the Festival. The estimable Dutch-born de Heer, who has lived in Australia since he was eight years old, and who created a sensation on the festival scene with earlier films such as Bad Boy Bubby (1993), The Quiet Room (1996) and the uncompromising Dance Me to My Song (1998), is at the top of his game here – but only for the first 45 minutes. Watching this microscopic depiction of an ostensibly happy middle-class Australian family, laced with dark undertones, the Berlin audience was palpably caught up in de Heer’s masterful creation of suspense, only to be disappointed when the film self-destructs with ’70s-style feminist complaints and a sagging, unconvincing central character arc.

I only got to see a few Asian films, alas. Two of them were Hong Kong genre films, PTU (Johnnie To, 2003) and Infernal Affairs (Andrew Lau & Alan Mak, 2002). I know it is a serious personal failing on my part, but I just can’t figure out why so many otherwise serious intellectuals are so taken by these slick, repetitive, empty, sentimental, shoot-em-up-bang-bang movies. Much better was Yoji Yamada’s quiet Japanese film Twilight Samurai (2002), which concentrated for once on a member of the lowest stratum of the samurai world, a good man who can barely support his family. It’s a modest, contemplative look at the end of the world of the samurai in the 19th century, enhanced by a touching love story, and it was one of the best films I saw at the Festival.

A couple of other offerings showed that the film industry is still alive and well, despite the worldwide recession, in diverse European and Asian countries. The Suit (Alberto Rodríguez, 2002), a diverting Spanish film that I wandered into by mistake (thinking that it was The Suit [Bakhtiar Khudojnazarov, 2003], a heavily promoted Russian film that I never got to see) focused atypically on black characters, feeding into the Festival’s “Towards Tolerance” motif. The Swedish comedy Jonny Vang (Jens Lien, 2002) which explores the fun of small-town adultery and was lit up principally by the dead-pan, sprightly acting of Aksel Hennie, who plays the title character. Germany surprised foreign critics with an overly long but well-done bittersweet comedy with a droll bite, a film called Good Bye, Lenin (Wolfgang Becker, 2002). It’s set in East Berlin just before the collapse of the Wall. A militantly political woman goes into a coma and miraculously recovers eight months later. The doctor warns her family, however, that any shock will affect her weak heart, so her devoted son and daughter spend the rest of the film recreating the now-dead East Germany in her sickroom, on her television, and outside her window. Upon this rather unpromising premise is constructed a delightful story that contains a surprising number of touching moments as well. Just as good was Spare Parts (Damjan Kozole, 2002) a Slovenian drama in competition about some thugs who clandestinely transport refugees across the border into Italy; the best thing about it was the familiar cynical edge that has always, and so happily, animated Eastern European cinema.

The most amazingly diverse group of films at the Festival turned out, as usual, to be in French. The least interesting came from the most famous director, Claude Chabrol, who has, since 1958, made way too many films for his own good. Once again, he’s on familiar territory with La fleur du mal (2003), a story of murder in a bourgeois household. But despite a heroic performance by veteran Nathalie Baye as a would-be politician who defies her controlling husband, there’s no there there. Some interesting themes about intergenerational guilt are nodded at, but never delved into. Chabrol fans will claim that it’s all subtext, but for the subtext to work, the text itself, that which is evident on the surface, has to be at least passably interesting. This text isn’t. 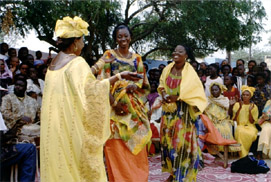 Another French film in competition hailed from Senegal, the lively and colorful Madame Brouette (Moussa Sene Absa, 2002) which cloaked its welcome message about female empowerment in a funny murder mystery. As with much African cinema, its most interesting aspect was a kind of Brechtian mixing of reality and artifice, represented here in the griot group that accompanies every scene providing sung commentary, harkening back to the chorus of ancient Greek drama. A big-budget, handsomely mounted French-British co-production which should have been in the competition rather than banished to Panorama was Antoine de Caunes’ Monsieur N (2003), a deliciously complicated study of Napoleon’s last days on St. Helena that is turbo-charged by a police procedural plot that considers whether or not Napoleon was poisoned by his British guards.

Perhaps the high point of the Festival, though, was the utterly downbeat but brilliantly realized Son frére (2003) directed by the always deadly serious Patrice Chéreau. Formerly an opera director, Chéreau now says that he will forever stick to filmmaking, and his work, while occasionally over the top, has always been challenging in the best sense of that word. He first came to international notice with the in-your-face Queen Margot (1994) a 16th century drama which starred Isabelle Adjani and Daniel Auteuil, followed by Those Who Love Me Will Take the Train (1998) and Intimacy (2000) which won the Golden Bear in 2001. This year, Chéreau was back in Berlin with a delicate film about a dying man and his love-hate relation with his younger brother. To describe this film, I can’t do better than quote from Chéreau’s own words, reprinted in the catalogue

Son frére is a film about the body; about the disintegration of a body and about faces. It is a film about silence and about enforced chatter. It examines the skin, its folds and its furrows, its fine hairs and beads of perspiration. It is also an exploration of bruises, reddened scars, suppuration and stains on the bedclothes. It is a still life – a Nature Morte.

I can’t imagine anyone actually wanting to buy a ticket to see this film, but I haven’t been able to get it out of my head and I don’t imagine I ever will.