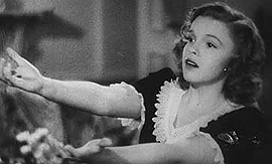 See the tail of this article for a brief biography and filmography of Martin Arnold and distribution details for his films.

The cinema of Hollywood is a cinema of exclusion, reduction and denial, a cinema of repression. If pièce touchée expresses sexuality and passage a l’acte aggression, then perhaps Andy Hardy finds melancholia.

Alone: Life Wastes Andy Hardy comprises, along with pièce touchée (1989) and passage a l’acte (1993), what Dirk Schaefer has called “a trilogy of compulsive repetition”. Arnold’s signature style applies the technique of forward-and-back looping – images repeated in a kind of two steps forward, one step back pattern – to banal interstitial sequences from classical Hollywood films, propelling the characters through a scene in stuttering slow motion. The repeated gestures are indeed made compulsive; frozen and replayed, they seem to capture moments of unconscious desire and repression unwittingly trapped between the 24 frames per second which ground cinematic movement. Arnold, trained in psychoanalysis in Vienna, carries Freud’s investigation of the “Psychopathology of Everyday Life” into the placid surface behaviour of the classical film text, shattering those carefully contained fantasies by elevating them to staged psychic tableaux. Moreover, Arnold’s virtuosic image and sound editing creates a hypnotically rich rhythmic visual and sonic field which lends both grace and savagery to the films’ analytical work. The physical vitality re-found in the image, accompanied by equally complex variations on the soundtrack, make his films work as dance and music as much as ironic inquiry.

If melancholia is the affect sought by Arnold for Alone: Life Wastes Andy Hardy, its structural base is the Oedipal drama, which he stages by drawing on the unlikely source material of the Andy Hardy film series (more than ten films released between 1937–1958). Andy Hardy (Mickey Rooney) is the male child, Mrs. Hardy (Fay Holden) is the Mother, Judge Hardy (Lewis Stone) literally stands for the Law of/in the Father, and Betsy (Judy Garland) is Andy’s object of desire. The film takes scenes of mundane character interaction and, through frame-by-frame analysis, lends them Oedipal sexualisation and psychic intensity. Notably, Arnold takes Freud’s standard model and reasserts emphasis on a largely missing component, female desire, as the only segments of the film which feature single characters feature Ms Hardy and Betsy. Alone: Life Wastes Andy Hardy undercuts the title’s insistent isolation of the central male character by lending weight to the Mother’s desire, and by making Betsy/Garland, rather than a mere object of desire, into a subjective and desiring presence.

In the first sequence of the film, Andy’s casual peck on Mom’s cheek becomes a drama of sexual excitement and urgency. The kiss is magnified; his body seems to thrust into her as her face exhibits longing and sensuality in the flickering of her twitching lip. Such back-and-forth manipulations of gesture are, of course, easy to turn into low comedy, and are a staple of satiric found footage films like Germany Calling (Lambeth Walk) (Charles Ridley, 1941), a British propaganda film which turned Hitler and Nazi goose-stepping soldiers into ridiculous foils. Yet, while the film is happy to mine comic elements, it is intent on discovering more sublime expressions of emotion in a subtle choreography of unconscious kinetics. Thus, while it looks like Andy is simply “humping his Mom, ha ha”, the scene also gives expression to the Mother’s desire as Holden’s heavy-lidded eyes and sighs suggest a sensuality caught in pensive regret at her treatment in the hands of Rooney’s callow youth. At the end of the scene, as he does throughout the film, Arnold isolates dialogue which nails the Oedipal subtext: to Mom’s “Andy?”, Andy responds, “Yes, Mom”, setting the stage for the son’s subsequent rebuke at the hands of his father in the second sequence. Here, Andy’s father slaps him, exclaiming “Shut Up!” Arnold loops Rooney’s crestfallen response to this punishing, censoring voice, as he assents (“Alright. . . Dad”) to the Father’s dictates. The film exacerbates the violence of the father’s slap by allowing it to proceed in real time, not allowing the characteristic slow motion stutter to cushion the emotional violence.

In Freud’s normative Oedipal model, the male child who desires his mother but fears the castrating wrath of the father displaces his desire onto another woman. In the third tableau, Betsy/Judy Garland appears, singing Alone: “Alone on a night that was meant for love / There must be someone waiting who feels the way I do.” The words“alone”, “love”, and “waiting” are looped, emphasising their resonance with the desiring Oedipal subject, alone, loving, and forced to wait for a ‘proper’ object of desire. However, Arnold emphasises Betsy/Garland’s desire as much as Andy’s: the sheer length of “her” tableau, as well as its emphasis on voice, so iconically bound to Garland’s image, marks the richness of her desire.

The fourth tableau returns to Andy and his mother, with Mom’s perversely excited gestures contrasted with Andy’s sheepish expression; as he stands up to leave, she asks, “Where are you going, son?” to which he replies, “You know where I’m going”. The fifth tableau then immediately returns to Betsy, establishing her as the displaced figure of desire. After she sings, “Alone, with a heart meant for you”, we hear Andy off-screen shout, “Get ready, Betsy, here I come”, announcing his entry into what Freud terms “mature sexuality”. Andy appears from a doorway dressed as an exaggerated adult in top hat, tails, and walking cane (which he rubs suggestively at groin level while Betsy lowers her hands). He asks, “Ain’t I something?” – the subject affirms itself! – to which Betsy replies, “Andy, you’re beautiful”.

The sixth tableau intercuts Mom with Betsy, as the mother “reacts” to the appearance of Andy’s love object with gestures that shift, through Arnold’s frame alternation, from horror to contented happiness. Arnold captures both the blatant sexuality and the emotional ambivalence that characterises the Oedipal dynamic.

The final tableau finds Andy and Garland united in the final kiss that signifies the end of the romance. The formation of the couple that functions as the culmination of Hollywood Classical narrative is the culmination of normative heterosexual desire. But even here, Arnold finds a promise of disruptive energy as this chaste kiss erupts into nervous breath and sexual acknowledgement.

Martin Arnold’s trilogy is an important contribution to the tradition of “found film films”, one of the most vital sub-genres of artists’ film in the last two decades (see Hausheer and Settele, and Wees). Found footage filmmakers mine the unconscious of film footage, whether it be the psychosexual unconscious that Arnold exposes, or the political unconscious uncovered by filmmakers like Emile de Antonio and Bruce Conner. Starting with the scaffolding of the orthodox Freudian Oedipal narrative, Arnold finds in the archetypal American family drama (the Andy Hardy film series) a drama of desire, repression, and lyrical ecstasy which bursts the bounds of that orthodoxy to express multiple and troubling desires.

Martin Arnold was born in 1959 in Vienna. He studied psychology and the history of art at Vienna University. He has been a freelance filmmaker since 1988. Since 1995 he has held positions as a guest professor at the University of Wisconsin (Milwaukee), San Francisco Art Institute and others.