Laleen Jayamanne’s beautiful new book, Poetic Cinema and the Spirit of the Gify, enlivens the spirits of its readers every bit as much as the movies it discusses enliven both the spirits and the bodies of their viewers. The book’s scholarship is careful and rigorous, but also thoughtfully evocative, as it discusses a number of anomalously brilliant cinematic works. Jayamanne’s selection of movies to discuss is notably idiosyncratic. She gives us close analyses of G. W. Pabst’s Die Büchse der Pandora (Pandora’s Box, 1920), Sergei Parajanov’s The Colour of Pomegranates (1969) and Ashik Kerib (1988), Stanley Kubrick’s Eyes Wide Shut (1999), and Raul Ruiz’s Klimt (2006). These films and directors do not make up anything like a tradition or a line of influence. They are rather a set of singular points, as Gilles Deleuze would say, and one of Jayamanne’s accomplishments in this book is to show how strongly they resonate with one another, despite (or across) the wide gaps and differences between them. Jayamanne does not propose a new cinematic canon, so much as she suggests how each of these disparate films is exemplary in its own manner. 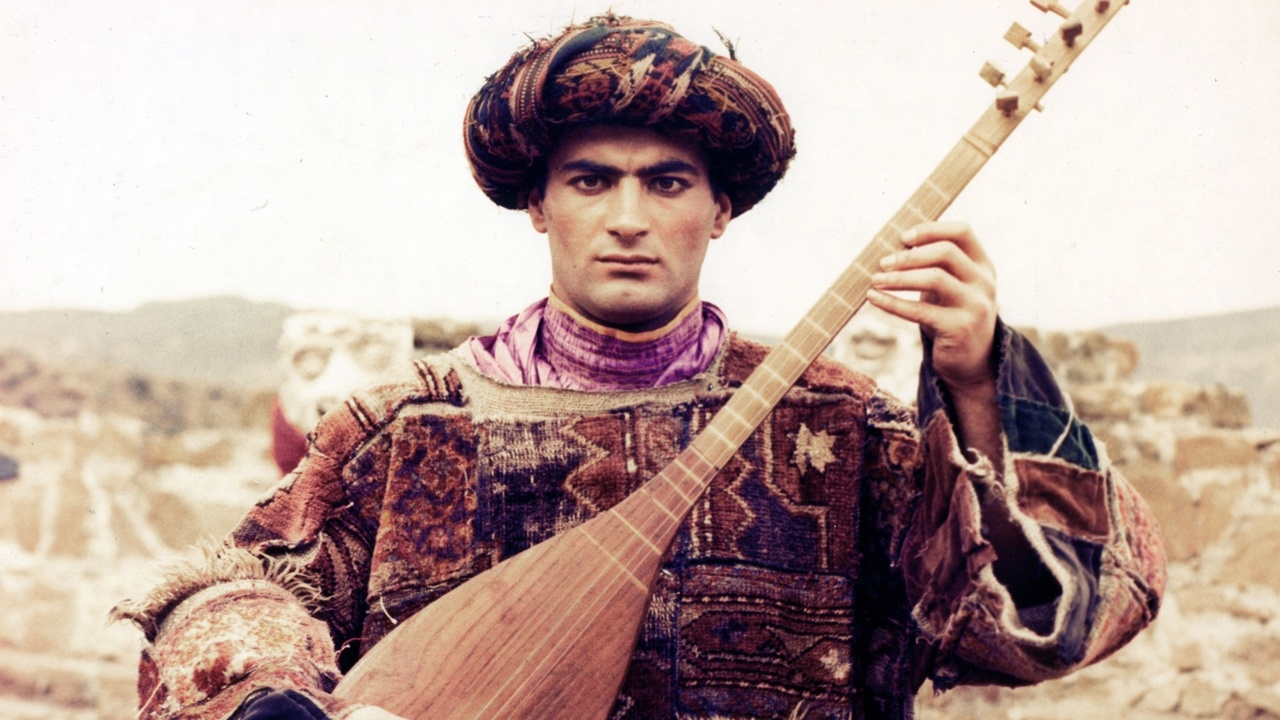 Poetic Cinema and the Spirit of the Gift is a work of film theory, as much as it is a work of practical criticism. But Jayamanne proposes her theoretical insights with a light touch. This is part of what I meant when I said, just above, that Jayamanne treats all of the films she discusses as exemplary. Immanuel Kant says that great works of art are always original; they can not be imitations. They are not made following any pre-existing rules; and yet they are sufficiently orderly and non-random that they seem to be made according to rules of their own invention. In this way they seem like examples, but that of which they are examples does not exist anywhere apart from or prior to themselves. This means that they also seem exemplary in the sense that they invite us to imitate them in turn. But the only way to create something genuinely new, Kant says, is not to imitate previous great works, but rather to emulate the way in which they reject previous rules and models, and create new ones of their own.

In just this way, all four of the directors discussed by Jayamanne create their own aesthetic principles alongside, and embedded within, their own particular films. Moreover, Jayamanne uncovers these principles within her readings of the films themselves. All of the films she discusses are pedagogical, in the sense that, as we watch them, they teach us how to apprehend and enjoy them. And Jayamanne in turn links these cinematic pedagogical practices to her own pedagogical practices as a (now retired) film studies professor.

Jayamanne places the originality of these directors’ creative inventions in counterpoint with, and thus in backhanded relation to, other more prevalent filmmaking practices. Pabst makes Pandora’s Box, a silent film, just at the time that silent film is being displaced by sound. And Kubrick and Ruiz make their analog movies just at the moment when celluloid film is giving way to digital technologies. Working at a time in between these two moments of change, Parajanov links his own movies to pre-cinematic aesthetic modes, like textiles and other artisanal forms.

What all these four directors have in common, Jayamanne states at the very start of her book, is that they all adopt “an oblique mode of address” that has more in common with poetry than with straightforward storytelling. In the work of these directors, she says, “the image is prior to the narrative and gives rise to it.” (p. 13) Such an approach stands in explicit opposition to the story-centric assumptions that govern mainstream narrative film, in Hollywood and elsewhere. Though Jayamanne speaks of images first of all, it is clear from the details of her discussions that what she says equally applies to sounds as well as visual images. 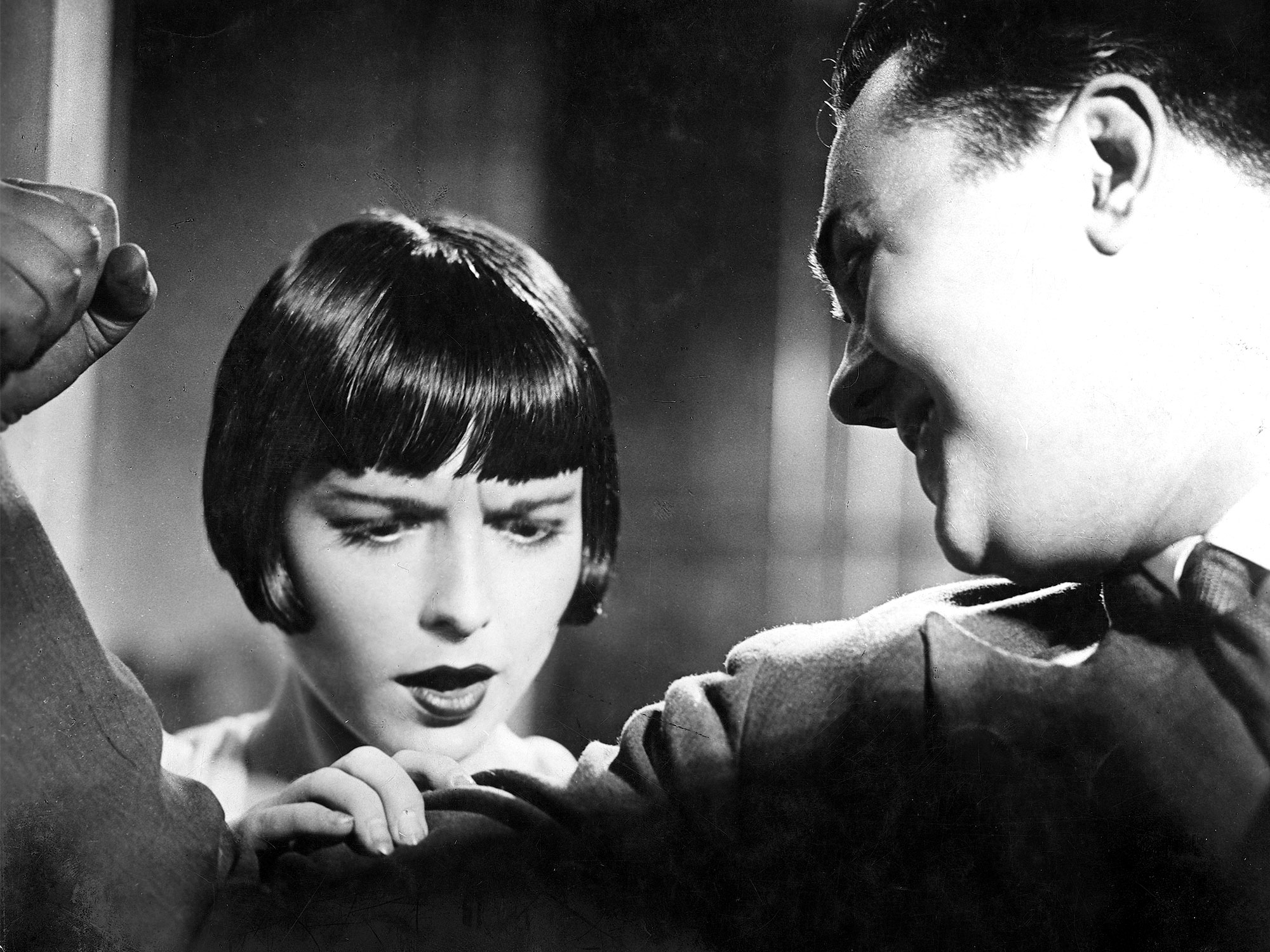 All the movies discussed in the book foreground sensorial responses to the multiple elements out of which they are constructed. They bypass our craving for determinate signification and narrative closure, providing us instead with “sensuous abstractions” that “evoke a remarkable range of sensations, feelings, and meanings.” (p. 71) Jayamanne is especially sensitive to formal elements of these movies for which “there is no narrative reason at all.” (p. 122) Such details do not ‘alienate’ us from the characters and story, so much as they draw us into another realm altogether – a realm of deeply embodied “kinaesthetic and proprioceptive” awareness, as well as of a kind of spiritual illumination. (p. 25 and passim) Jayamanne always approaches film “by focusing especially on the sensory, rhythmic aspects of the composition of images and sounds.” (p. 58)

I have already said that Poetic Cinema and the Spirit of the Gift is as much a work of theory as it is one of close analysis. Jayamanne proposes a group of concepts that have broad validity in thinking about cinema, but that are particularly exemplified in the movies she discusses. These concepts are not imposed from above, but drawn out of the practical details of the films themselves. For instance, Jayamanne is closely attentive to non-naturalistic and anti-naturalistic modes of acting. But these modes are as different from one another as they are from mainstream method acting. Also, they all have intrinsic positive content of their own; they are not simply alienating negations of our conventional expectations. Louise Brooks always thought of herself as more a dancer than an actor; Jayamanne tracks in great detail how Brooks in effect dances through Pandora’s Box.

In the case of Eyes Wide Shut, Jayamanne is less interested in Kubrick’s brand of postmodern distance, coldness, and irony, than she is in Nicole Kidman’s particular movement and speech patterns. Through the offbeat rhythms of her voice and of her body, Kidman (or rather, her character Alice) works “to trip and unravel time,” or “to bifurcate time, creating multiple micro-series, a range of micro-affects, sensations, and emotions.” (p. 119)1 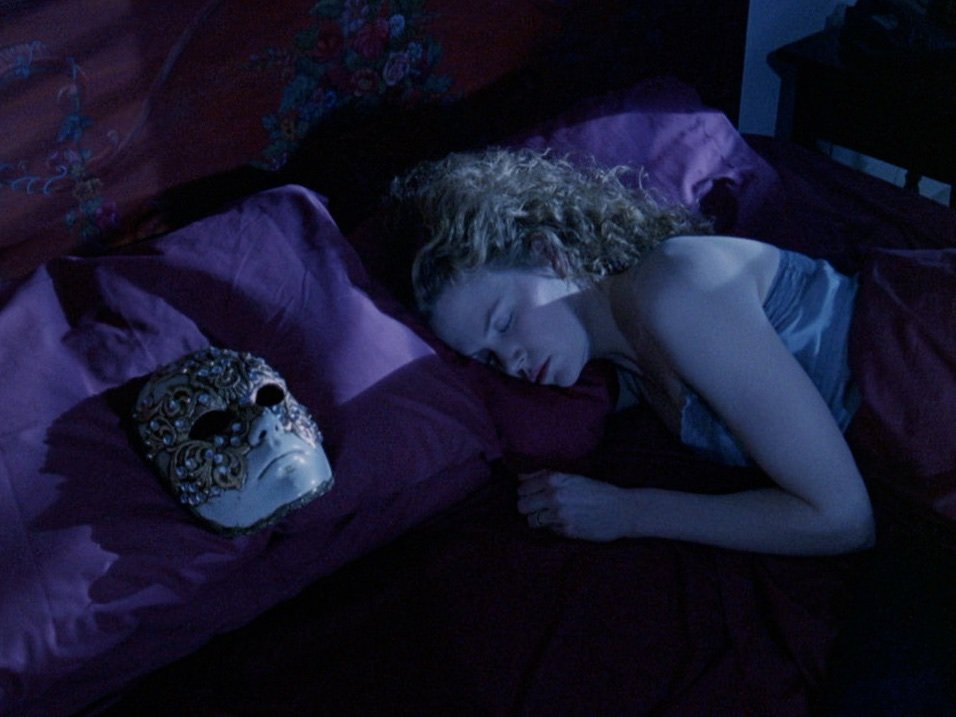 In a different but not unrelated way, the extreme mannerism of John Malkovich’s performance of Gustav Klimt in Ruiz’s movie – for instance “the generally slow speed of his speech” – work to “make the listener unwind a little in time”; this diminished rhythm itself exists in striking counterpoint to the movie’s barrage “of images that are at times dizzying in their speed, fragmentation, and allegorical complexity.” (p. 141) Malkovich’s acting style can be seen as ornamental. Jayamanne links this to the way that Ruiz’s own visual and acoustic style is heavily ornamental. This in turn becomes a theme in the content of the movie, which dramatizes, among other things, the historical dispute between Klimt’s love of ornament in art, and the modernist rejection of ornament expressed by Klimt’s contemporary, the architect Adolf Loos. 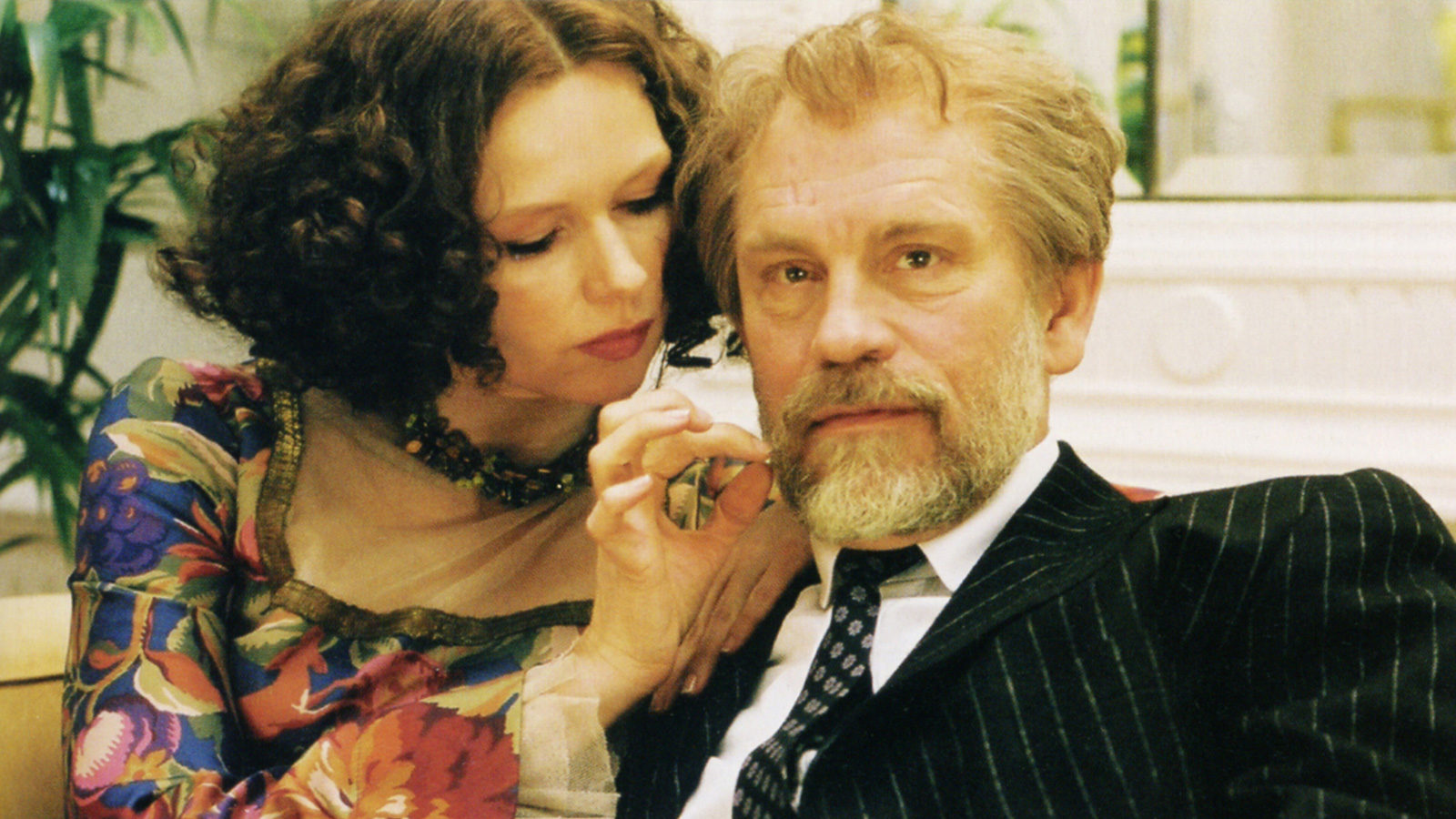 Jayamanne’s discussions of acting are only one example of how she focuses on the expressive formal details of all these films, and how they move us in unexpected directions. She is closely attentive, for instance, to the play of light and darkness in all these movies, and of color in all of them except the black-and-white Pandora’s Box. She also incorporates a wide variety of theoretical perspectives, including ones from other traditions than the European philosophical one that informs most varieties of film theory. For instance, she works with the Maori cultural complex of gifts and obligations, disentangling these ideas from some of their more egregious appropriations at the hands of 20th-century anthropologists, and deploying them instead situationally. Brook’s Lulu in Pandora’s Box seems to concertedly act in a manner that recalls the gift economy, in opposition to the capitalist economy within which this character is trapped as a prostitute. The other movies Jayamanne discusses also seem to offer their sensorial richness as gifts to the audience, in excess of the exchange-value to which art (and especially an expensive commercial art like cinema) is subjected in the capitalist world (something that does not quite apply to Parajanov, working under the equally confining but different constraints of “actually existing socialism”).

Jayamanne also invokes Henri Corbin’s ideas of the “cognitive imagination” and the “imaginal world”, derived from the thought of the 12th century Sufi thinker Suhrawardi, in order to explicate the visual articulations of Parajanov’s Ashik Kerib, whose eponymous protagonist was a Sufi wandering minstrel. Beyond this theory’s explicit usefulness in approaching Parajanov’s multicultural fable, it also helps in a broader way to think through how cinema uses the brilliance and dimness of light in order to unfold and present its vision of a world intermediate between the sensorial world on the one hand, and the discarnate intellectual world on the other. Throughout the book, Jayamanne presents such concepts situationally and non-dogmatically, but in such a manner that the reader can see broader applications in theorizing and thinking about film.

I will stop here, though I could go on. The book is wonderfully rich in its close attention to details, and in its thinking through the implications and ramifications of these details. Jayamanne’s prose is also a pleasure to read, in a way that academic discourse on film all too rarely is. Poetic Cinema and the Spirit of the Gift is indeed a gift to anyone who loves cinema, and takes movies seriously but not somberly.

Laleen Jayamanne, Poetic Cinema and the Spirit of the Gift in the Films of Pabst, Parajanov, Kubrick, and Ruiz (Amsterdam: Amsterdam University Press, 2021)