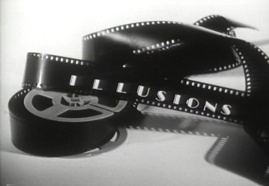 “Now I am an illusion, just like the films. They see me but they can’t recognize me.” So states the protagonist of Julie Dash’s 1982 film, Illusions. The film is a critique of Hollywood history and an attempt to subvert that very history by calling attention to the lack of an African-American presence in Hollywood during the era of World War II and even today, for that matter. 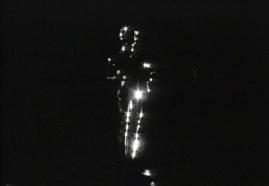 The film begins with a rotating Oscar with a voice-over that states:

“To direct an attack upon Hollywood would indeed be to confuse portrayal with action, image with reality. In the beginning was not the shadow, but the act, and the province of Hollywood is not action, but illusion.”

These illusions that Dash discusses in her short film attempt to call attention to the illusion that African-Americans were not a part of Hollywood history and seek to end the illusion, to finally make things right, by re-writing history. This illusory element is at its peak in the dubbing sequence of Illusions.

The scene begins with a pan across a sound booth that Mignon (Lonetta McKee) and her boss (Ned Bellamy) enter while two sound engineers attempt to finish the dubbing and post-synchronous sound for their Christmas holiday-season release, but there is a problem: the dubbing does not match and their star is away helping with the war effort. To fix the problem, they have hired Esther (Rosanne Katon), a young African-American girl, to replace the voice of Leila Grant, the star. We then see a musical scene from the film.

Leila Grant is the object of desire: ‘the true woman of the discourse of feminity,’ an object of the gaze and the editor’s cut. She does not have desire; she is desire. She does not have voice; she embodies it. Stranded on the Dark Continent, Esther looks at Leila and desires to be desired. (1) 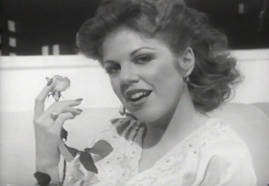 Throughout this scene, the film clips we see of Leila Grant all position her as the object of desire through several close-ups of her various body parts – her face, legs, etc. – which objectify this idealized woman of the screen.

As the group in the sound booth watches the debacle, on the back wall we can see a Mae West poster. This image is important on many levels. First, West seems to be the real world counterpart to the Leila Grant character. Both are white, beautiful, blonde screen queens who are objectified by the male gaze. On the other hand, this poster of Mae West can be seen as doing something different. In her heyday, West was famous for her on screen bawdy double entendres, her most famous being the quip: “Is that a gun in your pocket, or are you just happy to see me?” 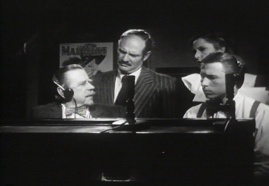 During the 1930s, when the Production Code was taking over the morality of Hollywood, West, who co-wrote many of the screenplays for which she was to star, was forced to edit out the “racy” content. It seems that Dash is making a statement with the West poster on the wall for the fact that not only were African-American women subjected to the white patriarchal Hollywood system, but white women were as well. If they were seen to be strong, independent, sexual beings, they were forced by either the studio heads or the Production Code to tone down their acts, in essence erasing many of their dreams and talents from history and forcing them to be mere illusions of what they desired to be.

Like West, Esther, the young African-American girl who is selected to replace the voice of Leila Grant, is also a mere illusion, forced into non-existence by the studio system.

Like the seamless continuity style that conceals its work (e.g., editing, processing, discontinuity), Hollywood cinema has concealed or erased and prohibited the work of people of color, on and off screen. (2)

Esther begins to sing and, at this point, Dash has done something very interesting with the composition of the frame. In the upper-left-hand corner, Esther is singing; in the upper-right-hand corner is a screen with the Leila Grant film playing; and in the bottom part of the frame is a doubled image of one of the sound engineers watching this take place. Esther’s voice literally “looming in dark space asserts the power of cinema to produce images and illusions” (3). 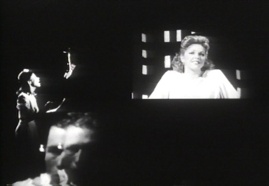 Dash’s Illusions calls attention to the ways in which the Hollywood studio system created the illusions that forced African-American women to the wayside of film history only to be forgotten. In her films, Dash makes these illusions visible by critiquing that very system and showing how the Leila Grants of the world in effect were not the real star of the picture, but the Esthers who had the real talent à la Singin’ in the Rain (Stanley Donen and Gene Kelly, 1952).

Yet, Illusions’ own operation remains transparent. Ironically, in the projection scene, the diegetic and extradiegetic levels collapse; all the female voices in this sequence are post-dubbed. Both Ester and Leila lip-sync Ella Fitzgerald. The narrative’s focus on synchronization- the corporealization of the female voice- shifts attention away from the film’s orchestration of image and sound so that Leila’s voice, in fact, is no more or less true than Esther’s. (4)

According to Mellencamp, “Dash reverses the blond standard of the star system that defined conventions of female beauty within a regimented, standardized uniformity.” (5) 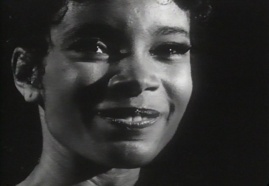 To put it briefly, Dash’s film, namely the dubbing sequence, attempts to subvert the history of Hollywood that all but disintegrated the presence of African-American women. She revises this

by synching their off-screen voices to onscreen white women. Women of color were heard, but not recognized. When women of color were on the soundtrack or passing on screen, they were not remembered or recognized. Illusions inscribes the point of view missing from U.S. film history: African-American women (both onscreen and in the audience) granting visibility and audibility by synching image to off-screen voice. Illusions also charges Hollywood, which did not make films about people of color even during World War II, and the nation with hypocrisy and racism. (6)

Illusions calls attention to this travesty and tries to rewrite history and reclaim what was lost: “Illusions explores questions of race, representation, and gender in Hollywood cinema-in particular, the absence of ‘meaningful’ and ‘realistic’ images of our lives.” (7)