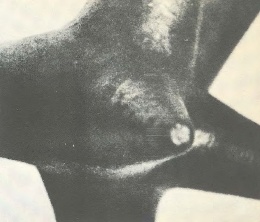 Visual Variations on Noguchi is a riveting visual study of the dynamic relationship between film movement and sculptural form. Marie Menken made the film while looking after Isamu Noguchi’s MacDougal Alley studio in 1945. It is both Menken’s first film (1), and the first within in a series of her films that study the work of prominent modern artists including Piet Mondrian, Dwight Ripley and Andy Warhol. Produced at a particularly rich moment of innovation within the avant-garde, the film can be read as an important intermediary between visual art and cinema in post-war North America. As such, it is an indispensable film for contemporary viewers of cinema and modern art alike.

The foundational role Visual Variations on Noguchi played in the emergence of the New American Cinema cannot be overstated. Menken inspired an entire generation of experimental filmmakers including Stan Brakhage, Norman McLaren, Jonas Mekas and Kenneth Anger. Menken was notably the first to employ a rhythmic and “free swinging” hand-held camera, which liberated other experimental filmmakers from their fraught relationship with the traditional Hollywood dolly or tracking shot (2). Menken’s rhythmic editing style was also a significant influence on the lyrical film and the pursuit of a film poetics by filmmakers such as Brakhage (3).

Alongside its influential position within experimental film history, Visual Variations on Noguchi also exemplifies the growing ambivalence many post-war visual artists felt towards the limiting boundaries of the canvas and its static frame. Before making the film, Menken worked primarily as a painter and collage artist. She brought key elements from her visual art practice to her filmmaking, addressing them from a specifically cinematic point-of-view. Menken’s preoccupation with the relationship between film and visual art situates her formal approach alongside the work of Allan Kaprow, Carolee Schneemann, Yoko Ono and other Fluxus artists interested in breaking away from the limiting constraints of the canvas. This is an aspect of her entire oeuvre, and of Visual Variations on Noguchi in particular, that is little discussed, but vital nonetheless (4). Through these explorations, Menken encouraged the use of film as a viable medium within visual arts practice while simultaneously expanding the ways in which filmmakers conceived of interacting with the film camera, thus bridging an important gap between the two mediums. While a similar interplay is found in the work of a range of visual artists/filmmakers in the 1950s and 1960s including Schneemann, Joyce Wieland, Paul Sharits, Michael Snow and Gunvor Nelson, Menken’s groundbreaking explorations in Visual Variations on Noguchi pre-date the films of these other artists (and can be seen as a forerunner in this general area of avant-garde art as well).

Many elements of the formal style of Visual Variations on Noguchi can be found in Menken’s subsequent films. Its tone is playful and unpretentious. Each frame is focused on capturing and interrogating the sole object of the camera’s gaze – Noguchi’s sculptural collection. The film stands as a meditation on the act of looking, particularly at art objects. It searches, peers into and explores the properties of the sculptures with a restless and exacting momentum, seeking its bearings within a visual field of abstract forms. It also performs, at other times, a careful, slow and intimate gaze that seeks a balance between camera and sculpture, foreground and background, object and subjective vision. Panning and tilting across a variety of shapes and forms, the camera often pauses and contemplates a sculptural fragment before surrendering to a spontaneous free fall down the fuller figure. Throughout the film the camera twists and manipulates perspectives and angles at a dynamic pace. This continual movement reveals Menken’s interest in the apparatus of the camera itself. This formal emphasis on camera movement highlights the camera’s mechanical specificity, examining how film causes us see objects differently. Visual Variations on Noguchi can be read as a visual treatise – alongside other avant-garde film manifestos – that asserts the specificity of film as a medium (5).

The unflinching and continuous movement of the camera’s gaze also makes evident Menken’s presence as a filmmaker who, with the camera, performs the act of filming (6). This somewhat indirect index of her presence points towards the performativity inherent in the “gestures” of the camera (7). Menken seems to be interrogating such filmic gestures as she enacts them – providing a refreshingly reflexive to the relationship between the filmmaker and the apparatus.

Through these reflexive aspects, Menken’s camera examines Noguchi’s sculptures in a way which challenges standard visual responses to sculpture. In the film, we never see Noguchi’s complete sculptures, a perspective we would encounter as observers in a gallery or as viewers of more traditional photographic and filmic forms/documents. The camera searches the object at close range. This proximity and the movement associated with it change the conditions of viewing. This reframing of Noguchi’s sculptures through the gaze of the camera creates them anew, transforming them from concrete three-dimensional forms to moving fragments on screen. This method of framing imbues the sculptures with new meanings. Entirely new object-viewer relations are produced by Menken’s purposefully erratic sweeps of the sculptures, relations that reveal “the flying spirit of movement” within the sculptures themselves (8). This method of documenting and “revealing” the sculpture is reminiscent of Russian Formalist interest in “making strange” that which we habitually take for granted (9). Menken’s framing and editing unsettle the habitual way in which viewers encounter such traditional objects of fine art such as sculpture. The discordant strains of the film’s score further emphasise this through the tension they produce between image and sound. Through the relation of its audio and visual elements, Visual Variations on Noguchi reveals another key link between an earlier avant-garde movement and the struggles and experimentations of the post-war avant-garde.

Ultimately, Visual Variations on Noguchi stands as an influential film during a key moment of change within the avant-garde. It is a pivotal film that gestures back to the avant-garde principles of the 1920s, while simultaneously exploring the boundaries between film and visual art, a field that would explode into an aesthetic revolution in the following decades. The film’s aesthetic concerns both pre-empt the shift from modernism to inter-medial and performance art in the 1960s, and the formal innovations of the experimental film movement that emerged at the same time.