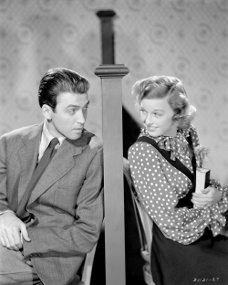 Initially, the ambience in which you find yourself comes across as alien if not antithetical to the glossy sheen one associates with Lubitsch’s typically upscale environments. The savoir faire that his protagonists take as second nature seems smothered by the inhibitions that generate the social intercourse of the clerks and bicycle deliver y boys that inhabit this commercial establishment. It is their customers and not their co-workers who populate the nonchalant climate in which, as Raymond Durgnat reminds us,

the summum bonum of human life lies, after all, in possessing the advantages which figure so largely in the hedonism of l’homme moyen sensual: high spirits, personal attractiveness, wealth, poise and humour, a kindly insolence, the generosity of heart needed to appreciate most people, flirt with many, and love not a few. (1)

The easy banter and bon mots that Lubitsch’s characters issue – as if unconsciously – clash with the class-driven prohibitions of a setting where one’s social superiors set the agenda. Somehow that kind of behavioural opulence would seem out of place here, as though the characters were acting above their station and thereby be thought of by their customers as putting on airs.

That suggestion of the strictures of class and the claustrophobia of custom brings a novel and innovative tone to Lubitsch’s work, as if he had temporarily taken a leave of absence from his glossy universe and checked in at the circumscribed cosmos that his audiences at the time inhabited, only slowly emerging from the long-term constrictions of the Great Depression. Lubitsch recognised that the commercial failure of his last production for Paramount, Angel (1937), came about in part because of the public’s decreased tolerance for the high jinks of the highborn. Circumstances led them to reject the rarefied atmosphere that Lubitsch’s films had epitomised for more than a decade, as though the comparatively clumsy efforts at self-improvement of Capra’s working class protagonists resonated with their own attempts to keep one step ahead of the breadline. The circumscribed expectations of Klara (Margaret Sullavan) and Alfred (James Stewart) must have seemed, instead, almost uncomfortably familiar. Lubitsch made sure that both the setting and the costuming did not clash with the kind of limited expectations that the couple would consider nothing out of the ordinary. He told an interviewer, “No one used to care how characters made their living – if the picture was amusing. Now they do care. They want their stories tied up to life. People nowadays have to make their living.” (2) Even when Sullavan brought her character’s humble overcoat off the rack for a pittance, Lubitsch thought it still gave the impression she might be living above her station: “Too smart for a clerk looking for a job” (3). He had the frock altered so as to appear ill-fitting and then left out in the sun to fade.

This kind of naturalism clashes with the opulence of Lubitsch’s earlier work, even if we do well to remind ourselves that one of the groundbreaking characteristics of his German pictures, particularly the costume narratives laid in an earlier age, is that he reminded us of how even the aristocracy could be, behaviourally, as common as dirt: the courts of Louis XV or Henry VIII only seem housed in a kind of cloistered empyrean. The Shop Around The Corner takes even a more drastic step further in eradicating the gap that had emerged between the director’s characters and his audience by focusing on the anxieties and emotional upheaval of the working class. He also made another intriguing transformation of his familiar format. Whereas earlier Lubitsch treated individual idiosyncrasy as the narrative fulcrum of his scenarios, he now tackled life lived within a community. As William Paul observes, “No previous Lubitsch film is so thoroughly interested in the dynamic of a group: where society in the past might have functioned as a restriction on individual desire, this is the first film to posit personality itself as a function of society” (4). Accordingly, the tone can seem by contrast almost sombre, as though Lubitsch has polished away the sheen of self-satisfaction that emanates from his previous protagonists almost as though he were engaged in an act of penance for his fall from commercial grace. Ironically, at the same time, he accomplished this transformation at MGM, where however much Louis B. Mayer imagined that the Hardy family epitomised the average man, the universe the mogul reigned over was far from the everyday. Lubitsch never allows us to put out of mind that even if Klara and Alfred eventually achieve harmony, their horizon of expectations will never exceed the constraints that house Mr. Matuschek’s (Frank Morgan) constellation of clerks.

And yet, one should not obscure the warmth and abundance of behavioural felicities in The Shop Around The Corner by alluding to the grimness that coexists with the grandeur. For many – Pauline Kael and David Thomson amongst them – it remains one of Lubitsch’s best films as it incorporates, in the latter’s words, “a treasury of hopes and anxieties based in the desperate faces of Stewart and Sullavan” (5). It also inspired an unaccountably overlooked, and all too infrequently revived, 1963 Broadway musical, She Loves Me, by the composers of the more familiar Fiddler On The Roof: Jerry Bock and Sheldon Harnick. They captured its bittersweet combination of emotion nearly thwarted by circumstance pursued amidst the equally imposing impediments of life as a wage earner. Had he lived to hear the score, Lubitsch might well have felt impelled not only to remake his own work but also produce one final musical.