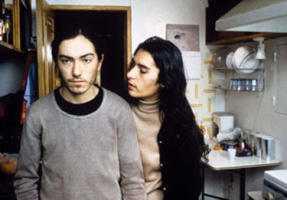 Ossos/Bones is Pedro Costa’s third feature film and signals the further shift of his work into the lives of migrant communities. After shooting Casa de Lava/Down to Earth (1995) in Cape Verde, where he used members of migrant communities as characters for the first time, and non-professional actors share the screen with the protagonist (Inês de Medeiros), Costa set his crew in the unchartered territory of the Fontainhas’ slum. Arriving there with messages from friends and relatives back in Cape Verde, Costa finds the residents as powerful and as neglected as those who had contributed to his previous film in the Cape: “These people have already been fooled by everything, by the land, by the ghosts, by the Portuguese. They can’t be fooled by cinema. I tried to respect the truth….” (1)

Bones is both documentary and fiction, integrating the residents of the slum, their daily lives and environment, into a carefully rehearsed script. This script has a minimal plot – a child is born, the young parents don’t know how to cope, an older woman that cleans houses in the city tries to do something about it. When the film was exhibited at the 1997 Venice Film Festival, Jean-Michel Frodon remarked that Bones had the plot of a melodrama but that nothing in the director’s approach to the form worked within the expectations of the genre. He argued that since Bones is the same as its characters, who have almost nothing, it contains almost no light, no colour, no dialogue, no narrative (2).

This doesn’t mean that the film is aiming for a kind of documentary “look” as an immediate tip to the “authenticity” of its setting. From the very beginning of his career, Costa has always been extremely and intensely precise in terms of picture composition, lighting and editing. In Bones there are beautiful, tender close-ups of the characters, similar to the ones at the beginning of Casa de Lava, where an expressionless face accumulates all meaning; carefully designed lighting that confers a painterly feeling to simple everyday objects; a specific rhythm of editing that extends shots a moment after characters leave the frame. The tracking shot at the beginning of the film, accompanying a young man walking down a sidewalk and holding a black plastic bag, is paradigmatic of Costa’s work. There is no clue to who he is or what he carries. He goes on walking, with the bag almost dragging along the ground at times, the sound of cars going by. He doesn’t look at the bag. In fact, he seems to be in a hurry. But suddenly he lifts the bag and holds it to his chest, a bit awkwardly. And then, while he is still walking, the bag moves for there is something living inside – a baby. The denial of context for these actions only makes them more poignant.

There have been many affiliations singled out in relation to Costa’s work, by himself and by those who view his films. At the top of the list there is Robert Bresson, Jacques Tourneur, Yasujiro Ozu, Kenji Mizoguchi, Michelangelo Antonioni. But Costa’s maturation as a director also has a link to earlier Portuguese cinema. Bones seems to be born out of the efforts of Paulo Rocha in Mudar de Vida (1966) (3) or António Reis and Margarida Cordeiro’s Trás-os-Montes (1976) and Ana (1982).

Mudar de Vida is set in a fishing village, Furadouro, and the resident fishermen portray many of the characters. Interviewed by Costa in 2001, Rocha stated that for this film he made up a story just so he could show the lives of these people, since he disliked the idea of documentary, particularly the careful and somewhat anaesthetised forms that were then being produced (4). On the other hand, Reis and Cordeiro immersed themselves in the Portuguese northern region of Trás-os-Montes to create both of the films mentioned above, using non-professional actors and partaking of these people’s lives. In this discussion of the links between Costa’s work and earlier Portuguese cinema it should be dully noted that Reis was co-writer of Mudar de Vida with Rocha. He was also assistant director to Manoel de Oliveira on Acto de Primavera/Rite of Spring (1963), another film that was built around a local community. Furthermore, Reis was a teacher at the Lisbon School of Cinema when Costa attended his classes there, and has had a standing influence with his students.

Although their work is very different, and each has a definite personal style, these directors share with Costa the idea that documentary and fiction are not mutually exclusive. In fact, they share the understanding that as directors they can gather the living force of a community into a collective effort of cinema, into an exchange of trust and work. The film, or cinema, enters these people’s lives and they enter the film in equal measures.

Bones is therefore a point of no return in Costa’s work. For one, it’s the last of his films, so far, to have been shot on film with a conventional crew (and it doesn’t seem likely he will return to this method of work). Secondly, it has to be stressed that it is not an end in itself. It signals the defining moment of Costa’s work ethic and is the starting point of a film trilogy that includes No Quarto da Vanda/In Vanda’s Room (2000) and Juventude em Marcha/Colossal Youth (2006). Emblematically, at the end of Bones’ shooting, Vanda Duarte, one of the Fontainhas residents and a lead character in the film, challenged Costa: “Cinema can’t just be this. It can be less tiring, more natural. If you just film me. Shall we go on?” (5)