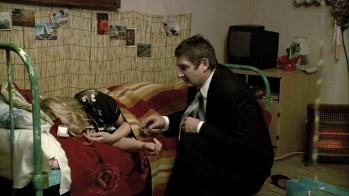 These four nights with Anna have variously been described as “an off beat love story”, “a deeply gothic tale”, “hints [of] really being far, far from what it seems”, and Skolimowski (Deep End, Moonlighting) “back in the game”. This is almost all that should be revealed in advance so that a viewer can be left wondering where this story of a strange obsession in a nameless Eastern European village might lead. Concerns with voyeurism and the transfer of guilt that Skolimowski here has in common with Hitchcock are embedded in an austerely ambiguous narrative with surrealist affinities in which the sense of lives connected by pain and desire is punctuated with dark humour and even moments of slapstick. Skolimowski is indeed “back in the game”.

I wrote the above for the catalogue of the 2009 Brisbane International Film Festival. In essence, I am in agreement with David Bordwell’s warning that reading any kind of a synopsis of this film “not only spoils the experience but fundamentally changes it”. He continues, “instead of laying out the premises explicitly, the film’s narration supplies them in tantalizing, equivocal doses” following “the great tradition of distributed exposition, so that we get the context only after seeing something that can cut both ways” (1).

So be warned: what follows is a spoiler.

Four Nights with Anna opens with indications of possible murder beginning a guessing game that transmutes into a droll story of unrequited l’amour fou.

Leon Okrasa (Artur Steranko), a loner who lives with his ailing grandmother, works in the crematorium at the local hospital and spies on a nurse living in quarters across the way.

Leon’s obsession is played out in four nights “spent” with Anna (Kinga Preis), punctuated by six flashbacks uncovering a back-story. It is revealed that he had previously served time for raping Anna, a charge he continues to deny. He is finally again arrested, found guilty of breaking into Anna’s place and (it seems) sentenced.

After what seems to be an indeterminate lapse of time since Anna’s visit, Leon appears to be leaving the prison. He places a plastic bag (of his possessions?) in a rubbish bin, enters the barn from which he had spied on Anna, climbs through the window he had installed for the purpose, and sets off across the field towards what should be Anna’s quarters. He comes to a halt facing a wall as if disoriented, his back to the camera, in what is now the space where he had spent his four nights with her.

Four Nights with Anna belongs with that “half” of Skolimowski’s oeuvre of nine-and-a-half features – six quasi-autobiographical, defiantly original works (Rysopis/Identification Marks: None [1964], Walkover [1965], Bariera/Barrier [1966], Rece do góry/Hands Up! [1967/1981], Moonlighting [1982] and Success is the Best Revenge [1984]), a segment in a Czech feature, Dialóg 20-40-60 (1968), and two other features, Le départ (1967) and Deep End (1970) – based on his original screenplays. The other six, mostly co-productions with sizable budgets and international casts, are all literary adaptations (from Conan Doyle, Nabokov, Robert Graves, Lenz, Turgenev and Gombrowicz) to which he applied a range of strategies while leaving a distinctive signature on each, most successfully in The Shout (1978). He is dismissive of most them, seeing The Adventures of Gerard (1970), King, Queen, Knave (1972) and Ferdydurke/30 Door Key (1992) as mistakes (3).

In the past Skolimowski has said that the only way he knows how to make films is “to please himself”. Four Nights with Anna was made exactly as he wanted (“I’m responsible for every frame”) and satisfies him “quite a lot” (4).

David Bordwell reports that during a “Q and A” following the screening at the Palm Springs International Film Festival Skolimowski remarked that he liked “to play with a little ambiguity… to leave it to the audience to interpret” while keeping the locale indefinite, the time period vague, and allowing the mysterious final shot to provide “a third ambiguity” (5).

One of the pleasures in viewing Four Nights with Anna is the assurance with which Skolimowski gradually, although not fully, reveals his hand through his preferred form of layered, elliptical narrative. As a study in sexual obsession separated by nearly four decades from its companion piece, Deep End, Four Nights with Anna joins the ranks of a distinguished late sexagenarian and septuagenarian cinema – Seven Women (John Ford, 1966), Le Caporal epinglé/The Vanishing Corporal (Jean Renoir, 1962), Gertrud (Carl Dreyer, 1964), El Dorado (Howard Hawks, 1967) and The Big Red One (Samuel Fuller, 1980) immediately come to mind – films of summation and refinement in which, as Andrew Sarris put it in his defence of Seven Women against the charge that Ford was past it, “an economy of means yields a profusion of effects” (6). Or, as Skolimowski himself announced at Cannes: “To those who like me – I’m back […]. And to those who don’t like me – I’m back.” (7)