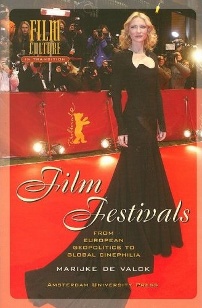 In Film Festivals: From European Geopolitics to Global Cinephilia, Marijke de Valck takes a cultural theory and media studies approach to a subject that most cinephiles experience at a more visceral level. This academic point of view is unique, particularly de Valck’s use of Actor-Network Theory (ANT) to situate the film festival as a central node within a global network of numerous living and non-living actors in the film system. ANT enables us to think of the film festival as an agent that is part of a network, which both counters and complements Hollywood’s hegemony. According to de Valck, in opposition to the vertical integration of the studio model, film festivals offer an alternative platform for marketing and negotiating. At the same time, they borrow Hollywood’s red-carpet glamour and stars to grace their openings. Even the origins of the Cannes film festival involved the support of the Americans who banded with the British and French to reject the fascist bias of the judges at the Venice film festival in 1938 and to form a counter festival that was truly international (i.e. not influenced by the propaganda of a dictator).

De Valck explains that combining ANT with the anthropological idea of the rites of passage helps explain why film festivals can not only be self-sustainable but also proliferate worldwide. Modifying the notion of the symbolic rite of passage for a human subject to fit the film festival’s spatiality, she regards the film festival as a “site of passage” (p. 36) where films receive premiere screenings and the careers of filmmakers are launched. Thus film festivals become a site for possible cultural legitimisation: a film that picks up an award might go on to win other awards on the festival circuit. Simultaneously, “site of passage” refers not just to the centrality of location but also to time. An American indie filmmaker might consider timing his film’s premiere and coordinating it to fit with other festivals on the circuit, with an eye possibly to the Oscars ceremony. Sometimes filmmakers select a festival either for its cultural and media value or timing. More than that, ANT also attributes importance to other non-living (f)actors like the city hosting the festival. In such cases, the city may be a major sponsor of the festival, which is regarded as an income-generating event during the low tourist season, i.e. Berlin or Rotterdam. De Valck incorporates theories of the globalised city to discuss the choice locations of a few of the A-list European film festivals and to show the interconnectedness of the city and the festival by observing that the festival becomes an opportunity to sell the city and not vice versa.

De Valck claims that the festival network has three strategies that ensure its survival and proliferation: substituting commercial distribution with subsidised festival exposure; translating culture into value through competition and awards; and finally, the recent turn to industrial tasks such as offering training workshops for young filmmakers from all over the world (e.g. the Berlinale Talent Campus) and providing funding to filmmakers and scripts from the developing world (e.g. the Hubert Bals Fund from the International Film Festival of Rotterdam). Using an example from Malaysia, I would agree with her on this point. Independent filmmaker Tan Chui Mui’s first feature Love Conquers All (2006) won the Tiger Award at the International Film Festival of Rotterdam, followed by two other awards in Pusan in 2007 – the New Currents Award and the Fipresci Award. This generated news in the local media and her DVD was even distributed by Virgin Record stores in Malaysia (which is an accomplishment for non-mainstream and non-commercial independent Malaysian films). Tan invested her award money into fellow indie filmmaker Liew Seng Tat’s film on the condition that if he won a prize, he would help fund her next film. Liew’s first feature Flower in the Pocket (2007) went on to win six festival awards outside of Malaysia including the Tiger Award at Rotterdam (2008), Pesaro, Fribourg, Deauxville, and the New Currents and KNN Audience awards at Pusan the following year. The film’s awards at prestigious festivals may have given it enough cultural legitimacy to warrant receiving more awards at subsequent festivals in the circuit. Finally, when the filmmaker returned to Malaysia, the film aroused curiosity and nationalist pride from Malaysians, who attended local screenings. Like Tan, Liew went on to do a residency in Paris as part of the Cannes Cinefondation Residence in October 2008. Evidently, this festival network is circuitous and has a global outreach.

Overall, the book reveals a comprehensive analysis of the inner workings of film festivals and how they relate to other actors on the global circuit, with differentiated programming from festival to festival, networking with policymakers, audiences, stars, buyers, city personnel and tiers of accreditation for media, to mention a few. Four case studies of festivals are offered as sites to focus on specific topics in each chapter: the geopolitical agendas that went into the historical process of configuring the Berlin film festival; Cannes, the festival as marketplace; Venice as media event, and lastly, the festival programming and cinephile audiences of Rotterdam.

The historical overview of the origins of the film festival in Europe is interesting for the neophyte but may not yield any new insights for experienced film critics, historians, programmers and avid festival-goers familiar with trends over the past decades. De Valck divides the development of film festivals into three phases. The first begins with the establishment of Venice in 1932 until 1968 when Jean-Luc Godard and workers on strike shut down the Cannes film festival and festivals were reorganised with more radical, political programming along themes à la Pesaro, as opposed to showcasing national cinemas. The second phase saw independent festivals as both “protectors of cinematic art and facilitators of the film industries” (p. 19) as a world cinema market was created. But by the 1980s, film festivals entered a third phase whereby they became more institutionalised, with each festival depending on another festival as the whole industry boomed worldwide. The impact of video, the porn industry and the arrival of new independents such as Miramax contributed to this boom.

The chapter on Rotterdam is the most interesting for its focus on the man behind the Hubert Bals Fund, which supports upcoming filmmakers from developing countries who have difficulty getting funding from their own governments. What will happen to such funding and to film festivals as the global economic recession starts to affect attendance and tourism numbers? One can’t help but think about how film festival budgets and, concurrently, budding filmmakers from all over the world will be impacted. Will funding dry up in a protectionist climate, or will governments continue to fund such activities, in the name of universal humanism, or cultural and economic preservation? How will film sales do at the various film markets that have become part and parcel of the festival circuit or network?

Towards the end of the book, de Valck suggests that, by providing an artificial life support system for independent films and films that would not otherwise be screened or distributed, film festivals may not be creating a healthy habit. This ambivalence stems from her opinion that film festivals have not successfully created financially independent industries for such films and may even be prohibiting initiatives for economic independence. However, although this may adequately describe the predicament of state-supported European film festivals, it may be too broad a statement to apply to all film festivals: for example, the eclectic mix mentioned in Kenneth Turan’s book Sundance to Sarajevo: Film Festivals and the World They Made (1).

Looking through the vast footnotes, de Valck’s ability to tap into a wealth of Dutch-language resources is deeply appreciated for an Anglophone reader. On a minor note, I would like to point out numerous annoying typographical mistakes scattered throughout the book and the repetitiveness of certain points. More importantly, there seems to be a lack of personal interviews at the film festivals that constitute a key ingredient of “ethnomethodology” (p. 22; p. 218 n15). The book’s analysis is heavily based on other written texts and the published work of others who have conducted interviews, statistical analyses, surveys, etc. One of the limitations of relying too much on Actor-Network Theory is that the emphasis on the economic and cultural role of the film festival as a social actor comes at the cost of sacrificing an overlooked human actor in this network: the film festival-goer. The section on cinephilia, where one hopes to meets these cinephiles in person, is also disappointing because it relies on historical texts and text-based sources rather than giving us a sense of the author’s presence and mingling with filmgoers at the festival. ANT takes precedence over this kind of anthropological proximity to its human subjects and rather than asking what power inequalities are at work within the network (a cited limitation of ANT), perhaps the question worth asking is how to bring the human actor back into ANT? One can’t help but compare – and perhaps unfairly – the dry earnestness of this book against Turan’s ability to capture the excitement and buzz of what it means to be at a film festival.