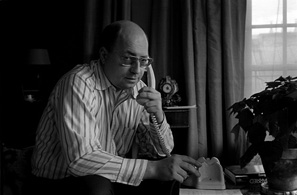 I met Pierre Rissient on what I think was his first visit to Australia. He had brought out his first feature film One Night Stand (1977) for a screening at the Sydney Film Festival and had then headed down to Canberra where he wanted to see Clarence G. Badger’s Rangle River (1936) and That Certain Something (1941). Badger was the American director who had directed Gloria Swanson and Will Rogers. He became a specialist in romantic comedies in the silent era and had a triumph when he made Clara Bow a star in It (1927), a film that gave birth to a term. However, Badger’s career sank slowly in the sound era. Between 1933 and 1939, he didn’t work as a director and then came to Australia to make two films before retiring. My digression is only there to show Pierre’s dedication to seeing everything that interests him by whatever means is available.

I recall going to a screening with Pierre of Billy Wilder’s A Foreign Affair (1948), a wonderful and largely neglected post-war comedy set in a bombed-out Berlin. We saw it at the McMahon, one of his favourite Parisian cinemas, and a place which features very prominently in Todd McCarthy’s Man of Cinema: Pierre Rissient (2007). After the screening, we talked enthusiastically about many elements of the film, but especially the music by Friedrich Hollaender, a composer whose work in film commenced with Der Blaue Engel (The Blue Angel, Josef von Sternberg, 1930). Hollander then wrote the music for a dozen or more masterpieces in both Germany and later in Hollywood.

A couple of weeks later, we met up again in London and Pierre mentioned that the next day he had arranged to go the BFI Archive to see Ich und die Kaiserin (1933), a film, in fact the only film, Hollaender directed. The invitation to attend was snapped up. Dedication and a search for completeness are hallmarks of Pierre’s work and life.

Pierre has done this for a half century or so in a business that has attracts people who sense an opportunity to make money fast, without conscience and without a thought for any encouragement of the art of the film. Such people have been chronicled, dissected, lampooned and pilloried in both literature and the cinema for close to a century. Writers as reputable as F. Scott Fitzgerald, Norman Mailer and Christopher Isherwood have written books and directors as highly regarded as Nicholas Ray and Vincente Minnelli have made films about their experiences dealing with the oafs and philistines the industry attracts. But until the fairly recent films and books about real cinéphiles such as Henri Langlois and Pierre have been non-existent. Until McCarthy’s film, no one has thought to make a movie or write a book about any of those key figures who have dedicated their lives to ensuring that the best filmmakers are working and that their films get screened to discriminating audiences around the world.

This is essentially what Pierre Rissient’s life has been about. Filmmakers from major Hollywood figures to small-scale directors in backwater Asian nations have benefited from Pierre’s contact, support, encouragement and occasionally ferocious advocacy. He is one of those whom the French call an “animateur” – a life force dedicated to improving and cajoling the best out of what can otherwise be a resting place for sleaze and compromise.

This is where much of the fun in McCarthy’s film takes place. The film industry being what it is, it is also open for people to easily if slyly create excitement, to ramp up interest or to generate enthusiasm. Pierre has played those games as well as anybody. When you send an invitation to 1200 people to see a film and then book a 60-seat cinema for the screening, you inevitably have a riot on your hands. (1) When you position a film as a midnight special at the festival’s biggest cinema, when no other film is showing, you also attract every body who has finished their dinner and has nothing else to do. (2)

Pierre was in fact a master of developing ways of gaining interest. Along with Bertrand Tavernier, he set up their film distribution and publicity business. He invented the method of gaining free newspaper and media coverage by privileging the director. It brought to prominence, especially, the previously anonymous American directors Joseph Losey and John Berry, who specialized in the darkest corners of noir. He brought them to France for the openings of their films and laid bare their careers with retrospectives at the great institutions of cinéphilia. There, they would be interviewed by august newspapers like Le Monde and be given a sense of gravitas, indeed self-importance, never before achieved. Pierre redefined cinema publicity and, in particular, gave a great deal of impetus to the newly emerging notions of the cinéma d’auteur that the French critics, especially the monthly magazines Cahiers du Cinéma and Positif, explored in great depth.

Todd McCarthy’s film shows a man that many of us love. He can be opinionated, irascible and very wily. But he makes and holds a lot of friends. Not everyone remembers him fondly and there a few waiters around the world who probably cringe when they see him enter their establishment. McCarthy’s film gets all this pretty right. But it does cop out in one respect by blipping out the name, mentioned by David Stratton, of the very famous actress with whom it’s been alleged, and not denied by Pierre, that he shared a one-night stand. Lovers of the films made by Howard Hawks, Don Siegel, Samuel Fuller, Roger Vadim and Brian De Palma among others in which the actress appeared will only be in awe that it happened … if it happened.