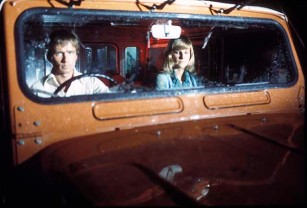 At the centre of Colin Eggleston’s Long Weekend (1979) is a clever and original idea. Executing that idea was a bold gamble and, if it only falteringly comes off, it is, at times, an arresting attempt.

Based on an original screenplay by Everett de Roche (who also wrote Patrick [Richard Franklin, 1978] and Snapshot [Simon Wincer, 1979]), the film concerns two middle-class Australians who try to get back to nature over a long weekend. But what is intended as a peaceful camping trip to a hideaway beach becomes a horrifying confrontation between man and nature.

Peter (John Hargreaves) is an executive in his early thirties with a basically childish outlook on life. He sees actions as part of a game, and plays them accordingly. To him, braving the wild is taking along $2000 worth of camping equipment, all newly bought. One wonders, in fact, whether he would have ever used it again – had he, of course, survived. “Use” is the operative word because Peter exploits things for the immediate enjoyment they give him. And if anyone, be it his wife or a parking-officer, gets in his way, he petulantly shrugs them off.

Together, Peter and Marcia are ugly caricatures of known Australian types: trendy, inconsiderate and cruel, and unhindered by any sense of value or purpose in life. They are totally unlikable, nasty people who gain a sense of achieve­ment through the destruction of others.

This characteristic, incidentally, is the one Hargreaves and Behets convey most convincingly. Though on the whole miscast, they do generate in their more vocal moments a highly unpleasant but unavoidable reality.

In their best scene together, their characters tear each other to shreds while driving along the beach. The dialogue is particularly forceful (“You self-indulgent maggot”, etc.) and though the scene ultimately fizzles out, hampered by some heavy references to Marcia’s abortion, it is well-acted and nicely paced.

The issue of Marcia’s abortion does, in fact, turn out to be one of the film’s most insistent themes. It is also one Eggleston largely over-states with explicit imagery (an eagle’s egg smashing against a tree to reveal a blood-coloured yolk), and crude verbalization (“Is reality screwing the neighbours and murdering the unborn?”).

It is hard to understand this insistence on Marcia’s abortion. In a curious way it even takes on a perversely moralistic tone. For instance, Marcia only becomes pregnant by sleeping around (contraception presumably only being used in the family bedroom). She has an abortion, without her husband’s knowledge, and is instantly traumatized. She is reduced to a mental state as if in punishment for her wrongdoing.

This impression is further strengthened by a conversation between Peter and Marcia, where Marcia justifies her abortion by saying. “Nothing was destroyed.” Peter caustically replies, “You said it cried.” Obviously aborted fœtuses don’t cry, but a sense of unspeakable horror is created. This image is then re-enforced by the many references to the distant and forlorn cry of some unseen animal. (It is later said to be the lost pup of the dugong killed by Peter.)

It is perhaps worth mentioning here that in the one scene where Eggleston does come near creating sympathy for Peter and Marcia, he plays down any emotional response. It occurs when Peter saves Marcia from drowning (suicide?). As he reaches her in the water, he pulls her back. A splash of foam darts past the lens; the music reaches a climax. But Eggleston (or editor Brian Kavanagh) undermines our response by cutting to a long shot as Peter lifts Marcia in his arms, out of the water. We are left stranded, uncertain of how to react.

The second major theme of the film, and one obviously linked with the first, is that of nature fighting back when con­fronted by man. In this case, the “confrontation” is Peter and Marcia camping in the bush. They are certainly careless and inconsiderate, dropping bottle-tops about, irrationally attempting to chop down a tree, randomly firing a rifle into the scrub, etc. They do not, however, attack the animals, other than to spray some ants and shoot the dugong, but that is long after the animals have attacked.

This lack of any major injustices being visited on the bush leaves the strong sense of menace evoked at the start basically unexplained. (I ignore the possibility that the animals are reacting to being invaded, albeit temporarily. That would place them on a human level of territorial possessiveness – hardly what such defenders of the animal world as De Roche and Eggleston would want.)

Perhaps Eggleston is suggesting that nature is reacting to the disturbing and aggressive state of Peter and Marcia’s relationship. If read this way, however, the film becomes a far more traditional, and less interesting, psychological thriller.

Whatever the motivating causes, confrontation does exist and the animals make the humans aware of this (e.g., the dropping of Marcia’s shoe on Peter’s lap, the attack on the Nissan, etc.). There are also hints of complicity in the animal community, but that is sadly never spelled out.

At this point the film loses focus. Because the animals are shown to be menacing before they have been menaced, they are basically unsympathetic. In fact, the only sympathy they ultimately elicit comes indirectly from the viewer’s unerring dislike of Peter and Marcia – killing the humans becomes a way of avoiding any more of their interminable marital brawls.

Eggleston also discourages identi­fication with the animals by playing about with their natures. An inoffensive goanna is photographed to look like a crocodile, while a wombat is asked to take on demonic portents. It just doesn’t work and Eggleston would have drawn a far more effective contrast by portraying the animals as they really are.

This confusion over where our sympathies lie also mitigates against Eggleston’s attempts to generate tension. One doesn’t care who wins, only how long the contest will last.

Perhaps the music is most at fault here. While a clever and highly professional score (one no doubt easily accessible to overseas audiences), it seems evocative of the wrong things. It spells menace when there really isn’t any (cf the opening shot of a crab on a rock), and it underlines tensions that would have been better off understated. But when properly attuned to an image (as in the last shot), Michael Carlos’ score is highly effective. 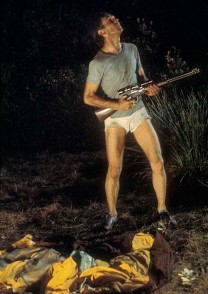 One sequence where Eggleston does evoke a fair sense of mystery is when Peter finds the deserted campsite down the beach. As he approaches their camp, we (but not him) observe the roof of a blue van breaking under the waves in the background. It is quietly effective and eerie, as is Peter’s subsequent search under water, to find a child sitting listlessly on the back seat.

Most successful, however, are the scenes of Peter running madly through the bush. The use of long camera movements, crisp cutting and a well-devised soundtrack creates a sense of thrashing terror. (This is in nice contrast to the more muted terror of the first drive into the bush at night.)

Eggleston, in line with most directors of thrillers, also asks his characters to do many silly things to further the narrative. Thus, a trapped Marcia abandons her only hope of refuge (the Nissan she is driving) and runs off into the bush only to be shot by a dazed and unaware Peter. It is also stretching credibility to expect Marcia to approach the campfire, after her terrifying flight, without calling out in advance.

Ultimately, Peter finds his way out onto the highway. But the animals do not let him go, a cockatoo swooping down to distract a semi-trailer driver whose vehicle (filled with cattle) crashes Peter to the ground. He lies dead on the roadway, just like the kangaroo he ran over on his drive out of the city. The camera retreats to the body of Marcia, now no longer visible, as the forest ferns close over her. The music increases the sense of menace.

The “poetic justice” of this neat ending is unsettling. Man kills man and the animals keep clean hands – but not our respect. And that is what is most dis­appointing about this interesting film: the filmmakers’ attitude to the animals. Occasionally, Eggleston and De Roche come across as well-qualified speakers on their behalf; at other times, the animals are merely misused pawns in a larger, and not always well-elucidated, game.