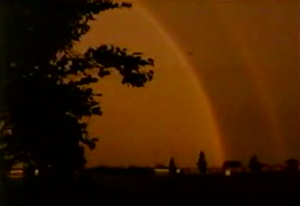 Storms have been a motif found throughout filmmaker George Kuchar’s work. Whether manifested in the cumulonimbus and nimbostratus clouds that hang over his characters in films such as Eclipse of the Sun Virgin (1967) and Forever and Always (1978), the whirlwinds of emotions revealed in the dissection of filmed drama in the likes of Hold Me While I’m Naked (1966) and I, an Actress (1977), the meteorological simulacra put to work in the low budget visual effects extravaganza A Town Called Tempest (1963) – made with his brother Mike – or the shit-storm of controversy that accompanied the screening of his video Weather Diary 1 (1986) at the August 1996 Robert Flaherty seminar in Aurora, New York (1), Kuchar has frequently functioned as a storm warning signal for an upcoming cinematic hurricane.

An obsession with weather came early to Kuchar, who as a youth often played hooky on the rooftops of the Bronx apartment complex his family called home. It was there that, when he and his teenage twin weren’t visiting nearby movie-houses and gorging themselves on Hollywood action and melodrama, they were remaking it in their own 8mm image. While New York City weather patterns dictated the lighting and the skies that appeared in the pair’s small-gauge epics, George has reminisced that “weather was the intrusion of nature into the city” (2). He’s spoken of having been interested not only in different kinds of clouds and the weather associated with them, but also of how blizzards and electrical storms changed New Yorkers’ behavioural habits and dominated conversation and news broadcasts.

In the Kuchar Brothers’ terrifically enjoyable memoir Reflections From a Cinematic Cesspool, George consistently describes weather activity when setting the scene for each anecdote recounted. He reveals the details of his day job before leaving New York to teach film production at the San Francisco Art Institute in 1971: he created maps and illustrations for a local television weather broadcast (3). But since the mid-1970s, his greatest annual exposure to the elements has come from his pilgrimage each May to a town at the intersection of Route 66 and Tornado Alley: El Reno, Oklahoma. Kuchar has returned each year to Oklahoma to be, if not a “storm chaser” (neither of the Kuchars ever learned to drive a car), then at least a storm witness, though usually from the confines of a motel room. Even when not in the direct path of the twisters and other extreme weather phenomena, this vantage provides a convenient window onto them if sometimes only that of the television set. During the first few of Kuchar’s visits to the region he remained in Oklahoma City; it was in the YMCA there that he wrote the screenplay for his student Curt McDowell’s monochromatic porn experiment Thundercrack! (1975) Within a few trips he moved his yearly base of operations to the more rural Canadian County, and its administrative centre El Reno.

While the 1977 film Wild Night in El Reno is not the first of Kuchar’s films to have been shot in Oklahoma (A Reason to Live [1976] prefigures it with scenes filmed there as well as in California), it is the earliest in which weather is the principal character. The only human beings seen in the six-minute piece are a woman briefly shown trying to use a payphone during a downpour, and the filmmaker himself, posed enigmatically beside graffiti proclaiming that “Jimmy Rush is a Pussy”. The majority of the film’s frames draw the viewer’s attention to the wind, clouds, rain and lightning strikes that accompany an El Reno storm. Many of the initial shots especially recall an Eric Sloane painting in composition and subject; his renderings of cloud formations in pastoral settings were an influence on the young Kuchar (4) and it’s no surprise that a film bringing out the nature observer in the director would resemble one of Sloane’s landscapes put into motion by the camera shutter and the churning winds.

Other shots are taken out the window of Kuchar’s room at the Frontier Motel, where a piece of hanging laundry seemingly dances in the breeze to the song “Has Anybody Seen My Gal?” (5), or directly into the sky. As gusts of wind are joined by cloudbursts, the sounds of a ticking clock and a thunderbolt serve as an abrupt segue between the jazz standard and the Frank Churchill/Larry Morey tune “Little April Showers” from Bambi (David Hand, 1942). The storm grows wilder, the sun sets, and the soundtrack cycles through a number of disparate musical selections matching the tempestuous images, resembling the behavior of a frenzied channel-surfer. With less than a minute to go in the film, the thunderstorm has passed and the music and imagery calm, coming to rest on a final still of Kuchar lying across railroad tracks as if a bathing beauty trying to catch the attention of the train operator.

Scott MacDonald has probably written more on Kuchar’s weather fixation than any other critic. He has identified Wild Night in El Reno as the “seed” for an ongoing video diary project (6). Beginning with Weather Diary 1, Kuchar has documented each of his return trips to El Reno in pieces ranging from a few minutes long to over an hour. These videos can uncloak the mystique of filming better than any behind-the-scenes DVD extra produced by Hollywood. Just about any filmmaker can relate to the necessity of waiting for the right weather, and if not everyone would follow Kuchar’s example of how to occupy himself in the meantime, his introspective instinct should feel familiar. But none of these videos have quite matched the furious beauty of Wild Night in El Reno. If that film is a “seed” then it should be considered a precious heirloom in underground filmmaking’s genetic heritage.