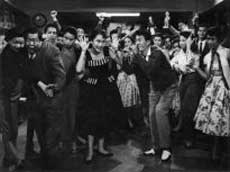 Like the film industries in the U.S. and Japan, the Hong Kong film industry was dominated by a few large companies that did everything from make films to own and run the movie theaters where they played. By the mid-1950s, two studios moved to the front of the pack: the legendary Shaw Brothers and Motion Picture and General Investment Ltd. (MP & GI), or as it was universally known, Cathay. Each made dozens of films a year, had stars and directors under contract, and operated large studios that ran practically 24 hours a day. Although both studios made broad selections of films each year, the Shaws became internationally known for their huangmei (opera) and later wuxia (martial arts) films, while Cathay was best known for its decidedly contemporary comedies, musicals and melodramas. If the Shaws hoped to transport their audiences to an imaginary Chinese past, Cathay productions such as Mambo Girl and Our Dream Car asked those audiences to imagine a different kind of Chinese future.

Ensconced in cosmopolitan culture, from airliners to mambo clubs, Cathay’s urbane entertainments envisioned a Hong Kong jet set that presaged the city’s eventual ascendance as an economic powerhouse. Central to this modern vision were the stable of actresses who portrayed headstrong, independent leads in these films, not the least of which was Grace Chang. Of the seven films in the 2007 New York Film Festival’s Cathay sidebar, five featured Chang, she of the sultry, man-eating gaze and volcano voice.

As a singer and actress, Chang exuded a liberated, freewheeling persona that ushered in an era of swinging times among a generation of post-war Chinese. Chang’s voice, powered by years of Peking opera training, rings with a bell-like clarity that compensates for its lack of delicacy or restraint. And when hitched to a mean mambo rhythm and lyrics like “shaking bodies drive everyone wild… dance as crazy, crazy, crazy as I am!”, her clarion call threatens to topple thousands of years of Chinese repression. The butchiness of her stentorian singing makes her ripe for camp appreciation among contemporary Sino-queers, including Tsai Ming-liang, who offered touchingly makeshift homages to her song and dance numbers in The Hole (1999). But her lasting impact on Chinese cinema is no less important than Brigitte Bardot’s on French cinema or Marilyn Monroe’s on Hollywood: when Asia Weekly conducted a poll of the greatest Chinese films of the 20th century, two Grace Chang films, Mambo Girl and The Wild, Wild Rose (Wang Tian-lin, 1960), made the list.

Mambo Girl, reputedly conceived when Cathay Studio head Loke Wan Tho saw Chang dancing at a nightclub, is the film that catapulted Chang to stardom, extensively exhibiting her dancing skill. Stephen Teo in his book Hong Kong Cinema: The Extra Dimensions says of Mambo Girl, “Hong Kong cinema found its most representative musical star-cum-actress and with Mambo Girl, Hong Kong cinema produced its first musical masterpiece” (1). Personally I don’t think Chang’s footwork is all it’s made out to be, but the poise with which she sells the latest imported steps is persuasive.

More disturbing is the subtext to be found in what otherwise may appear to be a teen melodrama plot serving as a perfunctory coagulant for the dance numbers. Innocent but spoiled party girl Kailing (Chang) overhears rumours of her orphan lineage, leading to a haunting, if dissonant scene where she envisions her birth mother as a peasant, in sharp contrast to her debonair, Western-clothed adoptive parents. Her search leads her to a washroom attendant who staunchly denies their biological link, even as she confirms it in solitude. Her Stella Dallas-esque sacrifice is a face-saving measure that subverts the New Society promises of the film – Kailing can be a symbol of the New Chinese Woman only if she doesn’t have a low-class family history to haunt her. Cheerfully reconciled with her adoptive parents and affluent classmates, Kailing launches into a ten-minute dance sequence in which she practically mambos the past out of her memory, even as her real mother watches through a doorway crack with sorrowful pride.