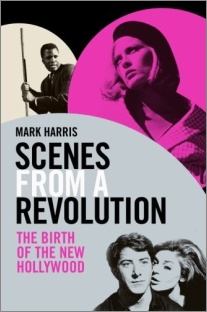 It is one of the most iconic film posters of the last 50 years. A shapely female leg splits the image horizontally, stocking halfway off, or halfway on – it doesn’t really matter, you get the picture. Beyond the leg, in the background, is a fully dressed young man with a distinctly bemused look on his face. He forms a vertical line, giving the image the sense of a viewfinder, the crosshairs of a rifle perhaps, homing in on the young man. “This is Benjamin”, reads the poster. “He’s a little worried about his future.”

The film is, of course, The Graduate (Mike Nichols, 1967), and the 21-year-old Benjamin is now instantly recognisable as a young Dustin Hoffman, such has become his fame since this debut film performance. We all know – as well – that the leg belongs to Mrs Robinson (played in the film by Anne Bancroft), the married woman with a Simon and Garfunkel song named in her honour, who was making Benjamin’s life decidedly uncertain.

In 1967 – the year The Graduate was released – it wasn’t only Benjamin who was worried about the future. Hollywood itself was in the throes of a breakdown of sorts, stricken by box office attendances that had been falling steadily for 20 years. The studio bosses who had seen Hollywood through its golden age in the 1930s and 1940s were – by the 1960s – dead, retired or out of touch with a rapidly fragmenting society, and the studios themselves were being acquired by large business conglomerates. This period in American film history has since become known as “New Hollywood”, a brief and supposedly exciting transitional phase of movie-making that lasted until the mid 1970s, and it’s the subject of a new book by journalist Mark Harris.

In Scenes from a Revolution: The Birth of the New Hollywood, Harris documents what he believes are the origins of New Hollywood by tracing the making of the five films that were nominated for Best Film at the 1967 Academy Awards. The Graduate, directed by newcomer Mike Nichols – the 35-year-old darling of the Broadway theatre scene – was one of them. Bonnie and Clyde (Arthur Penn, 1967) was another, starring and produced by Warren Beatty, “a twenty-nine year old actor with a spotty record” (p. 150). These two films were “game changers” (p. 1), argues Harris, and they were lined up on the red carpet against the traditional studio films Guess Who’s Coming to Dinner (Stanley Kramer, 1967), starring Katharine Hepburn and Spencer Tracy, In the Heat of the Night (Norman Jewison, 1967) with Sidney Poitier and Rod Steiger, and Doctor Dolittle (Richard Fleischer, 1967), starring Rex Harrison. Harris interviewed many of the surviving people involved in the making of these films and has trawled through hundreds of sources of information as research for his weighty 400-page book. He creates a detailed account of the myriad decisions that emerged from chaos, necessity, chance and manipulation to become immortalised on the big screen. It’s a book about the informal meetings of life, conversations from corridors and cafes, casting couches and crew meetings – the ones that really add up to history.

Harris starts his story back in 1963, with one of the screenwriters of Bonnie and Clyde, Robert Benton, sitting in a New York cinema watching François Truffaut’s Jules et Jim (1962). The films of the French New Wave (and their Italian counterparts) are for many film theorists the key to understanding what was about to happen in Hollywood. French directors like Truffaut, Jean-Luc Godard and Alan Resnais had developed a new aesthetic for filmmaking, one that challenged Hollywood’s traditional narrative and visual conventions. These films were casual and unstructured, and the characters in them reflective of a more liberated and sexually honest era that was emerging as the leading edge of the wave of baby boomers reached their twenties. For New Hollywood theorists, it was this audience that Hollywood had failed to notice as it churned out safe product, offered back catalogues to television programmers and sold off backlot real estate to cover mounting losses. Veteran director Fred Zinnemann described Hollywood’s situation at this time as “a self-imposed, self-induced trap with a dependence on best sellers, hit plays, remakes and rehashes” (p. 9).

No film better typifies the situation than the disastrous Doctor Dolittle. Conceived following the unexpected success of The Sound of Music (Robert Wise, 1965) (which had saved Twentieth Century Fox from bankruptcy), Doctor Dolittle was meant to be a guaranteed money-spinner. It was, after all, a lavish musical based on a best-selling book, with one of the most bankable stars of the time – Rex Harrison – in the lead. But in Harris’ mercilessly thorough hands, the story of Doctor Dolittle’s creation becomes an expensive joke, characterised by excess, ego and error. There are the many stories about Harrison’s outrageous behaviour, including the time he sang a song about his penis to the tune of “I’ve Grown Accustomed To Your Face” while his alcoholic wife, Rachel Roberts, who was not wearing undies, performed handstands. Then there are the many stories about the animals in the film. The sets were built on a slant so that they could be hosed down and drained, but the smell of excrement and ammonia was unbearable. To make matters worse, the long-suffering crew were frequently bitten by a variety of creatures and given a steady stream of tetanus jabs. On location in the Caribbean, the mosquitoes and sandflies were so bad that shipments of repellent were flown out from Hollywood, and on location in the quaint English village of Castle Combe, an eccentric British aristocrat sabotaged the set. The Dolittle tale is Harris’ light relief.

The story behind Bonnie and Clyde is much more sober, but no less chaotic. Writers Benton and David Newman, both enamoured of the French New Wave, decided to create an American film specifically for Truffaut to direct. They had never written a script before and knew nothing about film grammar, yet managed to meet with Truffaut who teased them a while before passing up the director’s job. They had all but given up their dream of making the movie when Beatty bought the rights and started selling the idea to studios. He was rejected by everyone in town, one potential investor commenting that reading the script was “like looking in a sewer” (p. 93). Harris makes it clear that the film was only made – and only commercially released – because of Beatty’s tenacity and energy, and perhaps this is the key insight of the book. Making a movie, it seems, is a very tough business that takes years of devotion, especially when it’s something a little different. Beatty’s mantra for four years seems to have been “whatever it takes”.

By comparison with Beatty’s project, Look Who’s Coming to Dinner was a symbol of old Hollywood. Directed by Stanley Kramer, who had grown up in the studio system, it brought together (for the last time) two of the greatest stars of the previous 30 years, both of whom were well into their sixties. Playing husband and wife were Katharine Hepburn – looking decidedly shaky – and Spencer Tracy – looking decidedly stiff. Combining these performances with a painted backdrop on the studio set, rear projection car scenes and a homely approach to race relations wasn’t going to result in a film that would catch the imagination of young America, busy protesting against Vietnam or for women’s rights. When Kramer toured campuses to help promote the film, he was shocked to find that students thought his social message lame and conservative.

The Graduate, on the other hand, touched a nerve with this same audience. In his examination of the impact that film criticism had on the five films, Harris notes that a 25-year-old Roger Ebert – newly appointed reviewer of the Chicago Sun-Times – called The Graduate “the funniest American comedy of the year…because it has a point of view. That is to say it is against something” (p. 381). More established critics had panned the film as being “alarmingly derivative”, “a bad joke” with “rock-bottom” music (p. 380). It went on to become the most financially successful of the five films, with college kids across the nation getting the point that Nichols was making about the materialistic nature of parents. Much of the success of the film goes to Nichols himself, who admits in an interview that in 1965 he “wasn’t entirely sure how a camera worked” (p. 74). He was a hard taskmaster on set, driving the insecure Hoffman – who never understood why he had been cast in the role – to distraction. Every day when Hoffman went to the bathroom to clean up before the cameras rolled, Nichols would taunt him with the same line: “don’t forget to clean the inside of your nose” (p. 311).

Whilst The Graduate can easily be seen as a watershed film, dividing generations both in its story and its 1960s audience, In the Heat of the Night doesn’t fit quite so comfortably into Harris’ hypothesis. He delves deeply into the problems of its making (most significantly, the overt racism experienced by Poitier), but this was an independently produced film, shot in an unusually realistic manner, and directed by a relative newcomer to the world of film (although Jewison was an experienced TV director). It’s a halfway house of a film, made by a talented group of forty-somethings who were neither old nor new Hollywood, and who were more carefully adjusting narrative and style to the times, and making a decent return in the process.

Although the idea of a revolution in Hollywood has become a popular concept (1), it is largely a romantic construction. One glance at the four films that topped the box office for the decade – The Sound of Music, One Hundred and One Dalmatians (Clyde Geronimi, Hamilton S. Luske, Wolfgang Reitherman, 1961), The Jungle Book (Reitherman, 1967), and Doctor Zhivago (David Lean, 1965) – gives a more realistic picture of what was going on. The idea that there was a moment of “birth” (Harris suggests a wild party at the Fondas’ beach house where old Hollywood Henry yelled at his new Hollywood son Peter to turn down the music) simplifies the complex and long-term micro-economic drivers of the industry that were in play. The studios may have been down in 1967, but they definitely weren’t out. They were still the most powerful institutions in the field and, by the mid 1970s, had managed to complete a successful reinvention of the way that the movie business was conducted. That they ever lost control of filmmaking to a creative young bunch of newcomers is as far-fetched an idea as many of Hollywood’s best plots.

Despite the over-romanticisation, and the problem that five films was never going to be enough of a sample to support the argument, Harris’ book is an entertaining and illuminating read, especially for anyone interested in understanding the incredible complexities of filmmaking. From script development and casting to screening and criticism, Harris strips the process back to its human core, and reveals the many accidents, happy and otherwise, that create reality. As just one of many examples, if The Graduate had been cast the way everyone suggested at the time, it would have been Robert Redford standing behind Mrs Robinson’s outstretched leg.

Scenes from a Revolution: The Birth of the New Hollywood, by Mark Harris, Canongate Books, Edinburgh, 2008.