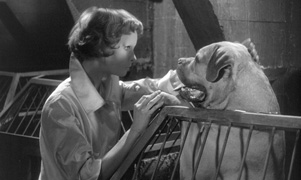 At the time of its release in 1960, responses to Les Yeux sans visage ranged from condescending to contemptuous to outright hostile. At preview screenings in France and Scotland, several audience members had to be stretchered out after fainting, causing a scandal in the British press. While Sight and Sound found the film “no more than nauseating” (2), the mainstream press, as Raymond Durgnat puts it, “disagreed as to whether it was actually too horrible to bear, or whether it incompetently failed to horrify, or whether it incompetently failed in every respect except horrifying” (3). In France, the response was more moderate, ranging from lukewarm enthusiasm to vague disdain or disappointment. The majority of critics were surprised by Franju’s move from court-métrage (4) to genre filmmaking, and unconvinced by the results. While British critics were outraged by the film’s gore and excessive shock, the French stated it was merely a tired repetition of German expressionism and, worse still, Grand Guignol theatre (5). Their real complaint was with Franju’s perceived descent from auteurist (and socially committed) filmmaking into a populist genre. Somewhat ironically, principal amongst the voices making this accusation was that of Jean-Luc Godard, who claimed that,

there’s something very saddening in Franju’s career, and his steadily widening distance from all the hopes we placed in him, his self-burial in conventional productions, in five-finger exercises of style, and in Selected Classics. (6)

It was not until the 1986 re-release of the film, in conjunction with retrospectives at the National Film Theatre (NFT) and Cinématheque Française (7) of Franju’s back catalogue, that its status within the history of French cinema began to be re-evaluated. For many, the film was mobilised as a first step to a reassessment of Franju’s status as auteur. Critical approaches suddenly became concerned with emphasising the continuities between the film and his court-métrages, signalling the features salient to Franju’s wider concerns and defining what Robin Wood describes as his “personal iconography” (8). Key themes, dichotomies and motifs include, but are not limited to: personal identity/the double, the fantastic/everyday, the face/the mask, animals/humans, light/shadow, twisted authority/youthful rebellion, the city/the countryside. Using these binary oppositions as touchstones, Wood, for example, argues that the film demonstrates a personal ethic and aesthetic as clearly as his more obviously “signature” films, such as Le Sang des bêtes (1949) or Hôtel des Invalides (1951).

With auteurism still the guiding thread, other critics drew on biographical information about Franju in order to contextualise the film historically and theoretically. Whereas once it had been unfavourably compared to contemporary releases by Nouvelle vague filmmakers including François Truffaut and Godard (whose debut works had both been released the same year that Franju’s film was completed), Les Yeux sans visage was now discussed alongside the work of Left Bank filmmakers such as Agnès Varda, Alain Resnais and Chris Marker – filmmakers who were closer to Franju’s age than many of the New Wave directors and who shared his interest in violence and trauma. In keeping with general approaches towards this school, such discussions tend to be heavily politicised. Hawkins (9) sees the film as an allegory of events in European history, either of Nazi imperialism (Dr Génessier’s block-house-surgery as concentration camp sanatorium) or France’s Algerian war, in which Franju had fought and which was underway at the time the film was made (here, Génessier’s torture-victim relationship with his daughter Christiane becomes an analogue of the relationship of colonial to colonised power, including the actual torture of Algerian freedom fighters by the French military). Durgnat, meanwhile, offers a more literal reading of the film as a critique of scientific ethics and the bourgeois cult of the family which was a prop of Pétainist politics. Elsewhere there was a tendency to link the film (as well as other works from Franju’s oeuvre) to an earlier surrealist movement. So Simon Scott, writing in Shivers (10), draws a comparison with Jean Cocteau’s La Belle et la Bête (1946), and traces the links between Franju’s film and fairytale narratives, while Sight and Sound’s Iain Sinclair describes it as “Angela Carter collaborating with Simenon” (11). The film’s opening scenes in particular are frequently cited as evidence of a surrealist bent: the 2CV sliding through the darkness, its headlights illuminating the abstracted branches of trees on the roadside. “It’s not ‘a’ 2CV, it’s the 2CV”, states Marc Chevrie, “It’s presence is opaque, and so mysterious…. Like Bunuel, Franju demonstrates a disturbing ability to render the everyday strange and threatening.” (12)

In recent years, the legitimisation of Cultural Studies within the academy has brought about a shift in critical readings of the film, which begin to focus on the elements of horror, film noir, the thriller and melodrama within the film. Claiming Franju as a “pioneer” of the genre, Adam Lowenstein, for example, mines Les Yeux sans visage for evidence to support a reading of the film as “shock cinema” (13). Historical links are made once more to German expressionism and early European horror through the film’s cinematography, but Lowenstein also highlights narrative affinities with Universal horror of 1930s and the film’s historical coincidence with 1950s science-fiction monster movies and British Hammer horrors. His is the most fully articulated version of a position assumed by numerous critics, which sees Les Yeux sans visage as a seminal work in the horror canon, a claim supported by the fact that the film was released in the US, dubbed, as The Horror Chamber of Dr Faustus, and has subsequently gained a cult following among horror fans. In France, however, horror is subsumed by the category of the “fantastique”, which also bridges science-fiction and fantasy, and in a convenient critical act of legitimation, Les Yeux sans visage has been named as “Exhibit A” in the case for France as a maker of films fantastiques (the very fact of its dominance undermining these arguments – there are so few other films that can be used as evidence that the work is the exception that proves the rule).

This generic labelling has some worth, but at the same time it is rather reductive, and it should be noted that Franju was resistant to such readings of the film, claiming that rather than a horror, it is “an anguish film”. If there is horror to be found, it is as much in an overwhelming sense of unease as in a series of generic markers and, as Durgnat points out, this is where overlaps with the noir genre occur (14). A prevalent atmosphere of claustrophobia and despair (and mistrust) is a key feature of this genre, as are, stylistically, the use of chiaroscuro and low-key lighting, and narratively, the importance of policemen and detective work, as well as criminals. Les Yeux sans visage is characterised by its stark contrasts of lighting between adjacent scenes, for example in low-ceilinged, brightly lit interior of the operating theatre and the gloomy roominess of Dr Génessier’s villa elsewhere: in the surgery, all gleams – especially the scalpel – but elsewhere there is nothing but shadowy claustrophobia. These two elements come together in the opening sequence, as light bounces off the hood of the black 2CV, into the encompassing darkness of night. Where the film critically diverges from noir typing, however, is in its focus on the female victims of crime, rather than the male perpetrators and their pursuers. Christiane, undoubtedly the protagonist of the film and arguably its only sympathetic figure, is a fragile woman in need of protection or rescue (a figure echoed by the other women in need of rescue, especially Juliette Mayniel as Edna, her bandaged face a visual double of Christiane’s masked one). Her character is fundamental to Kate Ince’s insightful reading of the film as melodrama, in which melodramatic action is linked to images of passive and victimised femininity, with all the pathos to which this gives rise. Christiane’s eventual revolt, Ince points out, is “extraordinarily melodramatic” (15), right down to the mute shake of the head with which it begins, so typical of melodrama’s voiceless heroines.

Ince concludes her reading of the film by arguing for an embracing of the plurality of the film’s generic markers, and suggests that such a multiple identity and belonging to plural genres is what characterises Franju’s feature filmmaking as a whole. But genre readings themselves expose the plurality of authorship. To use the film as part of an argument for Franju as an auteur is to underestimate the roles played by his collaborators. Writers Pierre Boileau and Thomas Narjecac were among the foremost writers of “polar” (pulp detective novels) of their day, and prior to their collaboration with Franju had provided the source material for Henri-Georges Clouzot’s Les Diaboliques (1954) and Alfred Hitchcock’s Vertigo (1958). Likewise, cinematographer Eugen Shuftan had experience in shooting French Poetic Realist drama as well as 1920s German expressionist works: two movements that foreshadow later developments in noir and horror. And this is without mentioning the intertextuality involved in the casting of Alida Valli and Pierre Brasseur, or retrospectively, by the scoring of the film by Maurice Jarre.

Whether genre studies or auteurism, then, the applications of such “approaches” to Les Yeux sans visage all too often overlook the elements which don’t fit the required pattern. And while recent critical re-evaluations have undoubtedly gone some way towards legitimising a previously maligned work, what is most remarkable about the film’s recent reassessment is the way it has been so easily appropriated by so many critics as evidence of their own concerns: often to the detriment of the film’s own multi-facetedness. Instead, the breadth of response to the film – both positive and negative – should be taken as evidence of its extreme richness. It is certain that, to this day, there is much to be left to be understood about this powerful and mysterious film.