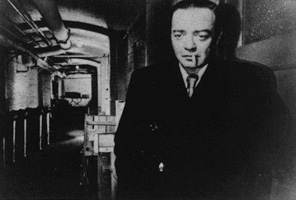 He filled the room… though he was very thin and fragile. I had never met a man with this radiation, this aura.

More than half a century seems time enough to be able to look in history’s rear-view mirror back to traumatised postwar Germany and Peter Lorre’s sole writing and directing credit. Lorre’s Der Verlorene is a brooding and fearless but little seen attempt to reconnect to his native soil (after his 18-year exile in Paris, London and Hollywood), but equally designed to jolt his homeland into an appreciation of the psychological brutalisation that had made the war possible. At the same time, Lorre sought to stimulate a depressed film industry still struggling to rise from the ashes of Nazi control, and which had wrecked it with madly overreaching propaganda spectacles like Ohm Krüger (Hans Steinhoff, 1941), Titanic (Herbert Selpin, 1943) and Kolberg (Veit Harlan, 1945) (2).

In fact, the German public proved not so keen to see their descent into fascism and subsequent postwar deterioration embodied in the serial killer format (at its premiere in Frankfurt am Main on 18 September 1951, the film played for only ten days [3]), so Der Verlorene became a kind of orphan film, rejected at home and withheld from US release until 1984, twenty years after Lorre’s death. By keeping the film out of America, Lorre apparently sought to avoid unwelcome attention from the McCarthyist witch-hunt raging at the time, and which had driven his best friend Bertolt Brecht out of his wartime refuge in the United States after a single contentious, cigar-smoking appearance before the House Un-American Activities Committee.

Still, if the film offered little consolation for postwar privations and psycho-social depression, the narrative now remains striking in its restraint, insidiously leading the audience to see the story as a metaphor of damaged national identity and gnawing collective guilt. Scripted with uncredited assistance from director Helmut Käutner, the plot was first nurtured as a variation on Guy de Maupassant’s story “The Horla”, but then took on the specifics of a crime story reported in Hamburg newspapers about a certain Dr. Karl Rothe who killed his former assistant and then stepped in front of a locomotive (Lorre even keeps the same name for his protagonist).

Unlike such recent filmic recreations of the Nazi era in Downfall/Der Untergang (Oliver Hirschbiegel, 2004), Sophie Scholl: The Final Days/Sophie Scholl – Die Letzten Tage (Marc Rothemund, 2005) and Black Book (Paul Verhoeven, 2006), with their giant red banners draped across town halls and black swastikas prominently displayed, Lorre uses no obvious decorative devices, hewing to an unusual abstraction. Here we see not a single outward sign of the Thousand Year Reich on screen, with not one mention of Der Führer or the Gestapo, and even the cratered rubble of blasted-out buildings figures only toward the film’s conclusion. Nevertheless, the film feels permeated by the Nazi psychosis.

In fact, the film’s indirection challenges the viewer as the oblique narrative bends away from orderly progression, unfolding in gripping flashbacks yet proceeding with an unfamiliar internal rhythm, threatening now and again to turn into a police procedural or an espionage thriller. In its uniquely weightless form there’s something missing, a transitional step that would clarify the storytelling, but Lotte Eisner saw this as a modernist disdain for uniformity: “We have to read between the lines… the Nazi who plays an important part throughout the film is completely defined by his manner, his laugh, and his language, and only once do we see him in the extreme situation of the killer” (4).

Never self-important and hardly wasting a shot, the film seems filtered through an actor’s sensibility, focusing on individual scenes and moments rather than an overall shape. This is partly a result of Lorre’s experimental approach that encouraged the actors to improvise dialogue at the expense of the shooting script. Again and again, Lorre gives preference to individual line readings and on-set improvisations rather than a consistent tone or clear narrative contours, yet the film gathers power as it moves to a devastating climax that strikes deep and bold.

Lorre, newly released from a sanitarium where he endured sleep cures and even electric shock therapy to break his morphine addiction, also found himself burdened with a jinxed production. First, actor Karl John was bedridden for over a month with injuries from an automobile accident; three weeks later the distinguished producer Arnold Pressburger (5) suffered a cerebral hemorrhage and died; then the assistant director resigned over Lorre’s willful tinkering with the film’s structure; and finally during post-production an electrical short burned down the editing suite housing the negative (the film had to be reconstructed from a copy) (6).

Looking thin and drawn, the 47-year-old Lorre initially emerges, almost unnoticed, from a railroad crossing, after a locomotive passes (as it will three times throughout the film, like fate on rails). The unusually low horizon leaves room for a bleak expanse of white sky penetrated by spiky telephone poles, suggesting the otherworldly and abstracted landscape of Nosferatu (F.W. Murnau, 1922). While working with Fritz Lang, G. W. Pabst, Josef von Sternberg, Alfred Hitchcock, Frank Borzage and Frank Capra, the actor had presumably learned a thing or two, evolving an unfussy style, that although it may fall short of the unsuspected lyricism found in Charles Laughton’s The Night of the Hunter (1955), still, in Der Verlorene, shares that film’s powerful sense of vulnerability in the face of evil.

This deceptively naturalistic opening portrays Rothe as an urbane and confident physician making the rounds in a refugee camp, ministering to his patients until a ghost from his past unpacks repressed crimes and tormented memories, destabilising his ordinary reality with film noir doubt. As darkly revelatory flashbacks expose to what murderous depths this detached research scientist fell (while enabled and protected by the intelligence service), encroaching darkness and claustrophobic framing suggest a muted horror film, a nightmare that shows how easily the apolitical can be manipulated when aggressive fanatics take control of the country.

Fascism made the social structure run backwards, pitching accomplished professional Rothe into the control of his loutish former underling Hösch and a condescending intelligence agent Winkler, both steeped in cynicism and corruption, mirroring the predicament faced by the German population at large (and indeed by Lorre himself). Initially respectful, after a few drinks Hösch turns loud and brutish, a stand-in for every arrogant Nazi who ever barked across the silver screen, and triggers Rothe’s downward spiral with humiliating revelations that his fiancée Inge has a track record with other men, including Hösch himself. Winkler and Hösch mock Rothe’s “antiquated ethics” and cover up Inge’s murder as suicide (“self-strangulation with her own belt”), but the doctor acknowledges their murderous contagion when he names three bacilli Winkler, Hösch and Rothe: “If you inject any one of these into the blood of a healthy person, he’ll die”.

An incomparably singular screen presence, as early as 1929 Lorre was already playing a sex maniac on the Berlin stage in Pioneers of Ingolstadt opposite Lotte Lenya. Displaying mad vulnerability and unsettling psychopathic pathos as the desperate child killer in Lang’s M (1931), and haughty arrogance in Sternberg’s Crime and Punishment (1935), the actor was never afraid of extremes, even when trapped in yellowface for eight Mr. Moto B-movies. But too often Lorre had to settle for such supporting roles as the obsequious toad of The Maltese Falcon (John Huston, 1941) or Casablanca (Michael Curtiz, 1942) or The Chase (Arthur Ripley, 1946).

Strong and confident here, Lorre allows no hysterical outbursts or outsized acting effects here to pull our attention away from the character to the actor, employing none of the grotesqueries found in later performances like his wizened buffoon in Silk Stockings (Rouben Mamoulian, 1957) or The Big Circus (Joseph M. Newman, 1959) in which he played an actual clown. It’s a rare set-up in Der Verlorene that doesn’t include Lorre drinking and smoking incessantly (his bondage to nicotine betokens Rothe’s helplessness before the forces ready to exploit his weaknesses), so a very late landscape shot carries a momentary shock when his character walks right out of the frame, leaving us to look at the emptiness.

Rothe’s charged encounters with five women who seem to invade his space provide distinctive opportunities to Lorre’s actresses, who deliver performances of startling density, even if some scenes feel arguably under-dramatised: Renate Mannhardt as Rothe’s faithless fiancée (“Nobody gives a shit about me!”); Johanna Hofer as her placid mother who transitions to become the doctor’s caregiver; Lotte Rausch as a straying hausfrau attempting a sidelong seduction on a train (“I’m too hot-blooded”); Eva Ingeborg Scholz as an innocent young teacher; and Gisela Trowe as a streetwalker with well-developed survival skills. No neutral spaces are left for the suicidal Rothe; consumed by shame, he wanders through the bombed streets of Hamburg marveling at the irony: “Thousands were dead. Thousands would have liked to live. Only I had been restored to life. Incomprehensible!”