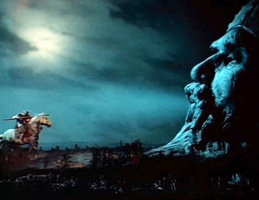 Russian fantasy is entrenched in national utopian tendencies that seek to transform a fetid social reality into a glorious, prosperous and magnanimous universe. The Soviet Union was founded on the fantasy of romantic socialism where odes to national unity, the romance of labour, and the parable of the subjugation of evil, played an integral role. Soviet culture mined a potent and pervasive folk tradition to help create a fantastical image of socialist romanticism, looking to the past, especially the legendary medieval world, to paint the template for the future.

Ruslan and Ludmila is a wonderful expression of Soviet fantasy that combines epic mythology, an enchanted and magical world, and sparkling dialogue… all delivered in verse (1). A visual feast of indescribable proportions, this fantastical fairytale features a passionate princess, a handsome hero, bearded villains, giants and dwarves, wizards and witches, and the most amazingly imaginative settings. Enormously successful, not just with children, this now classic fairytale was the tenth most popular film on release in 1973 (attracting 34.6 million viewers) and continues to be regularly broadcast on Russian television.

This two-and-a-half hour fantasy is a Soviet retelling of the famous 1820 epic poem by Alexander Pushkin, one of the most beloved of Russian poets, about the power of true love to overcome evil. Set in the Ancient Rus capital of Kiev sometime in the 9th century, it tells the story of the knight Ruslan (the heroically blond Valeri Kozinets), who as reward for his recent conquest of the Pecheneg Tartars is granted the hand in marriage of the Grand Prince’s daughter, Ludmila (the radiant Natalya Petrova). When the feast ends, the young bride is led to the marriage bed. But as the young lovers embrace, Ludmila is magically kidnapped without leaving a trace. Furious that Ruslan failed to protect his new wife, the Grand Prince annuls the marriage and promises to give his daughter’s hand to any man who can rescue her. Three of Ludmila’s former suitors, along with Ruslan, set out to find her and bring her home.

As Ruslan journeys through the wilderness on his quest, he meets a kind hermit wizard who tells him that his beloved has been abducted by an evil dwarf sorcerer, Chernomor (Vladimir Fyodorov), and that she is being held prisoner in the villain’s mountaintop castle. Meanwhile, the feisty Ludmila protects her honour against the bearded dwarf and his horde of Kabuki-styled guards in an amazingly choreographed action scene. Ruslan must also battle other witches and goblins, a giant grumpy head, as well as his bride’s jealous suitors in his quest to find Ludmila. And when he does find her, his quest is still not over. He must defeat Chernomor, get the unconscious maiden back to Kiev, overcome further deceit, a vicious attempt on his life and, lastly, protect the besieged city from enemy nomads – all standard fare for a Slavic hero.

Ruslan and Ludmila is director Alexander Ptushko’s final film, a four-year labour of love for the master of fantasy and literary adaptations. Director, revolutionary animator and special effects pioneer, Alexander Ptushko (1900-1973) is renowned for his fantastical, visually innovative films integrating real people with puppets and animation. He has subsequently been anointed “the Russian Spielberg” and the “Walt Disney of the USSR”, but Ptushko is really more like a Soviet Peter Jackson with a wild imagination, seemingly endless resources, and a pioneering approach to developing special effects. In a career spanning nearly 50 years, with 19 feature films as director, writer and master of visual effects, Ptushko developed a unique way of representing Russian folk imagery and national culture.

The reason the world of Ruslan and Ludmila is so enchanting and memorable is largely because its aesthetics are so different from anything seen in the West. The film evokes a sense of wonder and a swelling feeling of heroic nobility. The film’s visual palette is influenced by 20th century adaptations of Russian folk art, Russian children’s illustrations, and a grotesque imagination developed from the 19th century romantic tradition. It would be unkind to suggest that the film’s visual effects are dated as they invent a distinctive and consistent aesthetic. Ptushko creates miraculous effects through the combination of in-camera techniques, artificial and natural settings – luminous crystal palaces and abundant coral gardens are placed alongside skeleton strewn hillsides and battle scenes. My favourite scene in the film is when on a dark and gloomy night Ruslan challenges a giant – a disembodied talking head that discharges flocks of birds when it sneezes – to battle. While obviously achieved by the combination of the artifice of matte painting and contrasts in size of the figures filmed, this and other equally bewitching images are otherworldly and fantastical and allow our imagination to fill in the gaps in a way denied by the intense detail of CGI.

Nevertheless, Ptushko’s fairytale world of demons and seductive maidens does have some imperfections. The film does contain some silly, overly theatrical staging, a paucity of close-ups and detail, inexcusable overacting (especially from the bad witch), questionable ventures into musical theatre, and instances of gratuitous kitschiness and wantonly dodgy special effects. But the film is as visually exhilarating as its plot is engaging, its symbols resonant and worthy of deeper consideration. As one reviewer on The Internet Movie Database enthuses, “This is the Russian Lord of the Rings, in a more funny way”.

Through Ptushko’s fairytale films we can get a sense of the ways in which the Soviets wanted to represent their folk history and heroes – revolving around the liberation of captured maidens and chained titans from evil wizards. Soviet cinematic fantasies that reconstructed the past were invoked in the presentation of national pride and an image of a noble and heroic Russian culture. Rightly considered a Soviet classic, Ruslan and Ludmila remains relevant today as pure fantasy and as an ideological artefact of Soviet social romanticism.