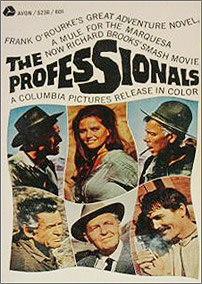 Richard Brooks is attracted to violent subjects, but his direction lacks the force to express them. His punches are seen but not felt, and his films consequently lack any lasting impact

Considering the films that surround The Professionals in Richard Brooks’ credits, you might imagine that the writer-director thought of himself as slumming it when he made this generally satisfying but far from genre-stretching action film. The Professionals followed in the wake of a sequence of adaptations by Brooks of elite literary matter: Tennessee Williams’ Cat On A Hot Tin Roof (1958) and Sweet Bird of Youth (1962), Fyodor Dostoyevsky’s The Brothers Karamazov (1958), Sinclair Lewis’ Elmer Gantry (1960), and Joseph Conrad’s Lord Jim (1965). It is also the film immediately preceding one of the most celebrated releases of his career, the adaptation of Truman Capote’s In Cold Blood (1967). Undemanding genre fare did not occupy much of a place in Brooks’ agenda, although he initiated his career with the scripts for two of the audaciously overblown Maria Montez-Jon Hall Universal vehicles: White Savage (Arthur Lubin, 1943) and Cobra Woman (Robert Siodmak, 1944). Brooks elevates The Professionals, for better and for worse, above a simply satisfying program picture by stirring in a sufficient dose of testosterone-laced cynicism to convince an audience that more occupied his mind than excessive force and audacious protagonists.

The central narrative line of the film draws upon a trope popular at the time and epitomised by John Sturges’ The Magnificent Seven (1960), and taken up the following year by Robert Aldrich in The Dirty Dozen (1967). An elite body of singularly qualified individuals is hired for a job no one else could complete and which very well could lead to their demise. These narratives establish their protagonists’ personalities without access to any excessive backstory; their characters are shaped by their particular brand of expertise. In other films of this nature, the set of protagonists battle one another in one way or another, as though they were some kind of pack in search of their alpha male. Brooks’ quartet of commandos – Bill Dolworth (Burt Lancaster), Henry “Rico” Fardan (Lee Marvin), Hans Ehrengard (Robert Ryan) and Jake Sharp (Woody Strode) – cooperate without much cleavage in their mutual endeavour: rescuing the wife, Maria (Claudia Cardinale), of tycoon Joe Grant (Ralph Bellamy) from her purported kidnapper, Jesus Raza (Jack Palance), a Mexican revolutionary. The issue of Sharp’s race or Ehrengard’s sympathetic concern for their horses occupies very little, if any screen time. Dolworth and Fardan do possess past history both as participants in Villa’s military campaigns as well as in their unsuccessful efforts to make a quick buck at various hare-brained schemes. But these men act as a unit; the final shot of the four of them across the widescreen reinforces everything that the preceding two hours establishes.

The drama, such as it is, in The Professionals, arises from matters of ethics and ideology. The conflict centres on how one distinguishes between good and evil. As Dolworth jocularly comments at one point, “Maybe there’s only been one revolution since the beginning – the good guys versus the bad buys. The question is – who are the good guys?” At times, Brooks’ script allies all that is laudable with a revolutionary vanguard. For example, Fardan’s Mexican wife committed herself to the cause of Villa, and others, espoused, and lost her life for it. Her husband seems to have shared that enthusiasm, only to abandon it with her demise and that of so many other comrades, now buried in the “cemetery of nameless men”. Dolworth, by contrast, treats polemics with a lighter touch; he seems attracted as much to the turmoil let loose by his skill with explosives than whatever cause that devastation protects. Brooks appears to associate ideology in the long run with human passion, not any party platform. The appeal of polemics is as fickle as the physical beauty of other human beings. As Raza says, “Without love, without a cause, we are nothing. We stay because we believe. We leave because we are disillusioned. We come back because we are lost. We die because we are committed.”

In the end, we discover, it is passion that has driven both the kidnapping and Grant’s eagerness to recover his wife. And our protagonists have been led into this cabal of colliding agendas without forewarning, although it comes as no surprise where their true allegiances lie. One seeks in vain, I imagine, for some larger and more satisfying allegory behind this apparent shell game of intentions. Brooks may allude to the tentative construction of liberal sentiments through the equivocal actions of his protagonists, yet they eventually fall into line in the last reel without any evident grappling with their consciences or their convictions. The cause of their change of heart is simple: Grant is a self-involved old man who believes he can buy his wife’s affections; Raza may try to kill them, but his devotion to Maria and dedication to a cause outweigh the money they will lose by abandoning their mission.

If the ideological core of The Professionals ends up coming across as more confused than compelling, one turns with an almost equal sense of dissatisfaction to the physical action in the picture. Brooks may well blow buildings up real good and stage a spirited though short escape sequence that creatively employs mining cars (and that may well have planted a seed in the minds of George Lucas and Steven Spielberg that emerged in Indiana Jones and the Temple of Doom [1984]), but he pales in the face of those poets of physicality like Don Siegel or the aforementioned Robert Aldrich. The violence in The Professionals possesses a perfunctory air, as though Brooks recognises he needs to incorporate some mayhem out of generic necessity but just cannot gather up the interest to give it any rhythm or grandeur or glory. There’s something annoyingly flaccid about these sequences, as though the director wished to simply get through them so that his characters could return to their chatter about causes.

What does salvage the film, and allows it to retain its classic status with some audiences, is the thoughtfulness of its casting. Whatever compromises Brooks might have made in his execution of the material, there was little he could do to sully how imposing Lancaster, Marvin, Ryan and Strode can be. The accumulated associations these men bring to their roles, and the indelible manner with which they hold the camera’s gaze, commands our attention far more than any lines they utter or any of the actions they take. Ryan’s aged features emanate a settled sense of purpose that will not evaporate no matter how tattered and torn his body might appear. Conrad Hall’s camera caresses Strode’s impressive physique with the kind of worshipful gaze that one detects, despite all the unpleasant baggage, in Leni Reifenstahl’s documentation of the Nuba. Lancaster casts aside the stiff-backed rectitude that imposed itself upon some of his contemporaneous characterisations: for example in Luchino Visconti’s The Leopard (1963) or John Frankenheimer’s Birdman of Alcatraz (1962) and Seven Days in May (1964). He resurrects some of the pep and sass that made his sociopathic protagonist in Aldrich’s Vera Cruz (1954) so compelling. And Marvin drops the gnomic stance that so suited the inner-driven, insatiable characters in John Ford’s The Man Who Shot Liberty Valance (1962) and Siegel’s The Killers (1964). He takes to command as though authority was bred in his DNA, and a sense of duty drilled into his autonomic nervous system. The Professionals comes across as a rare exception in his credits in that he emanates vehemence without simultaneously exuding some sense that only the most expert safety valve could dampen his audacity. Unsurprisingly, Brooks gives Marvin the film’s memorable last line: when Grant dubs him a “bastard” for pulling out of their agreement, Fardan responds with an undeniable insouciance: “Yes sir. In my case, an accident of birth. But you, sir, you’re a self-made man.”