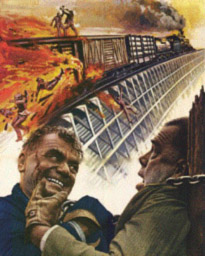 A white on black title-card reads: “1933. The height of the Great Depression.” The soundtrack of The Emperor of the North Pole opens with a song entitled “A Man and a Train” (1). Over aerial shots of a steam locomotive rolling through the Northwest, the lyrics summarise the deceivingly simple plot: a man on the run aboard a train. The movie that follows is a minimalist exploration of director Robert Aldrich’s now familiar themes: the outsider, survival in a hostile universe, life as a game, a man running from responsibility and commitment. Aldrich reduces his stylistic and thematic equations to the lowest common denominators for main characters who are by definition outsiders, homeless drifters squatting on the edges of cities and towns. The film takes place entirely along a railroad line leading through the Oregon woodlands. Aldrich severely limits the space in several of his movies: in What Ever Happened to Baby Jane? (1962), Hush… Hush, Sweet Charlotte (1964), and The Big Knife (1955) to a house; in The Longest Yard (1974), a prison; in Twilight’s Last Gleaming (1977), a missile silo and the Presidential cabinet room. Although the landscape in The Emperor of the North Pole is ostensibly as vast as the forests, it is emotionally confined to the few feet between the rails. Like the three main characters, A No. 1 (Lee Marvin), Shack (Ernest Borgnine) and Cigaret (Keith Carradine), the viewer is caught between these rails, an appropriate metaphor for the psychological stasis of the three men.

In Aldrich’s war films, Westerns, adventures, even in the sports films, there is something of consequence riding on the outcome. In The Emperor of the North Pole the entire fabric of society and its rules are distilled down to a conductor who won’t have hobos on his train and two men determined to ride it. All share one overwhelming emotion: pride. This is all the plot there ever will be: a tough conductor and the two down-and-outers, the wizened old-timer and the greenhorn, who will hop a freight just to prove a point.

The very names “Shack”, “A No. 1”, “Cigaret” mirror the figures’ truncated personas and reveal them to be as much ciphers as traditional characters. Although The Emperor of the North Pole is largely devoid of more positive emotions, being focused primarily on male pride and anger, there is a potentially positive interaction between Cigaret and A No. 1, no matter how brief or how ultimately disastrous for both. As Cigaret and A No. 1 mount Shack’s train to ride it to Portland, A No. 1’s initial antipathy turns to pity after they are both forcibly ejected from the train. Sullenly and almost silently, A No. 1 begins the arduous process of teaching Cigaret “the ropes”. In a series of shots virtually without dialogue, he demonstrates how the perplexed Cigaret should find discarded grease buckets and use their residue on the tracks. In response to Cigaret’s query as to what he is doing, A No.1 explains the obvious: “Teaching you”. When Cigaret asks, “Why?” all he can answer is “I’m still working on that”. This surrogate father-son relationship is the only positive emotional context in a film filled with challenges, brutality, pranks and an underlying rage embodied in the final fight.

Of course, in Aldrich’s universe, sentiment may be out of place in the existential struggle to survive. By the final scenes of the movie, Cigaret has returned A No. 1’s kindness with malicious recklessness, which endangers the life of his would-be mentor and causes serious injury to the railroadmen. After battling with Shack and saving Cigaret again, A No. 1’s final lesson is to throw him off the train with the simple admonishment: “Kid, you’ve got no class.” If Cigaret could have “been somebody”, where does that leave the actual “Emperor of the North Pole”? Could a victory be more hollow? He has fulfilled the demands of male pride but is alone, without a past, without a future, without companions, a brief bond ruptured and replaced by the emptiness of the Northwestern landscape.

As per the opening song, the railroad is the key metaphor. The train moves to a destination and then comes back, repeating the same trip over and over again. If these challenges to the authority of Shack are constructed like a sporting event, they lack the clarity of the contests in The Longest Yard or even … All the Marbles (1981). When Cigaret confronts A No. 1 about “Cheating”, the “Emperor” denies it: “This ain’t no game”. “The hell it ain’t”, asserts Cigaret who for all his arrogance and inexperience can grasp the obvious. This is the “game” that crowns the kings of the road and earns the railroad men their gold watches. A No. 1’s approach is epitomised by his sneer, just as Shack’s wild-eyed expressions reveal his monomania. When the two men square off on the flat car, the viewer may expect something like histrionics of a wrestling exhibition full of bluster and little real violence. In this sense, the graphic brutality of the combat is most disquieting, both for its images and for its revelation that the game is far deadlier that the players let on.

Visually, Aldrich eschews his typical high and low angles in The Emperor of the North Pole. Instead there are the naturally tilted and cramped perspectives of men wedged into undercarriages and leaning out of cabs. The overt manipulations, like the overtly antique iris effect that opens the film or the wipes and lap dissolves for transitions, reinforce the period and the sense of the film as a set piece. One of the movie’s most complex shots is a slow, point-of-view zoom when Cigaret slowly picks the figure of A No. 1 out from amidst the heap of camouflaging debris of the dump in which he sits. In that shot the viewer shares Cigaret’s discovery of how A No. 1 survives by passively blending with the environment.

As A No. 1 rides off at the end, the music sounds the refrain. Like Camus’ take on Sisyphus, the ordeal grotesquely defines existence through its repetitive, sometimes deadly but ultimately pointless scenario of survival of the fittest. “If you ever let go”, the song says, “she’ll throw you under.” (2)