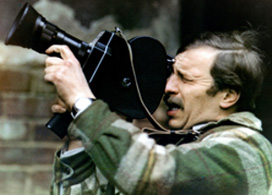 It is an article of faith that in the world of Krzysztof Kieslowski all actions must be carried out to their logical conclusions. The driver of a hearse must eventually confront death. A man who picks up a camera must eventually become a filmmaker with all the responsibilities and burdens that go along with it. Camera Buff is the film that gave Kieslowski major international attention and marks a major artistic shift in his work. He began as a documentary filmmaker, gradually moving towards socially engaged, realist fiction. His middle period, beginning with this film, still features the penetratingly observant eye of a documentarian, but takes on broader philosophical questions and is characterised by a virtuosic visual style that seamlessly combines theme and form in highly original ways. Fittingly, then, Camera Buff is a self-reflexive work on the role of the filmmaker and the nature and ethics of the medium itself.

Filip (Jerzy Stuhr) buys his first camera during his wife’s pregnancy to record the development of his daughter-to-be. He is asked to record the twentieth anniversary of his state-run company, when the managers realise that he is the only one with a camera. As he makes the film his consciousness as a director is slowly awakened. The company head enters his film into an industrial film festival, facilitating Filip’s admission into the world of cinephilia. Anna (Ewa Pokas), an attractive member of the film commission, embodies this seduction. Through connections made at the festival, Filip is encouraged to make more documentaries, and even gets one aired on television. He finds that the camera exposes truths that do not gibe with the interests of the company, the state, or even the people being filmed. Filip’s total immersion into the world of film and his burgeoning ambitions as a filmmaker begin to destroy his marriage. We know that his obsession has completely taken over when he furtively peeps at his wife’s back, through a frame made by his fingers, after she has threatened to leave him. He has begun to filter and direct even the most real of events through the process of filmmaking.

Slippage between what is real and what is filmed occurs on many levels throughout Camera Buff. Even during the making of Filip’s first, most crude film, the chronicle of the company celebration, he finds that it is no simple matter to just capture the event. At the outset he runs around with his camera filming everything that he can. He soon learns, however, that he will inevitably miss things due to circumstances beyond his control. Very early on, Filip begins to stage shots so that they capture the spirit, if not the actuality, of a scene. He shapes the world before his lens, leaving crumbs of bread on a window pane so that he can shoot pigeons on the ledge or directing employees to act naturally as they attend the celebration.

Kieslowski tells his own biography through Camera Buff. Both in approach and subject matter, Filip’s early films mirror Kieslowski’s own first documentaries. When Filip begins to educate himself as a filmmaker, he reads books which feature Kieslowski’s favourite films and directors: Ken Loach’s Kes (1969), Andrzej Wajda’s War trilogy, and scenes from Károly Makk’s films. Duplicating Kieslowski’s experience at the Lodz film school, Filip attends a screening of Krzysztof Zanussi’s Camouflage (1977), where the director, who was a professor at Lodz during Kieslowski’s time there, is present and gives a lecture on filmmaking. Kieslowski underscores these parallels between his own life and Filip’s through an unconventional editing scheme. In several instances, what seem to be objective shots are reframed or are followed by shots that reveal them to be scenes that Filip is shooting with his camera. So, it is as though Filip and Kieslowski are co-directing the film, or are, perhaps, the same person. Similarly the scene from Camouflage is cut into Camera Buff without an establishing shot or set-up, suggesting the idea that any one film is made up of all the films and life experiences of the filmmakers responsible for it, and therefore cannot have a single author.

Another more pernicious form of authorship comes in the form of censorship. Kieslowski scholar Annette Insdorf points out that many levels of officialdom censor Filip’s films. His wife stops him from making his first film of his daughter because she is naked and a girl. Later, the company officials ask him to make various changes to films based upon the political winds of the moment. Insdorf points out that all filmmakers, not just those that worked behind the Iron Curtain, must grapple with the impositions forced on their films by those paying the tab. Kieslowski’s approach to the subject is characteristically complex and thoughtful, as Filip is eventually faced with the question of self-censorship. The company director (Stefan Czyzewski) tells him that the “corruption” exposed by his last film actually has a good justification. Money meant for a frivolous, but highly visible purpose, is surreptitiously diverted for a useful one. The manager explains the issue to him as they walk on a hilltop overlooking a scene of rural contentment that could have been pulled straight out of a Brueghel painting. In this sequence, as in the works of the great painter, Kieslowski illustrates the distinct qualities of the close-up and the long shot. Should a documentarian concentrate on the million little ways in which the rules are broken or accept that these small evasions are what ultimately allow life to go on?

Filip also finds that his camera affects individuals as well as the community at large. When he insists on including a questionable segment in his televised film, it has negative consequences for one of the company’s higher ups. He makes a film that poignantly profiles the life of one of the town’s disabled workers. When Filip watches the documentary at his subject’s house, the man is overcome with emotion at seeing his life transformed into art. In another sequence, Filip is asked by a distraught friend to project a loop of film depicting his recently deceased relative. Kieslowski is not only interested in the ethics of documentary filmmaking, but also in the beauty of the cinema and in its mystical power to transcend even human mortality. For him, the process of becoming a director involves fully understanding these many facets of what Lenin called the “first art”.

Finally, Filip must weigh up the personal cost of his filmmaking. He is constantly forced to choose between his wife, Irka – played with frightening intensity by Malgorzata Zabkowska – and his newfound craft. The first shot of Camera Buff is of a black bird of prey devouring a white dove. We learn that this is a dream Irka has had just prior to being taken to hospital to give birth to their baby. The bird imagery and the idea of being consumed recur throughout the film. One is struck both by the violence with which Filip is overtaken by his cinematic obsession and by the counterbalancing hostility towards film that it creates in his wife. In a clever parody of a romantic railway station scene, Irka sees Filip off on the platform as he leaves to attend the film festival. He gets on the train and wistfully waves back at her, looking through the window as the train begins to move. Kieslowski cuts between man and wife, ending the scene with Irka screaming the words “don’t win!” at Filip who cannot hear her.

Just as his picking up the camera necessitates a new identity for Filip, their child turns Irka into the paradigm of a protective mother. She is particularly irked by Filip’s constant filming. She stops him from shooting her or the child. In a sense, she contests a male director’s control of the female image. The only other important female character in the film is the film official, Anna, who plays the opposite feminine archetype, the temptress. While one may read these portrayals as somewhat stereotypical, Kieslowski, like Irka, defies the generic formulas that go along with these typical feminine roles. Though enticing and available, Anna is a world-weary and thoughtful person, who actively hampers the possibility of an affair. Irka, on the other hand, is passionate and volatile, trying to provoke Filip and save her marriage. We see the couple make love on several occasions as Kieslowski is careful not to reduce her to the role of the harridan who prevents the husband from his aspirations.

Still, it seems that Filip must choose between family and film. He gets drunk after dropping his wife off at the hospital and we get the sense that he has been a bit of an unfocused bumbler, who has yet to take his life seriously. While we imagine that fatherhood will be the impetus for his coming of age, it is actually the camera. How to balance his personal life, a passion for film, and the preparation required to become a good director remains a nagging conundrum for Filip, as it, perhaps, was for Kieslowski too. If it does not provide a solution, this entertaining, humorous, and deeply felt film, at least, takes the question very seriously.