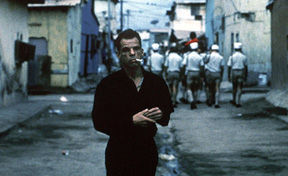 Beau travail plays out its story like the distant echo of a myth. The film is based on Herman Melville’s Billy Budd, Sailor, but the story, the narrative events, are unclear. A fractured time scale makes it difficult to follow. Motivation, even for Galoup, the protagonist who narrates his story, remains unclear. Set in a closed society, the French Foreign Legion, the film is acted out like the reflection of an ancient tale. Half naked men with beautiful bodies train on the sand, bringing to mind the Greeks camped out before the walls of Troy. The painting of Legionnaires that is the opening image of the film references cave paintings. The images and rhythm of the film pull on a collective unconscious so that out of almost nothing, everything is present. Ancient enmities based on jealousy and love, the warriors stranded in a foreign land and the agony of lost utopias are felt, if not fully understood. Distorted and refracted until it is so fragmented as to be barely coherent, the film’s narrative remains recognisable despite its almost cubist structure.

This is not a film about narrative, but about image, sound and rhythm, the way in which they create understanding beyond storytelling. Dread, desire, peace, pain, confusion and antipathy are all present in the film. Often it is hard to place exactly why such feelings engulf the viewer as a result of what they see and hear, but the feelings are disarming nevertheless. Fragments of a conversation about fishing, the scrabble of legionnaires on their elbows under low wires, the swell of music and even the absence of sound altogether seem to trigger a memory that isn’t even ours. Experiencing the film is like remembering a dream on waking; a dream that made sense so recently but now is confusing and dispersed.

Much has justly been written about the training sequences filmed lyrically and seductively by Agnès Godard. Despite the combat fatigues and the guns, these exercises seem more like the spiritual practice of martial arts than preparation for war. Indeed, all the military hardware in this film seems defunct – the deserted tanks like petrified dinosaurs at the film’s opening, the exploded helicopter just a ball of fire and a burning scrap of fuselage. It is the integrity of the military unit that matters here, not any outward reason for the unit’s existence.

As in martial arts, strict hierarchy and respect, bordering on religious obedience, is the centre of Galoup’s experience of the Foreign Legion. The Legion is a closed society, a monastery of fighting monks. The tenuousness of its military reason, the storming of hollow buildings, the building of roads to nowhere and the digging of empty holes, is held at bay by the rigour and beauty of its ritual. These rituals make the Legion an entire way of life, incandescent with strange beauty. Life in the legion in complete, time is filled, bodies are used to their limit. One can understand how seductive such a world could be, and how without it Galoup feels stranded in Marseilles – “unfit for life”. In such a closed world the story, an archetypical triangle, is primed to take place. The tragedy is waiting to happen. Galoup, Sentain and Forrestier are just three out of many who, over time and through space, wear these particular masks and act out this ancient dance.

Sentain, the new recruit and catalyst of Galoup’s disaster, has a face that is always mask-like. The Legion is Galoup’s paradise but like all paradises, his world is fragile. At times it is impossible to understand what it is about Sentain that Galoup is so threatened by. Even he can’t explain it. He describes seeing him at first, a thin young man, and thinking, “There’s no place for people like him in the Legion” but he never manages to explain why. Perhaps it isn’t really anything to do with Sentain – if it weren’t him it would have been another who set into action the course of events. In a mesmerising dawn sequence, the conclusion of a strange night in the city, we see the Legionnaires, who at night looked so out of place, little boys in their shorts and bare legs, processing down the street fluid and relaxed. On their shoulders they hold a black Legionnaire, his skin glowing dark and beautiful like a pagan god. But then they pause, and exchange him for Sentain, who is now carried, king like, on the shoulders of others. Galoup talks of seeing him: “They held above them one of their own”. But actually, they held two. In such a fragile paradise, it could be anyone that tips the balance – it’s the tipping of it that matters.

When he watches Galoup is dressed, as he is periodically throughout the film, in black. These clothes play no part in the story Galoup narrates; his fall from grace from the Legion. Neither does it seem part of his life in Marseille. Galoup’s clothes, military and civilian are always immaculately presented, but none come close to the elegance of these black clothes. When he wears them he is full of mystery. As he wanders the streets at dawn, looking at the procession, he swings on a lamppost like a character in a musical beginning to break into dance. He seems strangely at ease, though his voice over narration suggests the opposite. Later, in the same clothes, he performs the extraordinary dance that closes the film. The final images of Galoup in Marseille – the gun in his hand, the pulse in his arm – suggest a suicide. But it would be wrong in a film such as Beau travail to take anything so literally, and to then extrapolate that the figure in black is Galoup’s ghost. Nevertheless, implications of ghostliness are certainly present.

As a ghost Galoup reaches the conclusion of his life as an outsider. Despite the tenacity with which he clings to the Legion, he is never really a part of it. He belongs to no group, he does not socialise with the soldiers he trains or with Forestier, the man he worships. Galoup understands his isolation. There is pathos and longing in the phrase “They held above them one of their own”, for he knows he can never be one of “their own” himself. He is a lost soul in Marseille, and a lost soul in black on the streets of Djibouti. The more he tries to belong within the Legion, the less he seems a part of it. When he drills the soldiers at press-ups he joins them, adding a little leap between each press-up to prove that he is fitter, stronger than they. But even though he is fitter and stronger he does not have their smooth skin, their glowing youth or their incandescent beauty. Galoup’s tragedy is always within him. Sentain is just the tool by which it is transferred from the inside to the outside of the body.

Galoup is not the only outsider in this film that began as a meditation on the idea of foreignness. The Legion itself is a foreign imposition on the African country. Seemingly disparate scenes of African life – a crowded train, a woman selling mats, the dancing girls at the disco – remind us constantly of colonial imposition. Scenes at roadblocks where African police let through the French soldiers emphasise this. In a world exclusively made up of men, the position of woman is examined constantly. It is a group of women who watch the soldier storming the deserted building, and laugh. Images of the soldiers hanging washing are followed by one of Rahel, Galoup’s girlfriend, hanging up washing while Galoup sweetly tries to help. Hanging the washing is women’s work (in Dreyer’s Ordet, 1955, the washing on the line is the symbol of a woman’s presence in the house) and these juxtapositions emphasise the way the world of this film consists of a series of insiders and outsiders.

Indeed, it is, after the painting of the legionnaires, an African woman – a woman who plays no part in the plot – who opens the film, kissing at the camera in the disco. The disco also concludes the film; now empty of all but one, as Galoup performs the extraordinary dance that seals the film’s ending. Beyond anything in the film, this frantic explosion of movement makes no linear sense. But this doesn’t matter. This film doesn’t have to be understood. In doesn’t have to be understood to be understood. The film must be read on the level at which it gives itself to the audience, a languorous mystery, suspenseful, unexplained – a film that is almost entirely sensual. Is the dance real? Is Galoup a ghost? These things are not important. What matters is the power of the dance, free, wild and mad, yet dignified, bursting out between moments of restrained cool as he smokes his cigarette. All the scenes in the disco are shot via mirrors and one can never be entirely certain what is reflection and what is not. At one point we see the dancers via a wall of diamond mirror tiles that looks at first as though they dance through a wire fence, penned in. Galoup’s world is similarly hard to read; what happened, what he imagined, what he felt, what he saw. At times it is as fragile as a glass bauble. In Marseille he tries to reconstruct his shattered world. But his reconstruction remains fragmented and strange, like the mirrors in the disco – where one looks in or out of a kind of prison. Such double vision, such mixtures of memory, fantasy and observation, such a mirror-ball like creation of worlds of desire and mystery are at the centre of Beau travail. One leaves the film uncertain of much, but never of its unsettling and hypnotic power.