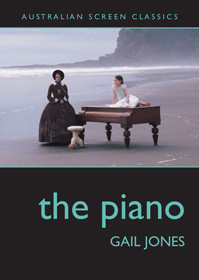 Research into female authorship in the cinema was a neglected area in cinema studies until the 1990s (1). Since then, there has been an increased interest in women auteurs, largely generated by women writers and scholars (2). Not the least of these auteurs is Jane Campion, whose work has inspired numerous books (3). Contributing to scholarship on women filmmakers – and Campion in particular – are two new publications: Kathleen McHugh’s Jane Campion, and Gail Jones’ The Piano. Both are thoughtful and passionate encounters with Campion’s work and make worthy contributions to Campion scholarship. McHugh has undertaken the mammoth task of surveying Campion’s entire oeuvre, while Jones has focused on Campion’s much written-about and celebrated film, The Piano (1993).

Gail Jones’ book, The Piano, is part of the important “Australian Screen Classics” monograph series published by Currency Press – although I note that this film’s Australianness (or not) is not a feature of the discussion. While a national cinema is also global, readers might expect Australia to be an issue for this series, and in particular, for this film: a transnational production of contested origin, given both New Zealand and Australia claim it as their own (4). However, Australia is rarely mentioned in the text. This issue of “Australianness” is of particular importance and interest to the Australian film industry and its scholars at this point in time because of the significant changes proposed to the way films are funded in Australia. The May 2007 federal government budget proposed a new system where in order to gain a 40% rebate, feature films will need to pass an “Australianness test” – something that has not yet been defined, and will most likely significantly shape the kind of films our industry makes in the future (5).

The Australian Screen Classics series and, indeed, Jones’ book offer sustained critical writing on a selected classic Australian film. This latest title and the series are edited by Jane Mills, a Senior Research Associate at the Australian Film Television and Radio School (AFTRS). Importantly, Mills introduces the series with definitions of screen culture and its value (something she has previously discussed in more detail in Metro [6]). The series hopes to “re-introduce Australians to their own screen history and broaden their knowledge of screen culture” (7). Mills is a champion of screen culture and, like her writers, has a love of cinema (a love Jones also conveys). Mills defines the great importance of screen culture to appreciating our national cinema and its significance to sustaining a vibrant industry:

This series is a part of screen culture which is the glue needed to stick these forces together. It’s the plankton in the moving image food chain that feeds the imagination of our filmmakers and our audiences. It’s what makes sense of the opinions, memories, responses, knowledge and exchange of ideas about film (Introduction to Australian Screen Classics series, Jones, p. v).

Jones’ book makes a significant contribution to the study of our screen culture and fulfils its aim of addressing “the physical quirkiness of The Piano” (p. 4) and examining the film’s “emotional appeal” (p. 5). She brings her readers to an understanding of the power of the film in stimulating the senses, and its effect on audiences – in particular, how this is constructed through the film itself. Jones achieves what Sue Gillett also did in her book on Campion (in another significant book and series on Australian cinema, “The Moving Image” [8]). Expressing the sensuousness Campion achieves in a scene bathed in sumptuous orange light, Jones writes:

Ada comes to Stewart at night and begins slowly to touch his prone, half-asleep body. Pulling back his trousers, she strokes his buttocks and inserts her hand between his thighs. It is a dreamy scene, full of gentle possibility. Ada…[offers] Stewart a lesson in responsiveness, an erotics of silence and the pleasure of investigative touch. But Stewart recoils, his expression one of confusion and disgust. It is a moment in which their relationship might have been reconstructed, but the sexual agency of the heroine meets no understanding. (pp. 48-49)

Similarly, Gillett had previously observed the harmonic quality of a scene at the end of Campion’s film Sweetie (1989), where, after a long period in which they have been estranged, Kay and Louis

re-ignite their sexual relationship…From a shot of entwined and exploring feet in socks we cut to a medium shot of Kay’s relaxed body reclining on the bed. She is wearing a plain cotton singlet. Her soft and satisfied smile, the first we’ve seen, is the intimate concluding image we have of her. As an image of sexual fulfilment this is interesting for its gentleness, domesticity and utter lack of sexualisation. The camera asks us to see her happiness. (9)

Jones discusses the significant issue of Campion and feminism, and is also interested in the feminisation that Campion achieves in her cinema – from abject images of muddy, fluid and feminised landscape; the female point-of-view; the female gaze; and female silence. She pinpoints the feminisation of vision, the way Campion centres female desire and perspective – for example, when she notes the following (which can be illuminatingly compared with the above quotations):

Typically one knows to the point of exhaustion the tedious repertoire of cinematic sex: throbbing thighs, gasping women, Vaseline smeared fantasy, a head thrown back in clichéd ecstasy. In Campion’s version – and I believe it to be a then unprecedented moment in popular cinema – the woman is pleasured first. Baines opens Ada’s jacket, but instead of the usual codes of ravishment, dives beneath her hooped skirt to give oral pleasure. (p. 52)

While this is a book about only one of Campion’s films, it is useful in thinking about all of her oeuvre; certainly there are clear links to Campion’s other films. For example, I am reminded by Jones’ discussion of The Piano of many preoccupations also in Campion’s most recent feature In The Cut (2003): a duality of language; the wittiness of language; decapitated or mutilated women; the confounding nature of language or knowledge; and links to Alfred Hitchcock – the latter two, Hitchcock and language, also noted by McHugh. McHugh further notes Campion’s interest in “the importance of women’s work, their creative expression, and of sexual desire as a powerful, necessary, and compelling threat to that expression” (p. 18), and that in Peel (1982), we see “the filmmaker’s ongoing and focused exploration of the relationship between spoken or written words and moving images” (p. 31). In conclusion, a reader interested in any of Campion’s films will find Jones’ book insightful. 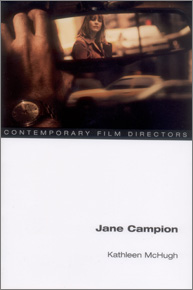 McHugh’s book – part of the University of Illinois Press’ Contemporary Film Directors series – is an ambitious project which attempts an overview of Campion’s entire oeuvre (in only 154 pages) and broadly succeeds in its aim of tracing the “themes, their timeliness, and their relation to Campion’s specific background and historical moment, throughout her work” (p. 2). It begins with a focus on Campion’s biography and moves chronologically through each film. At the end of the book there are three interviews with Campion that have all have been published previously. There is no rationale offered for this selection but they come from different eras in her career: 1989, 2000, and 2003 (10).

A great strength of McHugh’s book is the illuminating and evocative descriptions of the films themselves. The effect on the reader is twofold: it makes one want to watch the films again, and it provides insights into the way in which films are constructed in terms of craft. McHugh demonstrates a strong background that bridges both theory and production. It is sometimes frustrating that more detail or footnoting seems warranted – no doubt one of the costs of trying to cover so much in so little space – so sometimes the layperson will be left to do some more research (not a bad thing), or one might be left wondering. I quite like the lateral tangents but it is a bit frustrating to have many pages about Frida Kahlo and Joseph Beuys so early in the book. While the exploration of these artists as seminal influences is interesting, I didn’t really feel convinced about their significance to Campion’s cinema, or why they should get such prominence over other noted influences – particularly cinematic ones, such as Lina Wertmüller, Luis Buñuel or Peter Weir (11).

Writing outside the culture (McHugh is American) means there are some errors in McHugh’s book that someone writing within Australia would most likely not make, such as a reference to the television show Countdown as a “soap opera” (p. 26) (12), or the incorrect listing of Campion’s After Hours (1984) as being made by the “Women’s film Unit of Film Australia” (p. 164). While both the Australian Film Commission (AFC) and Film Australia were involved in this production, Film Australia never had a Women’s Film Unit (13). There is also another error that numerous other scholars have made, which thus far has gone uncorrected: the television studio production Mishaps of Seduction and Conquest was a student video produced in 1984, not 1981 (14). This has some importance not just for correcting the inaccuracy, but because of the chronological way in which the book is written, referencing Mishaps as a precursor to other films which it actually followed. The reader would need to keep this in mind when thinking about some chronological comparisons made between Campion’s films: for example, page 47 refers to “desire, ice, and burning…that reappears in A Girl’s Own Story”, which was actually made earlier (in 1983).

Despite some minor concerns, such as the above, and a feeling that the discussion of the features is much stronger than the shorts, McHugh’s book is full of interesting observations – for example, that in many of Campion’s narratives “inadequately disciplined adults treat children as peers, conduits, and translators, siphoning off erotic and aggressive energy through them” (p. 29). McHugh reveals how Campion used her own research, tracing the sources of various imagery or ideas, such as the ideas of scholars William H. Gass and Alfred Habegger in relation to understanding the human manipulation studied in The Portrait of a Lady (1996), or the cut-out animation in The Piano, which is based on children’s books from the period of European settlement. McHugh gives examples that I think illustrate that Campion is often misread; for instance, when she outlines that Campion “does not presume to tell their [the Maori’s] story” in The Piano, McHugh effectively offers an explanation of what is at work (or not) in a complex representation for which some critics or scholars have criticised Campion’s film as racist (15). In her analysis of The Piano, Jones is also concerned with the Maori, taking up important issues such as a fascinating discussion of the representations of Maori in the film, particularly from a postcolonial perspective.

Both these books have an interest in, and offer a detailed approach to what Jones refers to as, “cinematic consciousness” (p. 3): an interest in what we see and hear, specifically the cinematography, mise en scène and sound. Their lateral explorations open up varied research directions (such as Jones’ outline of the types of pianos shipped to New Zealand). Both are engaged, clever, thoughtful, passionate and interesting books about Jane Campion. There are also a few laughs, such as when one encounters a review of The Piano by Stanley Kauffmann – someone who clearly dislikes Campion’s films (as evidenced by his rage at what he regards as Harvey Keitel’s emasculation in Holy Smoke! [1999] [16]). Regarding The Piano, Kauffman writes:

“I haven’t seen a sillier film about a woman and her piano since John Huston’s The Unforgiven (1960) in which Lillian Gish had her piano carried out into the front yard so she could play Mozart to pacify attacking Indians.” (Jones, p. 5)

Somehow I don’t think Campion would mind being lumped in with the likes of John Huston and Lillian Gish!