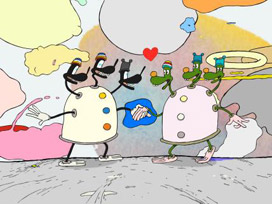 At this point the Melbourne International Animation Festival (MIAF) is the most prominent screen forum for animation in the country, having arguably supplanted even the competitive programs at Sydney, St Kilda, and the Melbourne International film festivals. Despite the considerable cachet and lucrative cash prizes that those festivals can provide, I am surprised (tho’ in non-partisan fashion: I honestly don’t mind who provides us the opportunity to view them) that instead MIAF should be premiering works like Marv Newland’s Tête à tête à tête (Canada, 2005) or Felix Dufour-Laperrière’s Un deux trois crepuscule (One Two Three Twilight, Canada, 2006) to Australian audiences: two rare gems of contemporary cinema, and any programmer would be justifiably proud to make their inclusion.

It’s probably noteworthy that both these works screened from new 35mm prints. Film, whether 35 or 16mm, remains markedly superior to tape formats in a theatrical context. Irrespective of whether a work is actually shot to film, or produced digitally, for screening purposes film provides a richness of colour tone and saturation, a contrast range, a sharpness and depth of detail that other formats barely approximate. The lesson should be clear: if you’re actually going to devote a considerable time and labour to a work of animation, then for chrissake finish the damn thing on film! …anything less will do your vision an unnecessary injustice. While this situation may well change into the future, for the immediate moment there is simply no realistic alternative: works on tape look fine on a monitor, but seem compromised and half-wrought on a cinema screen (a qualification: canny animators who must for whatever reason finish on tape will produce precisely those works that are well served by the format. Keep everything in motion, give your textures a mathematical regularity – however complex – and the spectator’s eye simply won’t have time to make an accounting of any deficiencies in the projected image.).

On the other hand, a work like In My Day (Dave Jones, Australia, 2005) capitalises on these deficiencies to its advantage, visualising its wayback schoolday anecdotes through a stark brut/infantilist style. These stick figure characterisations are hardly accidental; the work was undertaken during a residency at the Natimuk Primary School, and the students provide a charmingly diminished rendering of their elders’ narrated memories of their own school experiences. This visual economy is all too rare among digital animation, but when applied to the service of congenially cheeky oral history it clearly engages audiences better than many more refined exercises in vector animation.

Newland’s latest work essays a different kind of infantilism; working now in 35mm scope and (finally!) enjoying the patronage of the National Film Board of Canada, a far remove from his Bambi Meets Godzilla of 1969. Within Canadian animation his work has always been at complete variance to the often twee and mannered, tho’ lavishly funded, animations supported by the NFBC. He is probably the most accomplished and intelligent Canadian animator of recent decades; few of his peers (Sally Cruickshank, back in the USA, is one) have matched him in adapting the ethos and stylistic experiment of ’60s underground comics to animation. Among other things, his Sing, Beast, Sing (Canada, 1980) is a mocking parody of Michael Snow-style structuralist cinema – framing its listless japery within a relentless back-and-forth tracking manoeuvre, and succeeding on every level. In typical Newland style, Tête à tête à tête is essentially a colourful character-driven gag cartoon, but distinguished as ever by a near-complete mastery of the form, and its playful absurdism. Triple headed protagonist suffers a disorienting lack of consensus, but all is seemingly set right before the concluding frame. Special mention must be made of the sound design, which applies some hilariously stylised audio effects to the earnestly dissenting heads. 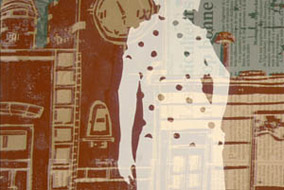 The second uncharacteristic Canadian animation was Felix Dufour-Laperrière’s Un deux trois crepuscule; likewise screening from a gorgeous 35mm print through the generous support of the NFBC (I rather suspect that the attention accorded to Ryan Larkin in the last year has alerted the Canadians to the plaudits with which a more creative use of the form can be rewarded). To be honest, I’m a little confounded that such a fine work should be marginalised within the single screening of the Abstract Panorama program. Even though it enjoys a sophisticated graphic style, elaborated through digital compositing, Dufour-Laperrière’s film is hardly abstract – the narrative may be elusive and poetically rendered, but it’s clearly linear and essentially devoted to a central character. That Dufour-Laperrière should treat so sensitively with a female subject is also a considerable achievement; I was honestly surprised to see the male credit, let alone as sole artisanal creator. The sound design by Olivier Calvert, and music of Charles Cotvin, was stunning not only for its considered discretion, and the occasional violence that punctuated it, but for being among the most assured applications of a spatial 5.1 mix that I’ve ever heard. Dufour-Laperrière’s film describes the possibilities of a new variety of cinematic narrative, albeit one which acknowledges fine art precedent (like the framing device of the ersatz Cornell boxes), and employs the potential of new digital technologies to its full creative advantage. Not least for its gender sensibility, this film would find very good company in a screening with works by local mediaworkers like Pia Borg and Van Sowerwine.

Un deux trois crepuscule’s peers in the Abstract Panorama program were a much lesser bunch, and suggest that MIAF programmers might lack for confidence in approaching more experimental work. Pedestrian scratch animations, by-numbers software demos, and predictably geometric vector-based work – none of which would bear comparison with several dozen works produced in Australia over the last two years. The program notes for the Masters of Abstraction program, of historical work, acknowledge the assistance of Pip Chodorov (founder of the Frameworks on-line forum, now devoted to the running of Light Cone and Re:Voir in Paris); why not ask Chodorov to curate a program of contemporary abstract works? Or, why not survey an Australian practice that might actually be superior?

Another kind of failure was suggested by the diminutive audience for the Abstract Panorama program – that MIAF and ACMI were unable to mobilise the many people who are avidly interested in precisely this kind of work speaks to a failure of marketing. The reluctance of our peak institutions of screen culture – of which MIAF and ACMI are evidently two – to engage with experimental work is symptomatic of a broader lack of both imagination and application. If MIAF actively chooses to include more creative works in the future, they need to do a much better job in selecting the works, and bringing them to an appropriate audience.

This year’s MIAF provided a number of indications that the Festival is conscious of the rich history of animation. Alongside the Masters of Abstraction, a retrospective explored the work of Canadian animator, Frederic Back. Elsewhere, the launch of The Great Australian Animation Project announced an ambitious intention to survey a history of locally produced work – a commendable initiative, and one that deserves of every support. A tremendous wealth of material awaits restoration to our scrutiny, and I happily anticipate the outcome of this project. As suggested in the MIAF program notes, the project could well spawn a Festival in its right; however, I wonder whether the same isn’t also, and already, true of contemporary experimental work? 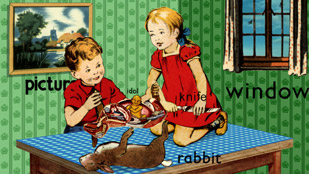 Significantly, many of the most distinguished international works (including even Newland’s, produced for the Showpeace series), were produced with support of national broadcasters. The UK’s Channel 4, and Arte France, are funding a range of sophisticated works that celebrate their national screen cultures to the world at precisely such forums as MIAF (presumably, at least some of these works will be licensed by the SBS for broadcast here). There is a challenge here for local broadcasters and funding agencies, to pursue and maintain their own initiatives in this regard with a renewed vigour. Typical of these works is Sucre (Sugar, Gael Brisou, France, 2006), with its ravishing colour and elegantly sensual line sustaining a fluid motion that delicately captured the grace and awkwardness of its dual protagonists. From the UK: Beasty (Susi Wilkinson, UK, 2005) loopily explores the limits of physical reality in its story of bullying avenged, and Rabbit (UK, 2005), by the tremendous Run Wrake, finds perverse glee in an inspired re-imagining of Gregory Higham’s illustrations for “Dick and Jane” school readers.

MIAF’s multiple instances of childhood nostalgia and infantile regression do, however, speak to a larger trend in contemporary Western culture. Our media seems to suffer precisely that inability to account for concrete facts of material circumstance that Michael Haneke elsewhere identified in Caché (France, 2005).

Symptomatic is a work like El cieclo enfadado (The Upset Sky, Irene Iborra and David Gauthier, Spain, 2005), which suggests that affronted clouds will bring a halt to military adventurism. Oh yeah? The demonstrated reality is more likely that climate shifts will blight us all… The fact that this work won enthusiastic cheers and applause just seems like further evidence of this phenomenon, a head-in-the-sand refusal to acknowledge our own complicity in the geo-politic, and adopt appropriate positions of adult responsibility.

Among student works, I enjoyed Todd Kurtzman’s Cal Arts graduate work, Say When (USA, 2005), which embellishes its free-fall silhouettes with a mordant twist. Susanne Richter’s Lohwald (With No Name, Germany, 2005) falters a little and bears visible debts to Jan Svankmajer and Zbigniew Rybczinski, but also contains some striking imagery and enjoys an accomplished electroacoustic score.

The continued success of the Festival is very much to the credit of MIAF Director, Malcolm Turner. This year’s program extravagantly assembled a fine collection of international shorts, with a survey of graduate works from a number of overseas schools, a national survey of Korean work and a program from Estonia’s Nukufilm studio, alongside the retrospectives, a program of work by festival guest, Rosto, and programs of animated documentaries, and expressly for audiences of children and the deaf. In fact, the scope of the MIAF program may be one of its problems; sometimes I couldn’t avoid the feeling that the curatorial ambition simply wasn’t matched by the quality of the work being screened – the difference between the merely average, and the actually good, can be enormous. This was the universal complaint among every MIAF attendee I spoke to, and at some point Festival organisers probably need to give a thought to the endurance threshold of their patrons. With 33 separate programs, the sheer weight of material must defeat the dedication of even the most avid enthusiast. The seven international programs contain an awful lot of filler – material that is batting well above its league but in company of better-realised, more imaginative works. While acknowledging that most of the work screened has something to commend it, a Russian Roulette approach to film programming demands a leaden bum of auditors, and I doubt if many people actually have the stamina to submit themselves to this much animation. A surfeit of work, of variable quality, might even be working against the festival; numbers seemed to be down this year, and viewer fatigue might provide one explanation. A more concentrated curatorial approach would address both this problem, and my qualms about the treatment of experimental works – as well as supporting the more sophisticated marketing that the festival needs to employ in the future in order to generate audience numbers to justify what is, in all other respects, its frankly breathtaking scale.