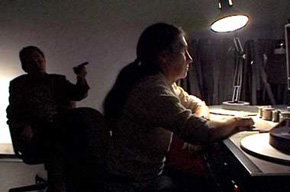 “Put an amen to it. There’s no more time for praying.” That is a line of dialogue from the famous burial scene in John Ford’s The Searchers (1956), quoted by Tim Cawkwell in his article, “Perfect Storm, Imperfect Death”, and featured in this Issue. Among other things, in discussing the burial-at-sea sequence in The Long Voyage Home (1940), Cawkwell evokes beautifully the full poetic power of these ritual moments in Ford’s cinema. Ford was a master of burials and tombstone soliloquies, as with Lincoln at the graveside of Ann Rutledge in Young Mr. Lincoln (1939), to take one example from the countless. Ford was also a filmmaker much loved by Jean-Marie Straub and Danièle Huillet. It was, therefore, with sadness that we heard of Danièle Huillet (1936-2006) recently passing away. The last image we have of her was from Pedro Costa’s documentary on the Straubs, Où gît votre sourire enfoui? (2000), as she sits at the editing suite diligently working on the montage to their film, Sicilia! (Sicily!, 1998), forever alive to the precision accorded a sound and image. Unfortunately, there was little time to organise tributes to her for the content to this Issue. Fortunately, we can refer readers to Tag Gallagher’s mercurial essay, “Lacrimae Rerum Materialized”, featured in Issue 37 of Senses, which discusses the innovative nature of the Straubs’ cinema at its best. Huillet deserves the full majesty of a Fordian burial.

Cinema related exhibitions/installations seem to be the order of the day. In the previous issue, we covered the Jean-Luc Godard exhibition that took place in Paris. This time round we cover the recent “Erice-Kiarostami: Correspondences” exhibition, housed sequentially at the Centre de Cultura Contemporània de Barcelona (February-May 2006) and La Casa Encendida in Madrid (July-September 2006), and subsequently to feature at the Centre Georges Pompidou in Paris in 2007. Linda Ehrlich’s extended review-essay looks at the elective affinities between these two sublime filmmakers.

Also of note in this issue is regular contributor Carloss James Chamberlin’s excellent piece on legendary Soviet director Dziga Vertov. Wherever possible, this journal tries to feature articles that challenge the orthodoxy that surrounds a given filmmaker and Chamberlin’s article certainly accomplishes that.

In a case of pure serendipity, we were grateful to have received at the very last moment the interview with Bill Morrison that accompanies Ursula Böser’s detailed analysis of The Film of Her. Our thanks to Max Le Cain for his diligence in getting the manuscript to us under such a pressing deadline.

As a Special Feature to this issue, we include a selection of papers in advance of the The XIIIth Biennial Conference of the Film & History Association of Australia and New Zealand to be held in Melbourne on 16-19 November 2006. We gratefully acknowledge the work of the Conference’s organizers, Adrian Danks, Deb Verhoeven and Deane Williams, and, in particular, Constantine Verevis for his liaison work with our journal.

In passing, we make mention of two honours that have come our way of late. First, The Times in London for selecting Senses with inclusion in its list of the top five film journals on the web, as featured in the 12 August 2006 edition. Second, Encyclopædia Britannica has recently informed us that it has created links to selected Senses articles on its iGuide site for web readers. Both are a tribute to our contributors.

Our thanks go to Nadine Whitney and Kama C. Way for their sterling work on and around this issue.