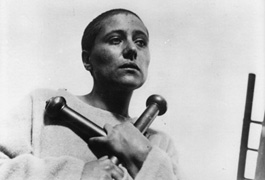 Carl Dreyer called La Passion de Jeanne d’Arc “a hymn to the triumph of the soul over life”. On the one hand, his un-cosmetic, documentary-like fidelity to the record and the period is legendary – he said he wanted to give “the impression of watching reality through a keyhole”. On the other hand, the film’s stunning close-ups and expressionistic, even surreal set designs take us beyond the merely material and into the spiritual realm in a manner superior to that achieved by more recent CGI effects. Since Descartes, the spiritual has never seemed quite real to most Western intellectuals, so it is slightly disturbing to be taken into the medieval point of view by Dreyer’s film. Perhaps this is one reason Dreyer disliked having his film considered a work of the avant-garde or art-house and wanted it to be distributed to the masses. What Dreyer shows us in La Passion de Jeanne d’Arc is exactly what we have lost sight of – “realised mysticism”, a label he himself attached to the film upon its German release. In keeping with this, Dreyer’s major films work on two levels, as Ole Storm points out in his introduction to Dreyer’s Four Screenplays:

The outer world rests, to all appearances, in harmony: everything in the actual picture has the dense, existential texture, the intimate, familiar quality, of a domestic scene by Chardin. What takes place, however, within the domestic setting is fantastic, and, as the action develops, gradually becomes unaccountable to reason. (1)

Completely rejecting the typical, Western division between the natural and the supernatural, Dreyer shows us a world where God is incarnate in the ordinary and where spiritual transcendence occurs in the face of oppressive religiosity.

Born in Copenhagen in 1889 to a Swedish mother who died in childbirth, Carl Theodor Dreyer was adopted by a Danish family and given a strict puritan education. Going to work for the Nordisk Films Kompagni in 1912, he was engaged on many film projects as a writer of titles and scenarios, made his directorial debut, Præsidenten, in 1919, and followed it in the same year with Blade af Satans Bog (Leaves From Satan’s Book). After the success of his seventh film, Master of the House (1925), he was invited to France where he made his first widely acknowledged masterpiece – La Passion de Jeanne d’Arc, one of the last great silent films. Of his subsequent work, Vampyr (1932), his first sound film, is a cult vampire movie that shows the strong influence of German expressionism, while Vredens Dag (Day of Wrath, 1943) and Ordet (The Word, 1955) fully realise his vision of incarnate transcendence. His last completed film, Gertrud (1964), is about an aging diva who wishes life was more like an opera. In 1948, Dreyer began planning a film about the life of Christ, and he was still working on it at the time of his death in 1968. Much later, Lars Von Trier brought another of Dreyer’s screenplays to the screen with Medea (1987), even wearing Dreyer’s tuxedo to Cannes in a symbolic expression of artistic allegiance.

In La Passion de Jeanne d’Arc, Dreyer’s unique vision is already fully realised. In contrast to even the best silent films by other directors, Dreyer’s actors perform with a natural realism that completely breaks with the vaudeville/theatrical tradition. This is because Dreyer felt strongly that, “In all art, human beings are the decisive thing. It is people that we want to see and it is their adventures of the spirit that we want to follow.” (2) In contrast to the cliché-ridden embodiment of types seen in most films of the era, he gives us the mystery of irreducible humanity.

This same dedication to realism is adhered to in all of his films; his characters, settings and stories are never swallowed up in mere symbolism. Although they may represent particular attitudes and values, his characters are first and foremost, themselves. However Dreyer is not satisfied with naturalism because his realism has a broader scope. He writes, “Realism in itself is not art; it is only psychological and spiritual realism that is so” (3). As the grotesque faces of her judges crowd around her, it is clear that Jeanne is looking past them to something beyond their comprehension, something even more real than her very real persecutors. Dreyer doesn’t explain away her visions as psychological, as mere madness, nor does he give us fantastical special effects which, after all, merely serve to fictionalise the angelic realm. What Jeanne is seeing is too actual, too real, too “there” for any of these options. As her judges attempt to ridicule her by bringing the spiritual down to the level of the merely material (even vulgar) and the merely rational, she maintains her faith in her transcendent vision.

Traditionally, and even still today, close-ups are commonly reserved for significant moments of high drama, but in La Passion de Jeanne d’Arc, Dreyer stridently ignores this rule, overwhelming us with cruel, smug and ugly faces. When these shots are combined with unusual, quick cuts, it is sometimes difficult to tell where the characters are in relationship to one another (which along with the stark, bare walls gives the film the disjointed, relentless and oppressive qualities of a nightmare). Although these faces are frightening, one can also see their fear and desperation. After the suppression (or rather extermination) of the Cathars (1229-1321), the power struggles of the Avignon Papacy (1308-1378), the papal schism (1378-1416), and the then recent burning of John Hus (1415), they are desperate to hold on to their positions of authority in the face of Jeanne’s personal (and thus Protestant) vision. This helps explain the rather shocking scene in which a porcine priest spits on her face as he screams “Blasphemy!”

In Dreyer’s films, faith in God and the supernatural is never ridiculed, explained away or reduced to psychology. It is always a faith that is well placed, as the completely interwoven realms of the spiritual and the material are equally present and real in Dreyer’s work. Although a rationalistic, disembodied, formal, institutionalised Christianity is always shown to be a source of evil, genuine faith is never dismissed or even questioned. It is the division of the flesh from the spirit that is always the object of Dreyer’s criticism. Dreyer is a “severe, uncompromising critic of organized religiosity” (4), but he is also an inspired champion of the truly spiritual. As film scholar Raymond Carney points out, “The expressions of the senses and the spirit are never separated or opposed in Dreyer’s work as they are in traditional Christianity. For Dreyer, our bodies are the way we express our spirits” (5).