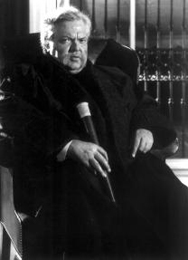 It is difficult to look at Orson Welles’ two films of the second half of the 1960s without feeling a chill of death. They are distinctly melancholy works, often mute and reserved in their delivery. Without the wider circulation of tantalisingly unfinished works like The Other Side of the Wind (a seemingly dazzling, almost experimental take on the film industry), one can get the sense in each of these films of a filmmaker who might be controlling the ‘full’ mechanism of film for the last time, who is self-consciously aware of the need to capture the melancholy wistfulness and gravity of this moment as a kind of last testament. Although time, memory and mortality often preoccupy Welles’ films they take on a more metaphysical, sombre and deeply felt form in Chimes at Midnight (1966) and The Immortal Story. His two subsequent completed films, F for Fake (1975) and Filming Othello (1978), have the sense more of playful and experimental autobiography, flirting with the questions of authenticity, adaptation and authorship as well as the essayistic technique of collage.

Welles was only in his early 50s when he made The Immortal Story for French television, but it appears as an almost too perfect summary of his career; a metaphorical tale of impotence, memory, power and mortality made on a tiny budget in Europe it both chases its own tail and is a deeply felt film of melancholy mood and sensibility. The film has the quality of a miniature; short in length and minimalist in design. It also appears depopulated, as if the product of a fragmented dream or imagination. Based on a short story by Isak Dinesen (Karen Blixen), The Immortal Story is a film of both embellishment and small detail, an intricate tale which relies upon the interlacing of experiences and memories (the adaptation of Dinesen’s story resonates throughout the film, itself a tale of adaptation and corporeal embellishment). It is also a very concentrated and studied work that relies on the intensity of several of its dialogue sequences (especially the long, circular scene between Jeanne Moreau’s Virginie and Roger Coggio’s Levinsky). The film has a somnambulistic quality, beautifully rendered and intricately told, it is a world-weary work preoccupied with the exhaustion of narrative, storytelling and even the world itself. It is perhaps the most stately and reserved of Welles’ films, the clipped piano music by Erik Satie giving it a feeling and sensibility closer in tone to Stanley Kubrick’s Barry Lyndon (1975) than The Magnificent Ambersons (it is more a chamber or solo composition that an orchestral work).

As is typical of many of Welles’ films, The Immortal Story is both modernist and archaic in technique. Several scenes are remarkable for the ways in which they fragment space, where editing is ruled by the matching of gesture rather than to create a coherent sense of time and action (in these moments the fragmentary editing scheme resembles that in Othello [1952], a style determined by both aesthetics and economics). Similar qualities can be found in both the lighting and sound of the film. At times the film deploys naturalistic lighting regimes, while at others it is dominated by either bleached-out or deeply hued tones (particularly of burnt orange). As is true of all of Welles’ post-synched soundtracks, sound seems to emerge from both inside and outside the world of the film. Thus, the seamless movement from what appears to be voiceover narration to the roughly lip-synched dialogue of a character (Fernando Rey) early in the film is typical of the manner in which the film self-consciously plays with the processes of cinematic storytelling and technique.

Many have read the corpulent character of Clay played by Welles as a metaphor for the director himself; seemingly able to control the world around him he ends up as a hollow shell who succumbs to the prophesy he wants to both own and destroy (basically an apocryphal sailor’s yarn). Like many of Welles’ characters his failure is one of true imagination, unsatisfied by the tales he spins and the facts he commands, Clay attempts to will an immaterial and multivalent world into being. Welles’ films are often preoccupied with both the execution and failure of power, its ability to destroy the thing which it wishes to capture, represent and control. Of course this can be taken as a metaphor for the cinema and the manner in which it represents and tries to stand in for the stories and world which surround it (and Clay is nothing other than a director-figure whose attempts to bring to life an apocryphal fiction are stymied by both the power of the life of the actors he uses and the fiction he tries to make real). Nevertheless, this is amongst the most joyless and least physical of all Welles’ performances, his visual presence in the film often limited to the vision of him presiding over events in his high-backed chair. For Welles there is often nothing more than the story itself, its power here is to take over the lives of the characters, to obliterate them and their free will rather than to make the fiction come to life. This is a film that proceeds like a ritual, adding to a story that engulfs it.

Welles’ cinema has often been called both Proustian and Borgesian, the finding of a link or key to the director’s work in 20th century literature itself revealing. The link to Proust can be seen in the way that each of the characters is haunted and motivated by the past, jolted into remembrance by a gesture, an action or object. It can also been seen in the crystalline and forking manner in which the film represents time; the film is precisely linear but characters act within a haze of memory, barely surfacing motivations and vaguely familiar story-lines and characterisations (Deleuze would call it Bergsonian). The film can be considered Borgesian in the sense that it deals with the powers of simulation and representation, the ability of imagination and fabrication to subsume the world which is their foundation.

The ending of The Immortal Story is amongst the most beautiful and self-contained in all of Welles’ cinema. On the completion of his ‘play’ Clay dies, exhausted and engulfed by the fiction he has ‘created’. His death is registered by his dropping of the shell that the sailor has just given him, a symbol, I guess, of both the world he can no longer venture into and the string of displaced echoes and simulations that dominate the film. On wearily noting Clay’s demise, Levinsky picks the shell up and holds it to his ear, intoning the words which brilliantly summarise the labyrinthine and self-fulfilling nature of the film, and the story it has told, as the frame is engulfed by light: “I’ve already heard it all… a long, long time ago. But where was it?” (at this point we almost seem to be in the cinema of Resnais). In a cinema that is often ruled by perfect metaphors and allegories (the young and old Kane/Welles, the story of the scorpion in Mr. Arkadin [1955], etc.) the shell at the end of The Immortal Story can be made to stand in for the Chinese-box like nature of the Wellesian universe; a hall of mirrors, overlapping tales and appropriations which endlessly echo and turn in on themselves. In some of Welles’ films this final gesture can seem like a conceit or an escape, a failure to truly confront the moral dilemmas and questions that the film has introduced, but in The Immortal Story such preoccupations with the self-generating nature of storytelling are the subject of the film itself. At the end of this elusive film the characters seem wasted by the roles that they have played and which now seem to have come to an end (as all stories must, even immortal ones). They become a story to be heard and echoed from deep within a shell, perhaps no more.