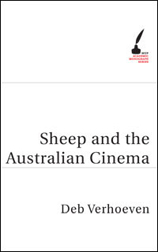 Some readers will have encountered portions of Deb Verhoeven’s book scattered through time and across the publishing landscape, in the form of several short essays that have appeared in various journals during the past ten years or more. If you followed the slow gathering of the entire text you would have observed it maturing and cohering; you would have noted first how Verhoeven’s sheep story commenced with pun-laced, polemical verve full of linguistic plays on tales and tails, shaggy dog stories, things heard and in herds; you would have watched the author then moving on to enjoy the associative unruliness of her speculations; in the later years you would have seen a fully integrated, re-polished argument settle into elegance. Some might say it’s bad form to grow one’s mind in public like this, but the slow evolution of Sheep and the Australian Cinema was never a progression from amateur to professional status, apprentice to master, or some such bildungsroman. Rather, it grew as a carefully considered, regular and stimulant call to communal discourse, offering ideas that invited responses, not ideas that were ill-shaped or unready. In that continuing engagement with a community of scholars and enthusiasts, a text has emerged that serves, challenges and is pertinent to its persistent, evolving community.

I’ve started this review by recounting the publication’s prehistory in order to remind ourselves that books are not just objects pumped out in obedience to industrial and actuarial schedules. Also, they are organs of communication, of mental growth, emotional intensification, and sociability. And as such, books need to be nurtured within environments that particularly suit them rather than stunt or mutate them.

Which prompts my first point of praise in this review. Sheep and the Australian Cinema is a book that has been assembled at the right, investigative pace and with the right community progressively assembled around it, for it, by it.

My second point is that it’s one of the first books that Melbourne University Publishing has used for pioneering its books-on-demand program, whereby you can pay to download chapters as PDF documents or you can pay the company to print and send an elegant hard-copy book (whose minimalist design harks back to the great Gallimard series of the 1960s, I’m pleased to say). In a publishing economy that often refuses to invest in something that hasn’t already been prefigured by something else identical, it’s important that MUP is trying to find ways to allow slow-burn and word-of-mouth projects to make their way into a business that must never be all business.

So, what is this particular, slow-burn text? Identifying and tracking the trope of sheep as they appear and re-appear throughout ten decades of Australian cinema, Verhoeven runs a revealing “sectional cut” through Australian culture specifically and through capitalist-colonial and supremacist cultures generally. The motif of the sheep is shown to be a leitmotif that grants us insights into theories of national definition, racial purity, industrial efficiency, white might as right, wildness and security. By tracing the consistencies and modifications of the sheep motif through a century of local use, Verhoeven produces an essay which twists and turns surprisingly without ever abandoning its intellectual rigour and rhetorical focus.

Apart from developing an understanding of the economy of pastoralism upon which Australian culture has been founded, Verhoeven also uses the sheep motif to take us inventively into analyses of other economies, best termed “psychological” and “libidinal”. She helps us see how Australian culture is steeped in barely acknowledged presumptions about what is human and what is animal, about subjects’ dignity and objects’ profitability, about good and evil, about the sacred and the profane, about the clean and the impure, about Australian and unAustralian. (Verhoeven’s historical perspectives help us understand that if you live in Australia, you should pray or demand that you occupy the first position in each of these defining dyads! Or better still, work for the elimination of their brutal power.)

Reading Verhoeven’s detailed analyses from The Squatter’s Daughter (Ken G. Hall, 1933) and Bitter Springs (Ralph Smart, 1950) all the way through to the Babe films (Chris Noonan, 1995 and George Miller, 1998) and beyond, one finds oneself taken beguilingly into deep, difficult and occasionally dark areas of historical and sociological analysis. The analysis is especially impressive in the Bitter Springs chapter, which is a deft meditation on cultures of contradiction and denial. Exposing the paradoxes of desecration-and-redemption at play in colonialism, the chapter examines the insufficiencies of any official culture of “assimilation” in any colonial circumstance. Bitter Springs is shown to be a text ripe for deconstructive criticism insofar as it exposes its own impossible desires and restless contradictions. We learn how it’s a settler film that never settles. Which is a simple enough statement, but a very complex phenomenon. The Bitter Springs chapter is an exciting addition to (and innovation on) important studies of Australian colonialism, studies that help us understand Australia as a culture yearning naively for innocence and “riven” by the ineffectiveness of its attempts to forget or dismiss the violence that founded it. I am thinking here of important texts by William Routt as well as Tim Rowse and Eric Michaels (1).

Mixed into the racism, the landgrabbing and quick settlement that initiated modern Australian culture, there is often a sense of hysteria that manifests in texts that try to dramatise these themes. Verhoeven tracks this syndrome. Especially savvy is her examination of the semantic “excess” that sheep so often release in The Squatter’s Daughter. Particularly impressive is the run of formalist criticism with which Verhoeven reveals the dizzying set of half-ideas and desires that the director Ken G. Hall sloshes into a sequence where “Barky parts the fleece” and the film then spits out a bewildering montage to reveal a gumleaf band behind the sliding doors of a plush ballroom deep in the heartland of Australia’s moneyed establishment. Rather than dismissing this delirious sequence as “bad” or “naïve” artistry, Verhoeven is able to ride the vertigo of its moral and semantic turbulence, thereby taking us closer to many of the unconscionable and rarely exposed precepts behind our colonial economies.

And to make sure we don’t take shelter in the complacent belief that these paradoxes once defined our quaint past but not our oh-so-sophisticated present, Verhoeven shows in her meditations on more recent films like Babe and Babe: Pig in the City that many (if not all) of the sheepish themes still run through Australian culture as it gets hauled into globalism and fundamentalism.

This is a book that will garner attention in cultural studies and film studies circles. Which it deserves. But I wish it would also be savoured more generally, by people who enjoy good writing. As I was reading Verhoeven’s book, I was struck by its wit and its momentum. Then it dawned on me: as well as being scholarly in a way that leads it straight into university libraries, it’s also writerly in a way that should take it to bookshops, literary festivals and radio programs. After a week or so scratching the itch of recognition that it started in me, I realised that Verhoeven’s book is rather like Elizabeth David’s or Margaret Visser’s writing. Starting as they do from a constrained focus – such as regional cooking or the history of culinary ingredients – such books help you learn about an array of startling topics. They run with ideas that flare out from the main line of argument. In the best sense, they’re in the tradition of “fugitive writing”, always moving along, keeping track of where they are, ever vigilant, but also nimble and shifty, unafraid to take flight out into the environs even as the main road of argument is kept in view. Such writing is ready to startle itself, to try out the world, to see what actuality has in store for us, even if it’s not what we predict or prefer.

That’s what it is: essay writing. Verhoeven’s book is good essay writing. It’s attentive to the craft and evocative urges in rhythms and vocabularies. And we could do with more of its kind. In our academies, websites and bookstores.