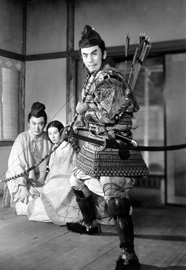 In his audio commentary for the recent Criterion release of Ozu Yasujiro’s Tokyo Monogatari (Tokyo Story) (1953), David Desser notes that because Ozu’s films are almost all set at the moment of their production (that is, situated resolutely in the present), they can now be considered “documentaries of Japanese life (which capture) the flavour of their time” (1). By contrast, eight of the 12 films that make up the final phase of Mizoguchi Kenji’s career (from 1950 when he converted to Buddhism, until his death in 1956) would, being jidai geki (period films), seem to be better suited to shedding light on the past. Indeed, this is doubly so given that Mizoguchi was always scrupulous in adhering to the realities of the era in which any given film was set, not simply costumes and design but also the mores and conventions, the available gender positions and social relationships.

However, several of these films can also be read indirectly as “documentaries of Japanese life”. And paramount in this regard is Mizoguchi’s penultimate film, Shin Heike Monogatari, one of a number of Japanese films to explore Japanese national identity through the unstable identity of a real-life historical character (see Inagaki’s Samurai Trilogy, 1954/55/56, Imamura’s Eijanaika, 1981, or Kurosawa’s Kagemusha, 1980, and Ran, 1985). In fact, the film is, generically, a samurai film, a genre that was just reaching a peak of popularity and production at this time, and which was, as Desser has noted, fulfilling a “perceived cultural need” (2).

The historical epoch depicted in the film, that of the Heian era (794 to 1185 A.D.), has been called “[o]ne of the most important in the cultural history of Japan” (3). Perhaps the chief reason for such a bold assertion is that it was during this ultimately turbulent time that the main tenets of subsequent Japanese culture and governance emerged (for example, the rule of the Bakufu, or Shogunate, as a military government which was to last until 1868, was a direct result of the battle between the Taira and Minamoto families that climaxed this era). With regard to Mizoguchi’s film, though, it is the particular state of Japan in the latter decades of this period that are of most note, as it is here that one finds several situations rife with connotative potential as they pertain to the time of the film’s production in 1955.

Shin Heike Monogatari, a reasonably rare film among Mizoguchi’s late period works in not being centrally concerned with the social situation of victimised women figures (though this is peripherally present), dramatises an incident in the life of future Taira clan head, Kiyomori. He discovers that instead of being the son of a samurai as he had always thought to be the case, he may in fact be the son of either the current emperor or a monk. The three factions to which the young protagonist could be linked are those that are in conflict throughout the film, and each can be seen to represent a specific position: the monasteries and warrior monks emblematise the degeneration of institutionalised religion into politically-motivated violence and the oppression of the people; the Imperial court crystallise notions of (perceived) rightful rule and the self-preservation of authority; the samurai embody honour and individual integrity.

Given a possible blood-link with any of these positions, Kiyomori enters into a figurative no-man’s land, a state of uncertain identity in having no group, no collective, against which to define himself (the family and the group remains a concrete foundation of Japanese society). Presented as an objective correlative to this central dilemma is the case of Kiyomori’s mother. Her lack of a stable identity is underlined by the fact that she is never named throughout the film (the character is credited simply as “Kiyomori’s mother”), and the crisis she undergoes sheds particular light on that of Kiyomori by virtue of being diametrically opposed to his: whereas her son is torn between feelings and emotions that are thrust onto him and essentially beyond his control, and eventually takes the path of defining himself in terms of real spiritual and familial heritage by honouring his samurai lineage, she is concerned only with her own well-being and status, her superficial sense of self.

The relevance of such a scenario to mid-1950s Japan is manifold. Firstly, the forces of antagonism in the film are markedly anti-democratic (the monasteries and Imperial Court both wish to impose themselves politically and control the masses), a theme common to many films of the 1950s. Following the occupation period, democracy came to be widely regarded by the Japanese as the true way forward for the nation, and the government had swiftly banned anything transgressing this, even songs.

Kiyomori’s victory is, then, one of family, democratic idealism and altruistic action over elitism and the corruption of those in power. This chimes with Japan’s attempt in the post-war period to reinvent itself as a nation, to put its recent indiscretions behind it, move forward and open itself to the international community (something that would climax in the highly symbolic 1964 Olympic Games in Tokyo). In other words, the trajectory of Kiyomori in overcoming a crisis in his identity and finding his true self amid social chaos, is a microcosm for Japan as a whole in the 1950s, caught between itself and its traditions on the one hand and the Western values fostered by the occupying SCAP forces on the other.

This is the situation explored in the film. Indeed, it is made clear from the very beginning: the opening shot – a virtuoso mobile long take of the kind for which Mizoguchi has long been celebrated (and criticised – see Noël Burch (4)) – details peasants bemoaning the state of the nation. The most prominent complaint is that Japan has two rulers, two courts: the official Imperial court and the cloistered court exerting influence from behind the scenes through the puppet emperor.

As outlined above, Japan in the 1950s was similarly felt to be  enslaved to two masters (the most explicit of the aforementioned banned songs was by a Tokyo vaudeville performer and contained the line “everybody is talking about democracy. But how can we have democracy with two emperors.” (5)) Furthermore, it was thought that Douglas MacArthur was ruling Japan from behind the scenes, with Emperor Hirohito placed, as Ian Buruma suggests, as “[a] symbolic presence… to legitimise his own authority” (6).

The portrait of Japanese society offered by Shin Heike Monogatari is thus directly relevant to Japan in the 1950s. Kiyomori’s decision to remain true to his samurai heritage, his past, becomes emblematic, perhaps cathartic, for a country trying to retain its essence and sense of self amid impositions from outside and, like Kiyomori, trying to ascertain exactly where its allegiances should lie. And the path chosen by his mother represents the superficial road to immediate material gain but spiritual loss. In 1955, this was as much a documentary on Japanese life as Ozu’s dramas of extended family breakdown.