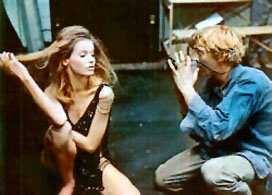 Swinging London in the mid-1960s was the last place you might expect to find an onscreen discussion of the ontology of the photographic image or musings on the very nature of human perception. Nor was London, whose contemporary style was typified by the daily and very public passagiato of Carnaby Street, The Rolling Stones and That Was the Week that Was, likely to be the setting for a film that would call into question the very nature of sight and memory as well as skewering the common posturings of that decade. Yet Michelangelo Antonioni’s Blowup is a film that resonates today and is still capable of raising questions about the epistemology of the Cinema, while coldly recording a period that seems, in retrospect, so very fantastical.

Antonioni’s career as a cinematic chronicler of Northern Italian middle class urban ennui was already established by the early 1960s. With L’Avventura (1960), which won the Special Jury Award at Cannes and Il Deserto Rosso (1964), a chronicle of empty life in a modern Northern Italian industrial wasteland, he revealed a unique aesthetic and a cold eye for human pretension and a certain emptiness at the heart of the contemporary city. Indeed, Antonioni seems to call into question the celebrated wonders of modernity itself in a way that seemed to echo the concerns Jacques Tati had explored so comically in Mon Oncle (1958): namely whether modern life, particularly in a city infatuated with the New, was worth the aggravation.

All of which suggests that perhaps Antonioni was more than a little aware of Heisenberg’s Uncertainty Principle (1927) which claims that any observed happening (however neutral or scientific the act of observation) is altered by the mere presence of the observer. Observation is thus never a neutral or abstract process. Certainly if there is a central informing principle to the narrative matrix of Blowup it is this: that no phenomenon is pure unto itself – especially when human emotions come into play, let alone consideration like guilt, obsession and, finally, fear.

The film commences with a fast moving introduction to the very stylish world of a hot fashion photographer, Thomas, played by that emblematic ’60s actor, David Hemmings. This is the world made notorious by magazines like Tatler and Queen as well as all the tabloids of the world, all Pucci fashion, dolly birds (Jane Birkin made her name in this film), drugs, fast cars and rock-and-roll.

As for those actual ’60s photographers Terence Donovan and David Bailey, from whom Thomas’ character seems in part constructed, this is the historical moment when the photographer/model association became an object of public worship. Thomas is surrounded by a fog of available chicks and big money. Trendy London lies at his feet. Antonioni, like Federico Fellini in La Dolce Vita (1960), was clearly out to peel back the decadence to show the abyss beneath – all dazzlingly brought to life with the aid of Carlo Di Palma’s jazzy cinematography.

The movie then goes into overdrive as Thomas sees something (or maybe not) while photographing in a London park. The swinging world recedes as Thomas becomes morbidly obsessed by the possibility he has in fact photographed a murder. Is that a body under the bushes? If not, what, then? The title’s meaning becomes clear as Thomas repeatedly enlarges, studies, and reworks his negatives to locate the proof for something, any evidence of a possible occurrence that seems, as his obsession grows, to become increasingly elusive. Subsequently, the film becomes, in part, a meditation on the very nature of reality and how we deform the natural with interpretations and inflexions.

Unlike a more conventional thriller (as Blowup sometimes appears) the film offers no cosy or pat solution – we never know, nor can Thomas tell, whether there was a murder, or if all that occurs is a product of a fevered mind in an overheated big city?

Antonioni was to move on to further filmic evocations of the events of the 1960s and beyond, notably with his extraordinary psychedelic take on American dreams and the tune-in, drop-out generation in Zabriskie Point (1970). But never again, nor as elegantly, would he capture and convey so well that strangeness at the heart of reality itself, nor the sense that, by the end of the decade the world had shifted on its philosophical axis forever.

Almost 20 years later, the American stylist Brian De Palma paid an oblique tribute to the Italian master with his film Blow Out (1981). In this elegant (and paranoid) thriller, Jack (John Travolta), a movie sound man, is recording some spot effects late at night and witnesses (and tapes) the sound of a car crash involving a prominent senator. Jack, too, like Thomas in Blowup, obsesses over what he has recorded. Overall, Blow Out is a less metaphysical and more generically constructed tale of conspiracy: it’s classically a 1970s movie in that respect. In Blow Out all the plot loose ends are finally tied up. But Blowup stays much longer in the mind, perhaps because of Antonioni’s resistance to narrative closure.

Throughout Blow Out and Blowup there is always a sense in which recording media themselves are seen as, somehow, treacherous. Antonioni’s Blowup forcefully reminds us that even the latest technologies can mislead or betray us. In the computer age, it this remaining element of ontological uncertainty that still troubles the human observer – for we are not, quite yet, masters of information (1).