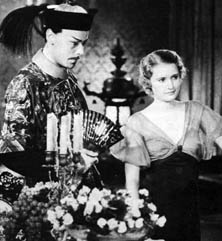 I was telling the story of the crucifixion to a group of Mongolian bandits. I thought I was really getting to them. They kept moving closer and closer and they seemed so intent. A few days later, a group of travellers were captured in the desert by these bandits – they crucified them. I had misunderstood their reaction to my story. That, my friends, is the nature of Chinamen.

– dialogue from The Bitter Tea of General Yen

There isn’t a General Yen or Megan Davis, but just you and me.

The Bitter Tea of General Yen seemed doomed to disgrace from the day of its release. Despite having the honour of being the first film to premiere at Radio City Music Hall, it was a resounding flop that altered the course of the career of its ambitious young director. Back then, audiences could not accept a film that showed a Chinese man and a white woman achieving unprecedented levels of intimacy. Today, audiences may regard the white characters’ stereotypical denunciations of Chinese culture, or the interracial love story with the Chinese romantic lead played by a Swedish actor in yellowface makeup, with either camp irreverence or a queasy sense of shame for Hollywood’s racist legacy. It is a film orphaned between historical and cultural norms.

I think the film’s failure to find a home within a prevailing social convention was what made me fall in love with it – at the time I was struggling to leave my Chinese family and live with my white girlfriend, whom I would eventually marry. The film’s ambivalent view of Christian missionaries in China fascinated me; my wife and I both served as missionaries in China, and some of the film’s unflattering commentary on Christian hubris in attempting to alleviate the world’s suffering made a lot of sense to me. But it was really the mysterious love between General Yen and Megan Davis that lingered – the way it was predicated as much on private fantasies, assumptions and miscommunications as it was on genuine understanding. Now that my wife and I have separated, the tragic series of miscues between the two lovers seem all the more poignant.

Divorced interracial couples were perhaps not the target audience that director Frank Capra and producer Walter Wanger had in mind, but they couldn’t have asked for a worse reception than what they had back in 1933. According to Barbara Stanwyck,

The women’s clubs came out very strongly against it, because the white woman was in love with the yellow man and kissed his hand. So what! I was so shocked [by the reaction]. It never occurred to me, and I don’t think it occurred to Mr. Capra when we were doing it. (1)

As a result of the film’s failure, Capra was relegated to more modestly budgeted screwball comedies, upon which he would build his reputation. (His second non-comic big-budget endeavor of the 30s, Lost Horizon, 1937, also fared poorly.)

One can only wonder what kind of career Capra would have had if this film had been a hit, because in both its style and treatment of cultural and sexual clashes, the film stands arguably as Capra’s most complex film. Visually the film is stunning, thanks largely to Capra’s longstanding cameraman, the unsung Joseph Walker, who achieves remarkable effects in the glinting, filigreed manner of Sternberg’s films from the same era (Walker’s gift for gauzy atmosphere also comes through in Hawks’ Only Angels Have Wings, 1939, and Welles’ The Lady from Shanghai, 1948).

The film’s stylistic merits are easy enough for everyone to accept; what’s harder to accept, for viewers now as well as back then, is the film’s contentious views on both Chinese and Christian American culture and the possibility of love and understanding between them. The film’s attempts to appeal to its contemporary audience – the frequent aspersions towards Chinese culture, the exoticisation of China as an exciting, lawless wasteland where life is cheap and morals are scarce, and the casting of a Caucasian actor as the Chinese lead in accordance with Production Code taboos – are enough to compel today’s culturally sensitive viewers to write the film off, as many have. And yet these concessions to the demands of its era still weren’t enough – the mere suggestion of erotic love between a Chinaman and a white woman was enough to keep audiences away in droves.

For those who are willing to plough beyond these surface reactions, what’s left is a film that weaves an elaborate web out of competing cultural perceptions, social and religious values, and sexual desires. Megan Davis (Stanwyck), a newly married New England missionary, has her honeymoon postponed when her husband (Gavin Gordon) sets out to save an orphanage in a town under the siege of General Yen (Nils Asther). After pleading the General for passage to the orphanage, they receive permission in the form of a note written by the General: “This fool prefers civil war to the loving arms of his bride.” It is the first of several clashes between the two cultural poles constructed by the film, a blue-eyed American idealism versus cynical Chinese pragmatism. During the dramatic and violent rescue the wife is knocked unconscious and is then retrieved by the General. He then holds her in forced custody, mocking her husband for wasting his time saving “ancestorless brats” instead of tending to his wife. Davis wakes up to gunshots and witnesses prisoners being executed without trial; when she protests to the General, he responds that they have no food to feed prisoners; “Surely it is more humane to kill them quickly than let them starve”.

One could fault the film for making such a stark, unflattering depiction of Chinese ethics. But what runs counter to these broad characterisations of cultures is the depiction of mutual attraction between the two leads, one of both hidden desires and agendas. It is never clear whether the General experiences genuine attraction for Davis, or if it is purely a matter of conquest. General Yen’s vocal disdain for Davis’ culture may lead one to think that he has no real respect for her, but he treats her with uncommon deference.

The film continues battering away at the contradictory impulses of Western Orientalism; as the film progresses, it becomes evident that Christian morality is under equal fire for its own naivete and hypocrisy in embracing other peoples and cultures. This becomes evident when Davis makes an eloquent plea to save Mah-Li (Toshia Mori), a sweet-faced girl captured for spying against the General. The missionary’s argument for the transcendent power of unconditional love moves the General to release Mah-Li (though he holds Davis as her substitute). In the zeal of her missionary sermon, Davis proclaims that all of them are of one blood – upon which the General touches her for the first time, hand on hand, and asks, “Do you really mean that?” Davis retracts her hand impulsively – and surely enough, Mah-Li betrays both of them, passing information that leads to a total rout of Yen’s army and his own undoing.

What follows is a remarkable, nearly wordless sequence, the most purely cinematic passage in all of Capra’s career. General Yen accepts his fate with an eerie calm, while Davis is clearly devastated at the fact that her Christian ethos had led to the undoing of the man she sought to save. Virtually alone, they await the consequences; in the final scenes, the camera haunts the empty chambers of the defeated general and his now-sympathetic captive, and the only sound, the ringing of a small bell, accentuates the feeling of vaunted longing and impending doom. Davis puts on an exquisite bridal dress reserved by the General for his future bride – possibly offering herself sexually to him. But General Yen drinks his poisoned tea, leaving Davis to hold him tenderly, kissing his hand as he dies.

In a strange irony, General Yen’s ruin is a reaffirmation of the Christian ethos – his act of mercy towards his enemy was his moment of salvation, transcending the fatal consequences. It also happens to link General Yen with heroes in later Capra films, like Mr. Deeds, Mr. Smith and George Bailey – individuals driven to the point of insanity or suicide for upholding their selfless, humanist ideals. What’s also ironic is that the events leading to General Yen’s martyrdom are what drive Megan Davis to doubt her own cultural values and even her faith.

The film’s subversion of Western values is still insufficient for contemporary film scholars, especially those critical of the institutional racism of Hollywood production that persists today. Floyd Cheung and David Palumbo-Liu have purposefully argued how, by having General Yen kill himself even as Davis seems to offer herself, the film effectively “contains” the Asian male within a socially (read: sexually) unthreatening space (2). They go on to identify this same containment strategy in contemporary Hollywood films such as the Chow Yun-fat vehicle The Replacement Killers (1998), arguing that effectively nothing has changed in Hollywood representations of interracial sex. Though to be fair, this same problem can be seen elsewhere, most notably in the Australian feature Japanese Story (2003), a film I find particularly frustrating because fundamentally it’s so damn safe, so respectful of the Other culture so as to leave it lingering at an inscrutable distance, rather than to venture a connection, offensive or otherwise.

This is what I find to be of such value in The Bitter Tea of General Yen; that it risks offence for the sake of constructing a dialogue, one fraught with so many perils in the realms of politics, religion, cultures and sex, that it would not be worth it if it weren’t necessary. Despite the social prejudices that informed its production, it dared to carve out a space where two people might live not as Chinese and American, heathen and Christian, man and woman, but just “you and me” – while reckoning soberly with the impossibility of achieving such a space. Whatever faults it may have, its daring puts contemporary films of similar subject matter to shame.