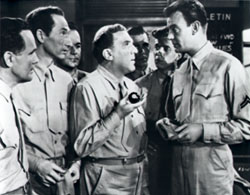 When a career possesses the kind of longevity experienced by Allan Dwan (1885-1981) – nearly 50 years at the helm of some 800 releases – it comes as no surprise that he encountered both accolades as well as obstacles during its duration. Canadian-born and a graduate of Notre Dame, where he majored in electrical engineering and prospered on the football field, Dwan joined the Essanay Studios in 1909 and completed his last feature, The Most Dangerous Man, in 1958. During the silent period, he worked with such prominent performers as Lillian Gish (An Innocent Magdalene, 1916), Mary Pickford (A Girl of Yesterday, 1915), Gloria Swanson (Manhandled, 1924, and Stagestruck, 1925) and on several occasions with Douglas Fairbanks (Manhattan Madness, 1916, Robin Hood, 1921, and The Iron Mask, 1929).

Later, with the advent of sound, Dwan fell victim to unpropitious circumstances that in turn led to a protracted relationship with the B-echelon studio owned by Herbert J. Yates, Republic Pictures. Dwan consequently spent a portion of 1945-1954 bolstering the flimsy talents of Yates’ paramour, Vera Hruba Ralston, one of the more dubious “stars” of the period and someone who could gainfully compete with Maria Montez in the ineptitude sweepstakes. Dwan may not have been forced to elicit her less than commanding response to Erich von Stroheim’s stern request for a giggly saw in The Lady and the Monster (George Sherman, 1944), but did nonetheless have to endow some veneer of competence to Ralston’s impersonation of a gambler (Belle La Grand, 1951) and an Air Force Lt. (The Wild Blue Yonder, 1951).

Dwan weathered such demands upon his patience and professionalism, as he did earlier forays into the ridiculous, including encounters with second-string wiseacres the Ritz Brothers (The Three Musketeers and The Gorilla, both 1939), and even managed to dilute the treacle associated with America’s favorite moppet, Shirley Temple, on more than one occasion (Heidi, 1937, Rebecca of Sunnybrook Farm, 1938, and Young People, 1940). Through high points and hellholes, Dwan retained a remarkable equanimity and undiluted commitment to the rewards of no-frills, pretension-free storytelling. As David Thomson remarks, “Dwan’s liking for visual narrative proved stronger than all the foolish corners he was forced to occupy. His flexibility was proof of imaginative cheerfulness.” (1)

One of Dwan’s more satisfying associations paired him with the independent producer Edward Small. It led to four breathlessly paced and economically conveyed farces: Up in Mabel’s Room (1944), Abroad with Two Yanks, Brewster’s Millions (1945) and Getting Gertie’s Garter (1945). Shop-worn and old-fashioned as these properties might have been, Dwan resuscitated their narrative and comedic conventions with a seemingly effortless polish and panache whereas a lesser talent would have succumbed to frenzy and overkill. The director characterised the quartet to interviewer Peter Bogdanovich as a predetermined set of diversions for battle-weary military personnel:

My main concern for doing all those farces was because I knew they’d be seen by a lot of kids at war, and in may cases in army camps – and they’d cheer them up. The whole series was made with them in mind. I didn’t give a damn what the people who brought tickets saw or liked. I was thinking about those kids. And they loved them. And, of course, people at home would enjoy them because they were light. So they were very big hits. And even did well in Europe. (2)

James Agee gave this body of work a left-handed compliment when he characterised Up In Mabel’s Room as being “as horrible, and wonderful, as watching a Gopher Prairie dramatic club play a mail-order farce (6 m. 6 f.)” (3). With the passage of time, Brewster’s Millions most likely shows the least wear and tear, though as a group the films remain commendably well-paced, attractively acted and governed with a firm hand against going too over-the-top. The narrative gambit in Brewster’s Millions, of a young man being forced to spend a million dollars without apparent logic or explicit calculation in order eventually to receive a seven million dollar inheritance, possesses an undeniable ingenuity and leads to a covey of cockeyed complications. The crack supporting cast (Eddie “Rochester” Anderson, Mischa Auer and June Havoc) more than adequately bolster the satisfying romantic leads (Dennis O’Keefe and Helen Walker). Dwan knew he had a sure-fire piece of business, and keeps the pace manic but never metronomic as the concatenated sequence of impositions ensue that threaten to block Brewster’s eventual success.

The protagonists of Abroad With Two Yanks come from the film’s projected military audience rather than the sphere of domestic life. The film opens with the following quatrain, which sets the mood and the scene.

Competitive protagonists Biff Kowalski (William Bendix) and Jeff Reardon (Dennis O’Keefe, who would star in all four of these films) vie for the affections of local lass Joyce Stewart (Helen Walker). Initially unaware that her childhood acquaintance Cyril (John Loder) pines for her, too, Biff eventually sides with the Australian in order to detour his fellow countryman’s amorous intentions.

The cross-dressing alluded to in the film’s title occurs only in the last third of the plot following a brief sequence in which Biff, Jeff and other American combatants don dresses and put on a show. Jeff all of a sudden escapes the theatre in order to offer an engagement ring to Joyce before Cyril makes his intentions known. The expected gags regarding the burly leads flouncing about in feminine attire ensue, though Dwan keeps the pace sufficiently ratcheted that the expected clichés acquire a modicum of freshness. O’Keefe and Bendix, both known for memorable appearances in notable examples of the noir canon, exhibit exuberant comedic skills, with the latter in particular playing intriguingly against the grain of the brutal, psychotic characters he took on in The Glass Key (Stuart Heisler, 1942) and The Blue Dahlia (George Marshall, 1946).

Dwan employs skill cross-cutting and deploys a number of elegantly inserted crane shots in order to avoid the kind of monotonous master-shots that often sink the efforts of other knockabout comedies of the period, such as many if not most of the Abbott and Costello vehicles or the even more budget-conscious Poverty Row programmers. Furthermore, while one would unsuccessfully attempt to root out a thematic subtext to Abroad With Two Yanks, a seemingly deliberate insertion of the phenomenon of doubleness complicates the lightweight plot. Aside from the obvious matter of cross-dressing, Biff proves to be quite a literate lug, as he is introduced quoting from Edgar Allan Poe. Jeff, on the other hand, seems taken over by his amorous intentions and, therefore, becomes judged as schizophrenic. Dwan also employs a number of frames within frames that draw attention to the performative nature of the material. Aside from the earlier mentioned stage show, important exchanges between Biff and Jeff occur in a combination greenhouse/aviary at the Stuart residence. A jail cell features in a similar manner, as does a chamber of horrors at the Stuarts during the course of the final sequence. Typical of Dwan, the use of these environments within environments do not draw attention to themselves, as his technique, here and elsewhere, tends to the self-effacing.

Abroad With Two Yanks may in the long run come across as yet another period-specific service farce, better engineered than most and more competently staged than, say, Abbott and Costello’s Buck Privates (Arthur Lubin, 1941). At the same time, the picture incontrovertibly demonstrates Dwan’s commitment both to his material and his audience, illustrating a career-long conviction that giving the public a good time without pretension to any larger significance than the pure act of storytelling remains a commendable, and too often ill-handled, enterprise.