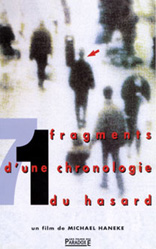 Michael Haneke is one of the most important and vital filmmakers in world cinema today. Since he first came to widespread critical prominence and notoriety with Funny Games (1997), he has been both lauded and reviled as a sensational, pessimistic purveyor of contemporary alienation in the industrialised, media-driven First World; someone in many ways akin to a Michelangelo Antonioni (a director Haneke greatly admires) for the 21st century.

Whether his work is seen as nihilistic and misanthropic or as a profound, existential analysis of the malaise of modern capitalist society and culture, there can be little argument that Haneke’s films are powerful, disturbing and, right now with the world as it is, vital. Mark Cousins has talked of Haneke’s style and thematic as representative of “[a]mbitious 1990s cinema” (1). But his oeuvre before Funny Games‘ diatribe against violence as entertainment has so far gone largely un-examined, receiving little (if any) serious critical attention, even though the seeds of his most famous and acclaimed films are clearly present in Haneke’s work from his feature debut The Seventh Continent (1989).

No other film in the Haneke canon deserves (re)discovery and analysis as much as 71 Fragments of a Chronology of Chance (it is, outside of his adaptation of Kafka’s The Castle [1997], the director’s most obscure title, being unavailable for home viewing on video or DVD and rarely screened theatrically; it was also virtually ignored on its initial release). Formally and conceptually, the film is one of the most challenging narrative works of the 1990s. It depicts snapshots in the drab, anaesthetised lives of a myriad of all too real and recognisable characters, to whom one is not introduced in any conventional sense: there is no exposition, one doesn’t even learn the names of many of the characters, and this underlines the fact that they are representative beings; they are or can be anyone or everyone in contemporary society.

The short vignettes of their lives are also all observed with a dispassionate, often static camera that reflects the static, stationary lives of the characters. The camera almost always remains detached and objective, keeping the viewer at a figurative distance from the diegesis and inviting us not to identify with the protagonists (in the Hitchcock sense), but, rather, to analyse and reflect upon them and their actions. We are never encouraged to look down on the characters or condemn them, if we did we would be condemning ourselves. In this sense, Haneke’s film is a mirror; we are asked to sympathetically consider the plight of these characters, their flaws and shortcomings, so that they may illuminate our own.

Crucially, though, like other filmmakers who imposed formal and stylistic limitations on their work (most obviously Ozu Yasujiro, Hou Hsiao-hsien or Chantal Akerman’s early films), there remains the possibility of creative deviation from the strictures imposed generally on the film. Here – as in The Seventh Continent, in which point-of-view shots were almost exclusively reserved for the young girls of the family who commit suicide together – there is a distinctive overhead tracking shot that occurs twice in the film: at the very beginning when the young boy later identified as a runaway orphan first escapes to the city (wading through a river and looking out over and beyond a road); and then at the end of the film, when a similar shot follows a young army cadet who opens fire in a bank, leaves the scene of the crime, crosses the street outside, climbs inside his car and shoots himself. There is no obvious narrative connection between these two characters other than the fact that the woman who has adopted the runaway is in the bank when the shooting occurs. Beyond this, however, one can make the thematic link to the fact that the boy is escaping his old life at the beginning, while the cadet escapes his at the end. The boy escapes into the city and into capitalism (the van he stows away in is carrying washing machines), the cadet away from them in a manner that Haneke seems to suggest, particularly in light of The Seventh Continent and that film’s alienated family who escape “into” suicide, is the only true means of ridding oneself of the corruption of modern life.

71 Fragments of a Chronology of Chance (henceforth 71) has been seen as closing a trilogy that began with The Seventh Continent and continued with Benny’s Video (1992). However, as with several early Haneke films, 71‘s closest companion piece in the director’s oeuvre is a later film for which it is demonstrably the progenitor, Code inconnu: Récit incomplete de divers voyages (2000). Thus, just as Benny’s Video pre-empts Funny Games with its rigorous emphasis on media-depicted violence and a resulting social de-sensitivity and emotional sterility, 71 prefigures Haneke’s later masterpiece by virtue of both its style and thematic core.

Both films share a central theme of fate and chance – a chaotic cosmic ordering of drab, disparate lives – and a corresponding fragmented narrative structure that follows the unconnected characters as their paths crucially intersect. In Code inconnu, the action begins and pivots around a chance occurrence that involves several strangers; in 71, by contrast, the narrative builds up to the incident in the bank (signifying the paradigmatic and symbolic heart of corporate capitalism) that fatefully both unites and tears apart the characters’ existence.

Both films also make use of the stylistic trope, introduced in The Seventh Continent, of interstitial blackouts between, and sometimes in the middle of, scenes (although 71 does not share Code inconnu‘s deployment of the sequence shot; in this sense the latter film more closely resembles Hou Hsiao-hsien’s not thematically dissimilar Flowers of Shanghai [1998]). This highly particular and distinctive way of fragmenting the narrative reinforces the theme of alienation and communication breakdown inherent in the various personal stories (for instance, the grandfather who barely sees and talks to his granddaughter and whose own daughter all but shuns him) by literally alienating the shots and scenes from one another. There is no community whatsoever in the film, each character exists in their own insular bubble (as do we all?), and thus Haneke’s blackouts become a stylistic correlative; that is, each scene, and later each shot, exists with no obvious connection to any around it.

There is, of course, much more to this extraordinary film than has been touched upon here. For example, it features Haneke’s typical and idiosyncratic use of television: the reports on war from around the globe (many of these to do with indigenous outrage at American invasion and imperialism) juxtaposed with news about Michael Jackson. There is also (as always) the philosophical depth of Haneke’s work. He studied philosophy at Vienna University, and his work seems particularly influenced by the German philosophers Martin Heidegger and the contemporary existentialist Karl Jaspers (author of Man in the Modern Age), who theorised that we can never fully know other people in the modern world (2). And that in our technological, industrialised age our inner lives are neglected and not nurtured by human contact, a condition that inevitably leads to frustration, despair and disaster. Such a philosophy directly expresses the sentiments of 71 Fragments of a Chronology of Chance.