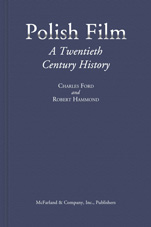 Polish cinema is distinctive in two ways which make it, for me, particularly interesting. First, the country’s turbulent history (the 123 years to 1918, and the six years of Nazi occupation, during both of which periods it did not exist at all as a political entity) had the result that an exceptionally high proportion of its films are on political or historical subjects, often demonstrating the intense Romanticism – a kind of recklessness – which is a long-standing tradition of Polish political attitudes and culture (example: Wajda’s Kanal [1957], about the Warsaw ghetto uprising). Secondly, the period of Communist rule, with its varying degrees of censorship, meant that filmmakers had to find subtle and allusive ways of expressing themselves; the examples of Iranian and Chinese cinema in the last 20 years or so also show how great art can result from such conditions.

As its title suggests, this book is basically a history rather than a work of criticism (although reference is often made to the critical reception of individual films). It does, however, stray somewhat from the history of Polish cinema by following the careers of famous directors and actors after leaving Poland; thus, Kieslowski’s French films are discussed at some length. Also, this book is the work of three authors: Charles Ford, who died in 1989, wrote the original French text, covering the period to 1986. This was translated by the American Robert Hammond. In turn, he later met Grazyna Kudy, a former student of Ford’s, who corrected and updated the book to the end of the century. As the preface explains, the three authors have distinctive approaches to cinema: suggestion for Ford, ambiguity for Hammond, covert political allusion for Kudy.

Few people outside Poland, I imagine, have any knowledge whatsoever of the pre-WWII cinema of that country. The first five chapters (80-odd pages) are a mine of information for any interested reader, going back to a documentary made in 1896 by a filmmaker, Matuszewski, who specialised in filming surgical operations. All this is set against the profound political and historical changes which were occurring. Hardly any of the names or film titles will be familiar, except for Aleksander Ford, whose long directing career ran from the silent era to 1973 and who founded the artistic movement START, and the actress Pola Negri, a major star in her day who left Poland and worked with Ernst Lubitsch among others. A key figure was another Aleksander, Hertz, a hugely influential producer who in 1906 co-founded the Sfinks Motion Picture Theatre, which gave its name to a production company whose greatest discovery was Negri. There are brief references in the text to Yiddish cinema, most of which originated from Poland.

For me, the most interesting parts of these chapters are the little throwaways: the lack of success of any religious film (in a deeply religious country) except DeMille’s King of Kings (1927); the deep dislike among Poles of dubbing, which meant that only one foreign-language film achieved real success (Snow White and the Seven Dwarfs [1937]); the censors’ insistence on changing the name of the sympathetically-portrayed Jewish character in Renoir’s La Grande Illusion (1937) in order to hide his Jewishness. Most fascinating of all, Charles Ford (the co-author) and Aleksander Ford, who were friends as teenagers, both changed their names to Ford after seeing and admiring The Iron Horse (1924), perhaps without realising that, had John Ford not also changed his name, they would have become Charles and Alexander O’Fearna!

The remaining nine chapters deal with the Second World War and its aftermath, and the profound effect it had on Polish cinema. Here we are on more familiar territory, and the two most interesting chapters for many readers will be the ones entitled “Three Directors of Note” (dealing with Zanussi, Polanski, and Wajda, the last-named up to the 1970s) and “The Comet and the Sun”, dealing with Kieslowski, a “comet” who burst into international recognition with Decalogue (1988) and was dead within a decade, and the later films of Wajda, described as a “constantly burning sun” who has been active and famous for half a century. Wajda’s classic war trilogy, culminating in the brilliant Ashes and Diamonds (1958), receive due attention, as do his equally famous Man of Marble (1977) and Man of Iron (1981), along with lesser-known films such as The Promised Land (1975) which the authors also admire. Six pages are devoted to Kieslowski’s French-produced films, though Blue (1993) and Red (1994) have no Polish connection apart from the personnel involved in making them. Personally I would have liked more on Zanussi, hardly any of whose films have had UK distribution.

The book includes a large filmography of over 500 films, but a surprisingly thin bibliography: just seven books, all published between 1985 and 2000 (I have read two others on Polish cinema published between those dates). Jan Jakub Kolski, whose films of rural magical realism have been hugely popular among younger Poles, merits only a single paragraph, while the two epic hits of 1999, Wajda’s Pan Tadeusz and Jerzy Hoffman’s With Fire and Sword, receive just a couple of lines each. Even if these films were not critically acclaimed masterpieces, their record-breaking box-office success, based as they were on two of the best-loved literary works, is surely a major event in Polish cinema history; perhaps the end-of-the-century cut-off was a factor here. There is no mention at all of Pope John Paul II, not just a film enthusiast himself but a figure who clearly had a major indirect influence on films from the 1980s on. It is also strange that the phrase “cinema of moral concern”, a movement dating from the 1970s, gets no mention at all in the Ford/Hammond text (which covers the years to 1986), receiving just a brief reference in Kudy’s final chapter.

The translation is a little stilted at times, and to describe Polanski’s masterpiece Chinatown (1975) as “a typical Hollywood film” is surely some kind of mistranslation. Another mistranslation is the chapter title “Unfulfilled Promises”, about three directors who, in the authors’ opinion, squandered their gifts (Skolimowski, Borowczyk, Zulawski). “Promises” should have been in the singular.

Overall, Polish Film: A Twentieth Century History is hugely informative for readers interested in the topic, but is unlikely to have wider appeal for those wanting in-depth criticism of individual films.