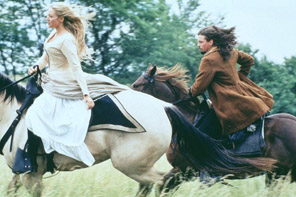 Ang Lee’s film, Ride with the Devil, is the best western since Clint Eastwood’s Unforgiven (1992). And since then, probably only Kevin Costner’s Open Range gets close. Ride with the Devil made no money and Open Range (2003) hasn’t either but we all know that box-office success doesn’t always equate with aesthetic success and achievement – although it did, happily, with Unforgiven.

After directing film versions of two novels, Jane Austen’s Sense and Sensibility (1995) and Rick Moody’s The Ice Storm (1997), Taiwanese-born Lee and his producer-screenwriter James Schamus made a beautiful film from another novel, Daniel Woodrell’s Woe to Live On, first published in 1987 (a very valuable first edition these days!) and republished in 1994 by No Exit Press.

Woodrell gained literary attention with a series of Southern crime-noir novels Under the Bright Lights (1986), The Ones You Do (1988) and Muscle for the Wing (1992), written in the late 1980s and early 1990s. The novels drew praise from such distinguished crime genre practitioners as James Crumley (“Woodrell knows wonderful and funny and degenerate things that speak to the best of the human soul in the worst of circumstances”) and James Ellroy (“stone brilliant”). Those books and some later titles, Tomato Red (1998) and The Death of Sweet Mister (2001), fit in with a sub-genre identified by Woodrell when he was reviewing Joe Lansdale’s Mucho Mojo, calling it “country noir”, stories of “dark suspense” set in “rural and small-town America” (1). Distinguished earlier practitioners included Edward Anderson’s 1937 Thieves Like Us, and journalist James Ross’ one novel, They Don’t Dance Much (1940). After writing this review Woodrell published Give us a Kiss: A Country Noir (1996).

Woe to Live on, in contrast to the Southern crime backwoods noir novels, is set in Kansas and Missouri during the American Civil War. It has been likened to Thomas Berger’s modern classic, Little Big Man, but is closer to some other deft literary revisions of this definitively American genre, all published between 1960 and 1972: E. L. Doctorow’s early novel Welcome to Hard Times, Charles Portis’ True Grit and John Seelye’s The Kid.

Lee says it was the language of Woodrell’s novel that first attracted him: “It’s a beautiful book, beautifully written. The language of the period is somewhat like Shakespeare’s” (2). From its opening sentence (“We rode the hillsides and vales of Missouri, hiding in uniforms of Yankee blue”) Woodrell’s novel lures the reader into the first-person narration of a young Dutch Southerner destined to become the sort of “hardened youth” whose experience of war and death (“we made trash of men and places”) is such that when he comes upon two human heads sitting “ripe and pecked” on a pole, he simply notes that one year earlier this sight would have sickened him “beyond consolation”. Now, “warfare was what we knew. Shocking us would have required some genius.”

But making this Civil War movie was not solely a matter of practising appropriate cinematic fidelity to a “beautifully written” book. It also allowed Lee to develop as a director: “I wanted to do a war movie after some of the family melodramas and women’s movies I’ve done. I wanted to do a movie with men on horseback, and guns.”

On Ride with the Devil‘s theatrical release the fans Lee had gathered with his renderings of 1970s America and early nineteenth century England didn’t follow him into this new generic terrain, with its grimness and beauty. That was a pity, because for me Lee’s film recalls the great moment of late 1960s and early 1970s American cinema, when so-called “dirty westerns” offered adventurous re-thinkings of that genre: films like Bad Company (1972), Robert Benton’s first film as a director, starring a young Jeff Bridges, Philip Kaufman’s The Great Northfield, Minnesotta Raid (1972), with terrific performances from Robert Duvall and Cliff Robertson, Robert Altman’s McCabe and Mrs. Miller (1971), Kid Blue (1973), and Dirty Little Billy (1972). Many of the novels mentioned earlier were also filmed during this period: Arthur Penn directed a film of Little Big Man (1970), Doctorow’s Welcome to Hard Times (aka The Bad Man from Bodie, 1967) became a film starring Henry Fonda, and True Grit was made in 1969 with John Wayne.

Ride with the Devil displays a care and intelligence increasingly rare in mainstream American cinema. While there are suitably memorable images of violence there is also a lot of memorable talk. Wonderful cinematography from Frederick Elmes, excellent performances from its (then mostly) young, up-and-coming cast of actors, and the acting debut of pop star Jewel should have brought new, younger viewers to this old genre. The film deserved a better commercial fate because it is as “stone brilliant” as the writing from which it is derived, and making such a fine film also “required some genius”.