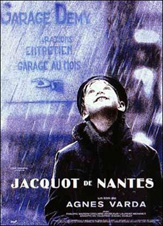 Yes, but filmmaking’s special. Not many make it. I advise you to help him stop dreaming.

While I was making a mortice and tenon joint, I was thinking of Hollywood.

The opening credits to Jacquot de Nantes announce that this dramatisation of French auteur, Jacques Demy’s childhood and adolescence is “une évocation écrite et réalisée par Agnès Varda”. Or, in other words, a work of evocation, scripted and filmed by the subject’s wife, herself, a formidably accomplished director, and reputed “godmother of the French New Wave”. Shot just before Demy died in 1990 during the film’s editing stages, this carefully observed tribute doesn’t so much record and recount a particular period from an individual’s life, as it suggestively summons it up. Taking her cue from Baudelaire’s poem “Le Balcon” from which she reads as the memoir commences, Varda uses the unfolding flow of things past to tease and draw out the essential spirit(s) of Demy’s world(s). Thus a central “re-enacted” narrative of Demy’s early years is punctuated with telling voiceovers and complementary cuts across to clips from his movies, as well as contemplative shots of the ailing cineaste, himself, often in repose.

One of the lines recited by Varda from Baudelaire’s sensuously nostalgic ode translates as “I know how to call forth the moments of bliss”. And for much of the plot’s running time we view a boyhood (played out by three different young male actors), which, while characterised by working-class privations, and the traumas of Occupation France during World War II, persistently percolates with joy. Living in cosy-verging-on-cramped quarters, adjoining the family service-station, Jacquot proves to be a buoyantly resourceful lad, ever engaging with all and everything around him, especially any form of popular entertainment. Responding to the impulses of his own creative imagination, he’s also always in the day-by-day process of working out how he might, with whatever means, fabricate idiosyncratic versions of these performative originals. And the mundane, sometimes frustrating effort involved in Jacquot’s various projects, from setting up a Punch and Judy piece, to experimenting with crude cell-painting and stop-motion animation fill him (and us) with joy, the joy of learning a craft, developing a talent, and sharing it with others.

So, even though most of Jacquot’s youth is filmed in crisp and clear, doco-style black-and-white, at the staging of an operetta or a puppet-show or a restaurant rendition of the haunting ballad “J’Attendrai”, the screen suddenly blossoms into momentary sprays of colour. Here is a time and space continuum where art iridescently informs and invigorates life. Where a son, heading bedwards, serenades his dad with a song bite about how love offers comfort to our wretched world. Where a mother rolling dough becomes Catherine Deneuve preparing food in Demy’s Peau d’âne (1970). Where the announcement that 50 hostages will be shot as reprisal for the murder of a German Feldkommandant pre-empts a sequence from Demy’s Une Chambre en ville (1982), featuring a confrontation between flag-bearing workers and the military police.

What were the influences from Jacquot’s youth and what have become the cinematic accomplishments of Demy’s adulthood are initially sign-posted by a hand painted on a notice-board at his father’s workplace, which points forward right toward the future, and then back left toward the past. But soon we find that even this arbitrary temporal separation device starts pointing the “wrong” way, blurring the “to-and-fro” of standard chronologic, and perhaps emphasising how evocation and memory when exercised in the present will ultimately constitute an impressionistic mix that is timeless. Those breaks from black-and-white into colour around instances of art-in-performance also become fitfully, or maybe selectively, random, bleeding into otherwise more prosaic scenes to indicate a certain emotional significance. For example, there occur sudden colour-flashes in the midst of Jacquot’s communion celebration, or when the adult Demy recalls a military parachute landing, or at the appearance of virtually any movie poster or placard at the local cinema, so fervently frequented by our young protagonist and his friends.

The brief but pithy scenes around the neighbourhood movie-house cannily point to the youngster’s final destiny and destination, even while his declared aspirations are much more artisanal than artistic. From his fondness for Disney’s Snow White because “She’s always singing. When she sweeps, when she washes up and when she makes cakes too”, to his utterly confident teenage declaration of Marcel Carne’s Les Enfants du paradis (1945) as “un chef d’oeuvre”, to his advice to mates that “You must see La Belle et la Bête right away…. I’ll even see it again”, we are witnessing the formation, and transformation, of a die-hard cinéphile. The practical filmmaker-within-the-romantic-film-buff can be heard as he breezily explains the “day-for-night” effect in Howard Hawks’ To Have and Have Not (1944), and his touching idealisation of women is intimated as he enthuses about “the bombshell” Rita Hayworth in Charles Vidor’s Gilda (1946).

How Jacquot, the amateur craftsman, shooting primitive micro-narratives on an Ercsam Camex in an upstairs attic, using a rollerskate for dolly-shots, becomes Jacques, the professional film director, completes this always partial, consciously fragmentary, portrait of a provincial sensibility driven by a vision of how to turn the everyday into a cinema of sophisticated-yet-innocent enchantment. His father’s insistence that his movie-mad son forego the fantasy of filmmaking for an apprenticeship in engineering is horrendously reinforced by a tech-school lecturer declaiming: “To summarise. Manual workers and intellectual workers are totally different from each other. Copy that down!” It is one of the strengths of Varda’s deeply considered and beautifully rendered profile of her husband that such divisions as thinking and doing, living life and making art, feeling close and watching from a distance, the ideal and the real, finally merge in a magical act of genuine evocation.