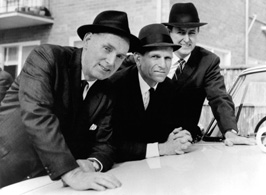 Homicide is the most important and most popular television drama series ever produced in Australia. Made by Crawford Productions, it ran for 12 years and 510 episodes, and commenced a continuous run of Australian production that has remained unbroken to the present day. It regularly rated in the high 40s and low 50s, achieving a peak rating of 54 in Brisbane in 1968. (Today’s most successful shows, with more TV sets in use, often only rate in the 20s.) At the time of Homicide‘s inception the Australian film industry was virtually non-existent, and television drama production was sporadic. Local series were expensive to produce, and cheap American programs were in plentiful supply.

Homicide was the turning point. From the very beginning, its healthy ratings indicated that Australian production was not only viable but also desirable. Homicide was made on one-tenth of the budget of an overseas program, yet it consistently out-rated them all. The early episodes were very much pioneering efforts, and conditions were vastly different from today. Improvisation and imagination were the rule, and actors were often required to do their own stunts – fights, falls and driving.

Homicide featured filmed segments on outside locations (most drama up to that point had been confined to studio scenes), and these film segments were integrated with interior scenes shot on video. There was no outside sound in the early episodes. Later, outside dialogue was post-synched – dubbed in a studio using a guide track recorded during filming – until eventually “real” sound was used. The original film unit consisted of only four crew members: a cameraman, a grip, director Ian Jones and assistant director David Lee. They would travel to the various locations in two cars: a station wagon loaded with equipment, and the police car for use in the scenes, which carried props in the boot. That the film scenes looked so good with an absolute minimum amount of equipment and time is testament to Ian and David’s ingenuity and ability. “With only four people in the crew it was often necessary for everybody to get in and give a hand in order to get the job done”, said Ian Jones. “If it was muddy a cameraman wouldn’t wait for a groundsheet as he probably would now. He’d flop down in the mud and film. The actors often did stunts which would now be done by professional stuntmen.” (1) The exterior film scenes were recognised as being a large factor in the show’s success.

A milestone was achieved with episode 56, “Flashpoint”, an all-film episode shot entirely on location at Mt. Cathedral, near Buxton, in the ranges about 160 kilometres north-east of Melbourne. Video-tape was not used at all, the very few interior scenes also being shot on film – not even the familiar detective’s office set was featured. It was written and directed by Ian Jones, David Lee was assistant director, Ian Crawford was post-production manager, and the regular cast were Leonard Teale, Terry McDermott and John Fegan. Norman Yemm played the villain (a role originally intended for Ed Deveraux) and, as Norman was a professional runner, his athletic prowess came in very handy for the physically demanding part. Cast and crew risked their lives filming on the rugged cliffs – no blue screens, no stunt doubles, no safety nets – and the resulting scenes were quite spectacular. There were running scenes on cliff faces, mountain-top fight scenes, high-speed car chases on rutted tracks – even a forest fire and a helicopter rescue.

“It was pioneering stuff, it was magic”, said Yemm, “but the risks we took were unbelievable. I remember Terry McDermott dug his feet in and said ‘I’m not going around that edge there, what if I slip!’ It was a hundred feet fall, and there were no safety nets or anything like that.” (2) With a budget more than double that of a standard Homicide episode, “Flashpoint” was produced as an experiment – to explore the dramatic impact of a total film treatment, to assess the economic viability of the technique and determine the expertise required to produce it. “Naturally the studio settings limit our range and movement”, said Hector Crawford, “that’s why for us – and for the Australian film industry generally – this all-film episode is an exciting experiment.” (3) It was recognised that an all-film treatment of an Australian series could enhance its prospects for an overseas sale. There was some concern that the “Flashpoint” script would not run the required 48 minutes, and extra scenes were written and filmed. This extra work in effect made the location shoot resemble that of a feature film, but as it turned out the extra scenes weren’t required, the original script running to its intended time.

“Flashpoint” was also the first use of true location sound in the series, and many hours were spent overcoming problems. Ian Jones stated that the recording of the episode, which took seven days, could have been done a lot quicker if they were not learning location sound as well (4). Leonard Teale elaborated:

I think the sound man worked about 22 hours a day. We were shooting a scene with dialogue on a gravel road, and it took about five attempts to get it because every time a car would come along or a plane would go overhead or something. For the first time they realised what the difficulties would be, and from then onwards Ian Crawford was absolutely sure you couldn’t get any suitable sound on location, which is why we continued to post-synch long after it was necessary. The only way we could convince them that you could get sound outside was to make the guide track so good it was better than post-synch (5).

Crawfords were quite prepared for the possibility that “Flashpoint” may not have been suitable for screening and would remain a backroom exercise. Fortunately, the episode proved to be very effective and went to air on April 19, 1966. “Flashpoint” demonstrated that a small budget unit could handle all-film production very satisfactorily, even though it was more expensive than film/video integration. Other companies would produce all-film series in the late 1960’s; however, Homicide did not shift to all-film on a permanent basis until the first colour episode in 1972. Standards grew over the years, and in its last three years Homicide had a slick, sophisticated, professional quality – equal or superior to any contemporary program, and most since.