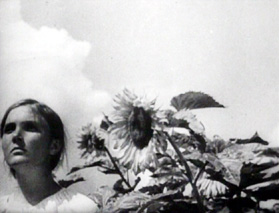 David Thomson, in his A Biographical Dictionary of Film, notes that Alexander Dovzhenko was: “The first intensely personal artist in Russian cinema” (1). This statement, echoed by the noted historian of Soviet film Jay Leyda (2), conveys precisely the often agonising, overwhelming sense of affect one still finds in Dovzhenko’s best films; the unmistakeable, ineluctable, almost cathartic feeling of a filmmaker engaging fully and unreservedly with the work he is producing.

It is, therefore, entirely fitting that Dovzhenko should have been the least overt theorist of the great avant-garde, montage school of 1920s/’30s Soviet filmmaking (his contemporaries, such as Eisenstein and Pudovkin, were generally putting into practice published theses on film style). Because, as befits a director who passionately chronicled the struggles of the peasant class of his native Ukraine, and who drew extensively on both indigenous folklore and his own life, his work appeals more to the heart, and his montage (in contradistinction to Eisenstein) to the senses, than to the mind. And this can be clearly seen in what is perhaps his best – certainly his best known – film: Earth (Zemlya).

Seen today as the final work in a loose trilogy that also comprises Zvenigora (1928) and Arsenal (1929), Earth is Dovzhenko’s ultimate paean to nature, the land and those who toil on it and whose lives are inextricably bound up with it. The film is literally teeming with grandiose images of the natural world: such as the opening shots of a vast sky and rolling fields, of sunflowers and apples. The farmers collective relationship to this world and its order is immediately established through the juxtaposition of an old man dying (the end of life, of a cycle) and young children (the beginning); the fact that they are eating the apples that lie strewn on the grass further crystallises the sense of a constant, natural cycle of birth, growth and death (as does the justly famous shot of a woman and a sunflower, in which the composition makes them almost graphically contiguous across the frame).

This prologue to the main drama of the film also succinctly introduces other elements central to the narrative. For example, the death of the old man can be read as the passing of an old order to make way for a new way of life, symbolised in the story by the tractor, the machinery, that will make life and work much better for the farmers. Also, Dovzhenko’s style – his almost Dreyer-esque emphasis on close-ups of characters without clarifying their spatial relations through establishing shots (and the way this approach produces graphic matches across the cuts) – works to underline the essential, ultimate unity and togetherness of this family, and by extension this class (and also, in line with the director’s appeal to the senses, to heighten and sustain intensity and emotion).

This unity is further highlighted, and extended into a directly Marxist symbiosis of workers with means and ends of production, in subsequent episodes in the narrative, such as the arrival of the tractor brought by the grandson of the old man who died at the beginning. In this section, everyone works the fields together, including the women, and in a gradually accelerating montage sequence reminiscent of Eisenstein’s The General Line (1929, another communist story of farmland collectivisation), the wheat is reaped and processed. Here again, Dovzhenko’s often graphically matched shots of the workers make a powerful statement about collectivism and universality, something intensified by the sporadic eliding of their faces.

This use of characters as entirely representative of the people, of a class, was common in Soviet films of this time: from Eisenstein’s Strike (1924) and The Battleship Potemkin (1925) through Pudovkin’s The End of St. Petersburg (1927, on which Dovzhenko worked as editor) to Dovzhenko’s own Arsenal, which begins with the folktale-like inter-title: “A mother had three sons”. And so it is in Earth. The final montage (described by P. Adams Sitney as “The longest and most elaborate example of parallel montage in the history of the cinema”) (3) culminates in a speech to the village wherein a man pleads with the masses to look and see, “That communist aeroplane of ours up there”; a plane in which the deceased’s spirit resides and which will spell the end of their “class enemy”.

What this uproarious moment, which seems analogous (in its tempo and rhythm) to an orchestra reaching the tremendous climax of a Tchaikovsky or Mozart overture, seems to be doing is nothing less than equating the newly empowered peasant class with an omniscient, all powerful entity: that is, with god. And, interestingly, this comes just after the conservative Priest has been seen begging for his god to send down his wrath and fury upon the farmers, to smite them as in the Old Testament (old being the operative word).

Thus, Dovzhenko is belittling not only the landed gentry, but also the church – something not uncommon in Soviet films of this time (see, for example, Strike and Pudovkin’s Storm Over Asia [1928]) – and truly establishing how all pervasive the new workers class is. The fact of a baby being born at the very end cements the idea of the birth of this new order, this new life for all, which the subsequent return to shots of the landscape, and particularly of apples in the rain (cleansing, washing away the old), relates back to the natural order, the natural cycle. Truly has man found his place in the world.