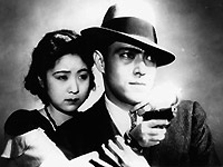 In Dragnet Girl, Ozu ventured outside his habitual terrain, in both setting and genre. Normally he concentrated on the everyday rituals of the average family, on the rifts and rapprochements between parents and children as they swing between resistance and conformity to social pressures on matters of wide public concern – changes in marriage, education and employment patterns, shifts in morals and manners. In this film he focused on the troubled relationship between a gangster and his moll (who is also a member of the typing pool in a business company during the day). Not noted for his interest in sex and violence, let alone heterosexual relationships, Ozu would seem to be out of his depth. But he characteristically charms us with injections of humour, visual rhymes and homages to Hollywood, as well as demonstrating his ability to extend his visual repertoire beyond washing lines, telegraph poles and kettles.

Dragnet Girl is set in Yokohama which, like most port cities, was noted for the prevalence of prostitution and vice, and its generally low moral standards, due to the large number of visiting sailors and overseas residents. As in Hollywood gangster films, the gangsters and their dames are sharply dressed in flashy attire and habituate a boxing club, a nightclub, a poolroom and the street. Instead of washing on the line, telegraph poles, kettles and vases, Ozu uses hats, guns, billiard cues, punching bags, items of jewellery, records, suitcases and a coffee pot as recurrent visual motifs. The coffee pot is repeatedly featured in the scenes set in the apartment shared by the gangster and his moll. Rows of typewriters and a row of hats on pegs are repeatedly featured in the scenes set in the office where the heroine, Tokiko, works as a typist. Her competition, the stereotypical good girl, who is distressed about her student brother drifting into crime, works in a record shop, where the RCA trademark dog is repeatedly featured as a visual motif. The sets and cinematography were reputedly influenced by Sternberg and Hollywood gangster movies of the early 1930s. There is certainly an emphasis on glass surfaces and light and shadow, as well as a busy mise en scène, all of which are unusual in Ozu.

The film can be situated as an example of Shochiku’s experimentation with genre diversification and Hollywood conventions in its first decade and a half. While the Nikkatsu company were more influenced by the local theatre, in choice of scripts, casting and performance style, the Kamata studio of Shochiku prided itself on its modernity and borrowings from Hollywood. The directors there were great fans of American comedy, and Ozu initially trained as a director of slapstick (the so-called nonsense genre). Under Shiro Kido, the head of the studio, the Kamata team eventually developed a distinctive genre of family sitcom (called the shomin geki or home drama) that concentrated on the everyday problems of family life and that, not unlike Chaplin’s cinema, combined pathos and humour. Some of Naruse’s early movies made at Shochiku’s Kamata studio betray an uncomfortable mixture of melodrama, slapstick and social realism, but the studio stalwarts (Shimazu, Shimizu, Gosho and Ozu) soon mastered the art of welding these genres seamlessly together with what became known as “the Kamata touch” – a charmingly light, affecting, modern sensibility. Until the new sound studio was built at Ofuna in the mid-1930s, Shochiku continued to produce largely silent movies – even though they had made a successful sound movie already in 1931 (see below) – in order to service their large number of exhibition outlets which were not equipped for sound.

In the same year as Dragnet Girl, Hiroshi Shimizu, Ozu’s colleague at Shochiku, also produced a film set in Yokohama, with a similar romantic triangle involving two girls (one respectable, the other disreputable) in love with the same guy. But the Shimizu film is not a gangster movie; it is a fully-fledged romantic melodrama. Ozu’s film is a genre exercise and he seems to have recognised his limitations by immediately reverting to his real forte – the everyday life of ordinary people – in his next film. In Passing Fancy (Dekigokoro) (1933), he displayed an emotionally stronger engagement with the endearing personality, trials and tribulations of a thick-headed loser (a single father) as he details his humorous and pathetic attempts to court a young lady and look after his scruffy son (played by the same boy who featured as the younger son in I was Born But…, [1932]). Though lacking the tight narrative and formal construction of Dragnet Girl, there is an emotional engagement with the two central characters of father and son in Passing Fancy – as well as a poignancy in their relationship – that is lacking in the central relationship between the lovers in Dragnet Girl, despite the spirited lead role performed by Kinuyo Tanaka.

Dragnet Girl provides an opportunity to view this star actress in one of her early roles. In the early 1930s, Tanaka was a Kamata studio actress, playing leading roles for Gosho, Shimizu and Ozu. She had featured in the role of the young wife in the studio’s first sound film, The Neighbour’s Wife and Mine (Heinosuke Gosho, 1931), and in several previous Ozu movies. In the post-war era, she was the star of almost all of Mizoguchi’s movies. As the gun-toting tough heroine of Dragnet Girl, she not only harbours a heart of gold (as conventionally do most fallen women of opera, fiction and movies), she also turns out to have the moral fibre, resolute determination and reformist zeal of a Salvation Army crusader – even if she has to shoot her man in the foot to teach him his lesson.