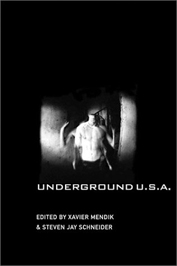 The non-obviousness requirement was once the bête noire of patent law. Many a brilliant invention looks quite obvious once described. But after the patent office abandoned non-obviousness, someone succeeded in patenting a stick. Unfortunately, Underground USA: Filmmaking Beyond the Hollywood Canon, a new collection of essays edited by Xavier Mendik and Steven Jay Schneider, consists of a lot of sticks, and very few real contributions to the study of underground film.

It’s a shame, because Mendik and Schneider are at least half right when they claim that “only a few books and edited collections have been produced which critically explore aspects of the American underground scene” (p. 1). In actual fact, the American underground scene has been “critically explored” to death, and then some. Just about every ambitious graduate student studying film theory knows that underground movies are the flavour of choice. The real problem is quality. The vast bulk of academic writing on underground film consists of an impossibly dull and utterly content-less recitation of some comically solipsistic “theory”, keyed to an artist who actually deserves real study. Unfortunately, Underground USA is no exception.

At first glance, the book looks promising. The editors define “underground film” very broadly, to include everything from skin films to gore films, and from blacksploitation to the avant-garde. Nothing wrong with that. Any book consisting of essays on Abel Ferrara, Radley Metzger, Curtis Harrington, Larry Cohen, Bruce Conner, Andy Warhol, Melvin Van Peebles, Doris Wishman, Harry Smith, Harmony Korine, Herschell Gordon Lewis, John Waters and Lloyd Kaufman, as well as biker movies, snuff films, film-coops and the underground of yesterday and today, ought to be entertaining. Think again. If you’re the sort of person who eagerly anticipates the new book by “Kristeva, Cixous, Derrida, Ronell” – or would even read it on purpose – you might enjoy Underground USA. Otherwise, be prepared. Of the 20 or so essays in Underground USA, a few are very good, several are at least informative, and the rest are a total waste of time.

Underground USA begins most promisingly with an excellent forward by Lloyd Kaufman of Troma Pictures. Witty, irreverent and basically unpretentious, Kaufman simply describes what he does and why he does it. The genius behind The Toxic Avenger (1985), Tromeo and Juliet (1996) and Terror Firmer (1999), Kaufman specialises in taboo-demolition and bodily fluids. Unfortunately, the more subtle values often associated with film art rarely survive the carnage. As Kaufman puts it, “Troma is an example of underground, micro-budget art that produces macro-violence-vomit-tits-and-more-tits” (p. xiv). As indeed it does.

The reductio ad absurdum of an underground filmmaker, Kaufman’s “stick it to the Man” brio is charming, because he refrains from putting on airs. His mind-bendingly puerile films are often exceptionally funny, because they literally appear to have sprung fully formed from the mind of an obnoxious 10-year old boy. True, Troma isn’t backed by a major studio. But if this is “subversion”, then the establishment hasn’t got much to worry about. Only a real nudnik would claim otherwise.

Like Mendik and Schneider, for instance. In their co-authored essay “A Tasteless Art: Water, Kaufman and the Pursuit of ‘Pure’ Gross-Out”, they discover a “serious and potentially subversive message … capable of overturning wider social norms and values” (p. 220). Presumably they refer to norms like not picking your nose at the dinner table or urinating in public. Troma films may indeed represent a “subversion” of those norms. But I suspect that Kaufman himself would disavow such a quixotic crusade. Predictably, Mendik and Schneider trot out the usual references to Bakhtin and the “carnivalesque”. I imagine that poor Bakhtin would be mortified by the claptrap he’s been associated with over the last decade. With all due respect to Kaufman, he’s no Rabelais.

Still, some of the essays in Underground USA are well-worth reading. In particular, in “Film Co-ops: Old Soldiers From the Sixties Still Standing in Battle Against Hollywood Commercialism”, Jack Stevenson provides an excellent introduction to the history of the film co-op movement. Film co-ops are businesses (generally non-profits) formed to distribute films that aren’t commercially viable. In the ’60s and ’70s, film co-ops sprung up all around the world, in response to the lack of distribution options for avant-garde, independent and underground films. Stevenson focuses on one of the first, the New York Film-Makers’ Cooperative, founded in 1960-62 by a group of New York filmmakers and still operating today. Stevenson argues that co-ops still provide a necessary distribution outlet for independent filmmakers. But more importantly, he recognises that they have become de facto archives, preserving and making available historically important underground films that would otherwise be lost.

Underground USA also includes a couple of interesting previously published essays by Nick Zedd and David Schwartz. Zedd intended his well-known “Theory of Xenomorphosis” as a kind of underground manifesto. It reads more like a send up: Rudolf Steiner meets Roger Corman, maybe. But Zedd’s bombast is pure underground film at its charmingly puffed-up best. Where Mendik and Schneider come off as sophomorically pedantic, sonorously invoking literary theory in the service of trivialities, Zedd is facetious and funny. On re-reading Zedd’s manifesto, I was surprised to notice that he quotes only Amos Vogel, Rudolph (sic) Arnheim, and Friedrich Nietzche (in passing), all bona fide “establishment” figures. You won’t miss the trendier sorts, who are abundantly represented in the rest of the book. And David Schwartz offers a fine – if extremely abbreviated – historical overview in “Visions of New York: Films From the 1960s Underground”. Written in conjunction with an excellent program of rare and obscure films that he programmed at the American Museum of the Moving Image in 2000, Schwartz’s essay only touches on the most significant moments of a seminal period of underground filmmaking. But it remains an excellent introduction to the blossoming of the avant-garde element of American underground film.

However, most of the essays in Underground USA read like desultory term papers. Some probably are. But actual professors wrote some of the most embarrassing ones. For example, Tony Williams of Southern Illinois University at Carbondale contributes a notably pointless essay on Larry Cohen, which amounts to yet another rehashing of the inevitable, interminable Laura Mulvey. Why he bothers is anybody’s guess. It’s hard to imagine that anyone worth paying attention to takes Mulvey’s totalitarian conception of ideologically acceptable movies seriously anymore.

Apparently, Williams believes that Cohen’s Special Effects (1984) “suggests one possible avenue for achieving Mulvey’s idea of a ‘transformational potential’ within popular culture”, because it “combines a self-aware textual pleasure within a narrative format that remains uncompromised by the very nature of the exploration achieved by its director” (p. 62). In other words, it’s a funny riff on Hitchcock’s Vertigo. But wait! Williams does Mulvey one better, arguing that her theory that only “avant-garde” films are “oppositional” is all wet, because Mulvey’s theory “became redundant with the emergence of a diverse number of theories associated with the fluid nature of visual spectatorship” (p. 54). Circumspect readers will note that the validity of a theory normally depends on its ability to explain reality, not its novelty. Mulvey’s theory isn’t “redundant” – it’s hogwash, just like the equally nonsensical theories that followed it. Thankfully, at least Williams doesn’t “argue for demolishing the usual convenient classifications concerning the nature of underground cinema” (p. 53). Hell, legions of graduate students have demolished those so many times over, he’d be lucky to locate any.

In his unusually unhelpful essay “The Ideal Cinema of Harry Smith”, Jonathan L. Crane provides a less-than-ideal introduction to his subject. Crane wraps nuggets of readily available information about Harry Smith in shrouds of pompous nonsense. The result is utterly lacking in substance, consisting largely of vacuous non-sequiturs: “Smith’s work does not protest against the limits of the medium and the hegemonic power of the film bloc. These films make no attempt, even implicitly, to suggest that they are superior to run of the mill fare” (p. 144). Even Crane’s soggy generalities are hopelessly off the mark. For example, many avant-garde films aim to “rework vision”. Harry Smith’s painted films – while excellent – do not. They are abstract animations, formally similar to the popular films Len Lye made as advertisements in the ’30s. Crane’s claim that Smith’s painted films appear “as if there were no Hollywood and no film history prior to his highly idiosyncratic engagement with celluloid” (p. 142) in the Early Abstractions is simply false, insofar as it makes any sense at all. Thankfully, Crane doesn’t insist that Smith’s films are “agitprop”. But that’s small consolation.

But the most unfortunate aspect of Crane’s essay is its lack of substance. Few readers of Underground USA will have ever seen a Harry Smith film. Crane fails to provide more than the most cursory description of any of them. In fact, his description of Smith’s greatest film, No. 12 (Heaven and Earth Magic) (1962), is limited to “an hour-long distillation of Smith’s most elaborate and abstruse collage. Imagine Rube Goldberg and Hieronymous Bosch animating the same frame in tandem with Currier and Ives” (p. 148), followed by Smith’s two sentence “plot summary”. After the sententious pop-metaphysical nonsense filling the rest of Crane’s essay, such laziness is inexcusable.

Curtis Harrington is one of the few filmmakers who managed to move from the avant-garde to Hollywood, albeit with somewhat limited success. In “Curtis Harrington and the Underground Roots of the American Horror Film”, Stephen R. Bissette bemoans the woeful neglect of Harrington’s films, while inadvertently contributing to it. Bissette’s discussion of Harrington’s later commercial film work is quite good. But after acknowledging that he has seen only a couple of Harrington’s avant-garde films, Bissette implies that they are unavailable. It’s rather disturbing to realise that he’s writing about films he’s never seen. But it’s a lot more disturbing when you know that he could have seen them very easily. Apparently, Bissette doesn’t realise that the Film-Makers’ Cooperative has long rented prints of Harrington’s avant-garde films for about $20 each. And as Stevenson implies, it’s the first place a serious researcher would look for films like Harrington’s. Furthermore, its entire catalogue is available online.