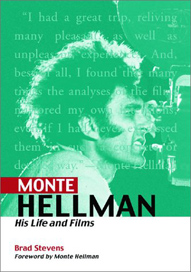 What really knocks me out is a book that, when you’re all done reading it, you wish the author that wrote it was a terrific friend of yours and you could call him up on the phone whenever you felt like it. That doesn’t happen much, though.

Brad and I have never met, but between us we have exchanged nearly five hundred e-mails over a period of a year-and-a-half. He constantly pressed me to remember, to paraphrase Borges, unforgettable events now forgotten. I, in turn, enlisted the help of friends and co-workers to try to pin down names and dates.

The result is the history of a career that now seems strange to me. But it didn’t seem strange while I was experiencing it. I merely continued to pursue projects that interested me, at the same time taking whatever work came my way.

A few years ago, US film scholar Ray Carney was brought out to Australia by the American Information Service to give some talks on the films of John Cassavetes. Carney and I had met some years earlier when he was a special guest at an Avignon Film Festival that included a Cassavetes retrospective which then moved on to the Paris Cinémathèque for more honouring of the work of Cassavetes.

When he was in Australia on the AIS-sponsored gig, Carney gave a talk in the AIS’s central Sydney location to some invited film teachers and writers/journalists. The talk took the form of his saying (once again) how important a filmmaker Cassavetes was and how under-appreciated. When he took some questions after the presentation I suggested that the time had now come for Carney to qualify that discourse of critical neglect because, partly as a result of his own work (three books devoted to Cassavetes), Cassavetes could no longer be said to be an under-appreciated filmmaker. If indeed, that ever was the case. The French loved Cassavetes from very early on, London film magazines praised his work, he was taught in Australian university courses from 1978 or so on — the year I came to teach film at Griffith University, after studying in Canada for a couple of years, Husbands and other Cassavetes films were on the curriculum, and we showed Anja Breien’s Hustruer (Wives, 1975), the Norwegian comedic feminist response to Husbands. My point was that even if Cassavetes were under-appreciated in mainstream newspaper reviewing in the US he had received significant critical acclaim from other (impressive) quarters from very early on. Whereas someone like Monte Hellman genuinely was neglected. Ray agreed that Hellman deserved much more critical attention but of course didn’t accede to my piece of historical-critical revisionism re Cassavetes’ critical reputation.

That long lead-in anecdote sets the scene for this short review of Brad Stevens’ book on Hellman. Stevens has appointed himself Boswell to Hellman’s Johnson and the book is, among other things, a triumph of e-mail auteurism. Hellman collaborates and corroborates, remembers, corrects, and discusses all aspects of his work in the email exchanges with Stevens that are woven into the various chapters.

Since Hellman directed a theatre production of Beckett’s Waiting for Godot in 1957, as a western, with Pozzo as a Texas rancher and Lucky as a Native American (p. 8) – given the current vigilance of the Beckett textual purity association, he wouldn’t get away with that now – Stevens uses quotations from Waiting for Godot as epigraphs to most of his chapters. This is his way of signalling Hellman’s perpetual waiting for work as a director-editor-screenwriter, and it also alludes to fans’ waiting for another Hellman movie. Stevens focuses “as much on the ‘gaps’ – the unmade projects, the anonymous piecework, as the primary texts” (p. 2) and in this way he gives a wonderfully detailed sense of the longeurs involved in Hellman’s career. Four chapters are called “In Between Projects” (1966-70; 1974-77; 1978-87; 1989-2002), and if you add up all the years it comes to 33 and that constitutes a lot of waiting. For another of his chapter’s epigraphs, Stevens has a nice quotation on Hollywood and waiting from novelist-screenwriter Rudy Wurlitzer. Wurlitzer was interviewed by Chris Petit for the BBC series Moving Pictures (1994) and said the following:

Like many people, I first came to know about Hellman by knowing about Roger Corman. I encountered his films out of sequence; I had seen Two-Lane Blacktop (1971) a couple of times before I caught up with The Shooting and Ride in the Whirlwind, the two “existential” westerns made back-to-back in 1966 which were available in Australia from the late ’70s in 16mm format courtesy of Filmart in Adelaide. I was surprised to learn from Stevens’ book that neither western had a theatrical release in the US “until 1971, when Jack H. Harris purchased them on the strength of Jack Nicholson’s new-found fame” (p. 57). Some of Nicholson’s fame had come with Five Easy Pieces, a film written by “Adrien Joyce”, or Carole Eastman, who also wrote The Shooting. I was intrigued to hear Ride in the Whirlwind was based on Bandits of the Plain, some western stories and diaries Nicholson had found in the LA Public Library, and on Vittorio de Seta’s Bandits of Orgosolo (1964). It would be nice to see a double-bill of those two westerns, Bandits and Ride, in some future repertory season.

Stevens shows how often Hellman’s career overlapped with directors such as Sam Peckinpah, James Frawley and Jonathan Demme. Readers might be surprised to hear that Hellman’s name is mentioned as a possible director of films such as Kid Blue, The Mechanic, Pat Garrett & Billy the Kid, Ulzana’s Raid, Billy Two Hats, Fat City, Junior Bonner, most of which became wonderful films from other directorial hands. Stevens takes us through Hellman’s later films in a serious way, China 9, Liberty 7 (1978), Iguana (1988) and we hear of two favourite projects sadly never able to be brought to the screen: Hellman’s adaptation of Charles McCarry’s first novel, The Miernik Dossier, a fine thriller in the Eric Ambler tradition (the film was to be called Secret Warriors after Sergio Leone gave Hellman that title); and In a Dream of Passion, his proposed adaptation of Robbe-Grillet’s House of Assignation/La Maison de Rendez-vous.

The e-mail contact between critic and filmmaker works nicely, and Hellman’s long career as a frustrated director and jobbing multi-skilled film craftsman comes across vividly. It’s interesting to think of Hellman’s career alongside, say, Bob Rafelson’s. Neither gets out of the box very often, and Rafelson allegedly had fuck-you money early on by way of his successful TV show The Monkees. But it is clear that it is Rafelson’s close relationship with Nicholson, and Nicholson’s continuing star power that helps Rafelson get film projects up from time to time. In Hellman’s case, based on many scattered comments throughout this book, the guardian angel figure seems to have been Mike Medavoy who aided Hellman many times over the years, pushing work his way when he knew Hellman was in financial need. That apparently banal administrative detail is worthy of greater emphasis and elaboration than, for example, spending time arguing that Hellman is superior to the schlocky materials of Silent Night Deadly Night III: Better Watch Out (1989). At this moment Stevens seems to forget Hellman’s filmmaking origins in the Corman training school. For while it is true to say that Hellman, like many directors, wants to use genre in unusual ways, we have to remember at every turn the enabling dimensions of genre, the fact that it is precisely this obligation the commercially contracted director has to certain codes and conventions that initiates an utterance that later is able to turn things inside out, deviate and become expressive of other interests. The (minor) flaw here derives from Stevens’ occasional fan-like keenness to insist on the artistic stature of his authorial subject, his readiness to practise a somewhat strident redemptive auteurism and aesthetic reclaiming that so much of his book quietly works against, simply by showing us how much skilful work, in a variety of capacities, Hellman has performed over so many years.

All I mean by this is that readers of Stevens’ book most likely have already, long ago, been won over to his critical orientation: namely, a lionising of this director. I certainly was, before I read the first page. What the Hellman film fan-critic is happiest about is the presence of this substantial volume, and especially the abundant, new (e-mail) interview material it makes available. As I read the book I was reminded of those ground-breaking little Edinburgh Film Festival volumes (on Sirk, Fuller, Corman etc) from the late ’60s and early ’70s, and also of the final section, “Welles’ Career”, of This is Orson Welles, which page after page shows how much creative work is happening in a career that seems to have stalled or ended, that doesn’t seem to be sending out authored bits of film. Just as the Welles book valuably records how much work that great figure did across a bewildering range of projects and media forms during a life also spent waiting, so Stevens meticulously records the various film activities with which Hellman has been involved. And from this combination of “the ones that got away” (i.e. the film projects that most truly would have expressed Hellman’s artistic interests) and “the ones that paid the rent”, a solid and engaging account of Hellman’s work in film is built up.

Stevens’ thematic analyses of Hellman’s work are based on the general observation that “Hellman’s cinema is a cinema of outcasts, of societal rejects who … exist outside the mainstream” (p. 107). When he discusses Hellman’s cult classic, Two-Lane Blacktop, he links it to the director’s more general interest in landscape and cinematic representation. As Hellman says,

For me space is not neutral … New Mexico is not Oklahoma, and I never used a scene outside of geographical context. The landscape is different and, from this point of view, everything was very precise. It’s like the sound or the dialogue … In a sense I’m a landscape painter, but I don’t want to show a landscape only for its beauty, or to enhance its value. I love shots involving foreground, middleground and background action. It’s really, for me, what movies are all about, and it’s one of the great things about shooting on location. The set actually becomes a collaborator. It contributes to the overall drama. You discover things as you go along (p. 87).

For a long time my favourite pieces of writing on Hellman were the following: the moment in Tarantino’s Sight and Sound article “A Rare Sorrow” in which he expresses his admiration for a scene and a line of dialogue in Ride in the Whirlwind, where a character looks at a man hanging from a tree and says, “Man gets hanged”; Greg Ford’s quirky review of Two-Lane Blacktop in Film Quarterly, and John Flaus’ wonderfully written review of that film in Metro 109. Now that Hellman’s films are becoming more available through DVD release, and after movieforum.com has reported that Richard Linklater has confessed his appreciation of that film – while attending the Toronto Film Festival to present his two films, Tape, and Waking Life, adding that Hellman had written him an encouraging letter when he was prepping Slacker – the revaluing and reconsidering of Hellman’s films will continue. And Brad Stevens’ book will be a major contribution to that welcome process.