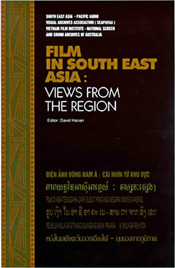 Given the paucity of English language literature regarding South East Asian cinema, this rather erratic anthology contributes substantially to improving our knowledge of cinema in this region. Structured in sections devoted to ten “national” cinemas, Film in South East Asia is positioned by David Hanan as a generator and promoter of discourse regarding the film history both within and across the geo-political boundaries of the featured countries. Most of the essays trace chronological histories of industrial and cultural practices within this spirit of national difference and co-operation. In many cases, the authors are or have been involved with state organisations, local publications and/or in making films respective to their domestic fields of interest. Eight countries from South East Asia – the Philippines, Vietnam, Laos, Cambodia, Thailand, Malaysia, Singapore and Indonesia – are represented, with final chapters on New Zealand and Australia offering critical accounts of two Asia-Pacific, predominantly English language, national cinemas as interesting points of comparison and departure.

As a text aspiring for better regional awareness, the decision to largely isolate national cinematic histories from one another is a provocative one for theorists concerned with questions of globalisation and cultural diversification. In his introduction, Hanan briefly argues for the recognition of national, linguistic and ethnic difference in film studies, contending that the majority of South East Asian people are “culturally resistant in their attitudes” and that “the best of cinema is concerned with communicating in vital ways the experience of people, their history, their culture and their ways of representing themselves” (p. 15). To some extent these beliefs derive from Hanan’s extensive personal experiences in nurturing South East Asian (especially Indonesian) film culture, but as individual judgements they tend to devalue aspects of conflict between local, national, regional and other transnational essentialisms and relations. Formations of the national that hinge on culturally specific approaches risk excluding some of these tensions.

Many of the book’s contributors expose the complications of such an approach. The chapter on Malaysia is a salient example of where an essentialist cultural nationalism encounters some major complications. Stating that Malay films have been the product of the “interaction and intermingling of the various cultures, religions and beliefs” of Chinese, Indian and Malay ethnic groups (p. 163), Baharudin A. Latif articulates the history of Malaysian cinema largely in terms of a moral struggle for the expression of a unique Malay identity. Latif describes the Shaw Brothers studio of the ’50s and ’60s as a “film colony” where “artists were housed like police personnel in settlement-like quarters” and “worked like regimented ant armies … for a sympathetic overlord” (p. 172). In search of merits within this restrictive production environment, Latif “discovers” distinctive Malay identity in the star system since performers like P. Ramlee “managed to attain some degree of individuality through sheer screen persona” (p. 172). Considered in addition to his description of actress Kasma Booty as a sex symbol “whose vital statistics included a demure and delicate persona, physical endowments with curves in the right places … [and] a pleasant charisma” (p. 171), we might want to question Latif’s preferred way of distinguishing prominent characteristics of the national. But this essay does provide numerous insightful details about the organisation of the Malaysian film industry in relation to other film markets. Latif especially relishes explaining the decline of the studio system in the early ’70s, pointing the finger not only at the competitive industrial practices of Hollywood but also at the deluge of popular imports from the genre rich cinemas of Hong Kong, Indonesia and India. As it is concerned with a fundamental configuration of nation, however, the chapter defers intriguing questions about the impact of such multilateral economic and cultural interfaces to other investigations.

Bearing in mind that these are brief views from the region it is polite to mention that the authors never aim to present accounts responsive to currently fashionable formulations of national cinemas. In its often-scintillating coverage of vast slabs of cinematic history, Film in South East Asia effectively raises plentiful areas of necessary research for reception, materialist, economic and other historical studies. Most of the sections follow a similar template: they trace the development and activities of film production through silent, early sound, colonial era, ’60s new wave/independent and various contemporary “renewal” periods. Important auteurs, stars and industrial personnel figure highly in these accounts, as do recurring film themes and character archetypes as instances of social reflectionism. The quantity and scope of information is impressive and somewhat daunting if consumed all at once. It is an obstacle, perhaps, to greater appreciation of this kind of effort that the majority of films mentioned are unavailable through all but the most obscure of sources. Although emphasising film production, many of the authors include small segments on audience attendances and preferences in particular periods, the importance of domestic and international film festivals, cultural oddities (such as Thailand’s film-story booklets for citizens who could not read the English intertitles on silent imports), and various forms and functions of government intervention. Given the current boost in global attention for Asian cinema in general, it is interesting that only two of the authors from the region sign off in a better than cautious mood. The domestic and international successes of recent Thai and Vietnamese films contrast starkly with the situation in Laos. As Bounchao Phichit explains, “Laos is not able to produce movies, except in cooperation with foreign countries, owing to the lack of domestic funds, experienced filmmakers and the necessary equipment” (p. 91). Startling impressions like this certainly denote the importance of generating a healthy, purposeful regional dialogue. (According to Phichit, the home video market is burgeoning in Laos, and movies are shown regularly on three national television stations. Perhaps relatively inexpensive digital video is a solution for industrial rejuvenation.)

Curiously (or not), the most compelling essay in the book is Deb Verhoeven’s superb historical contextualisation of the problems facing contemporary Australian cinema. As our government continues to help finance films depicting the imagined flavours of Australian national identity, Verhoeven necessarily interrogates the inflexible bureaucratic implement still making films few people want to see. How much longer can domestic practitioners and their financier cohorts conspire in hallucinations of vibrant accomplishment when 95% of the theatrical market would uncannily prefer to submit to “cultural imperialism” than watch what’s morally good for them and good for the prosperity of the country?

Regardless of its problematic approach to the enunciation of the national, Film in South East Asia is a sweeping, informative and often fascinating work that treats its subjects with liberal doses of affection, nostalgia and concern. The authors are always lucid and concise, which often supplies enthralling reading. Each section contains short bibliographies and filmographies that help indicate authorial viewpoints and the key areas they address. Film in South East Asia is an excellent introduction for the curious, a useful reference for the analytical and a necessary addition to an under explored sphere of English language film literature.