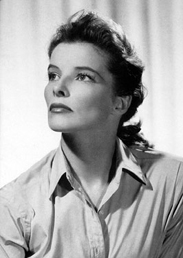 Anything definite is irritating – and stimulating (1).

For much of her career, Katharine Hepburn was caught in impossible moments – grappling with a leopard on a rug, hurriedly speaking Slovenian into a wire, ordering around a succession of foppish, younger men. From 1930 until, say, 1952, Katharine Hepburn could be relied on to be ‘discovered’ doing something extraordinary; a character played by Cary Grant or Spencer Tracy might walk into a room and find Hepburn engaged in any of the above activities – absorbed, matter-of-fact and consistent, as if truly observed by chance. How closely that desire to be seen as ‘impossible’ defines the spirit of 1930s and ’40s screwball comedy: of glamorous people being caught in fantastic, incongruous situations, and their quick-witted ways of eluding capture. In screwball, an exciting character might be ‘revealed’ to us via a beautifully timed theatrical set-up: what mattered most was the impassive playing of the scene – seeming not to relish the moment of being sprung. Yet on a few crucial occasions Hepburn allowed her pleasure in being marvelled at to show: far from indifferent to being watched, she was stimulated by it.

In Adam’s Rib (George Cukor, 1949), Hepburn’s character is actually performing a theatrical scene when her husband finds her in a ‘compromising’ situation. As Amanda Bonner, Hepburn begins the scene in a classic ‘stage’ pose: leaning against the fireplace, delivering a monologue, one hand thrust out in eloquent despair. An ardent writer named Kip (David Wayne) convinces her to act out an embrace “like they do on the stage” – and it’s at that point that Adam (Spencer Tracy) walks in on the ready-made scene. When Adam pulls out a gun, Amanda’s fear is apparent – but so is her thrill at being discovered in the middle of a performance. Perhaps more than any other actor, Hepburn was excited by the thought of doing something sensational for an audience – of talking in a sky-high voice, of walking in pants and moving with unparalleled sleekness and definition. She exaggerated those gestures and in doing so, she exposed some of the strangeness in being looked at. While her face and the dexterity of her movements effortlessly drew the eye, Hepburn seemed determined to seize our conscious attention: assuming an unnaturally straight pose at the beginning of a scene, entering the frame at oblique angles, twirling a leg on the way to sitting down. As James Naremore put it, she liked “visibly thinking about the camera” (2). Unlike the perpetually smooth Cary Grant, Hepburn showed us that there was something odd and decadent about commanding the camera at all times.

Why was Katharine Hepburn strange? Pauline Kael thought she was “like no-one I’d ever imagined” (3). In Adam’s Rib Spencer Tracy fumbles around before finally admitting “I can’t quite figure you out.” But while Tracy spent nine films seeming to misunderstand Hepburn’s behaviour, Cary Grant was the only actor who came up with a proper explanation for what we were seeing onscreen. In Bringing Up Baby (Howard Hawks, 1938), Hepburn’s character tries to interest a policeman by claiming to be “Swingin’ Door Susie,” a hardened criminal with a thrilling history of heists and murders. Grant is unimpressed: as he explains impatiently to the officer, Hepburn is merely “making all this up out of motion pictures she’s seen.” That was exactly it. The only explanation for Hepburn’s impossible ways – emphasising odd words, uttering vague, throwaway expressions under her breath – was that she was remembering another film, playing out the rhythm of a different scene in her head. Yet there seemed to be no end to the number of things Katharine Hepburn might be remembering while she was acting. In Bringing Up Baby she samples some of the extravagantly hard-boiled dialogue and feeling of noir films of the period. In another mood, she plays the conventionally frivolous heiress, pleased to be told that her schemes are “hare-brained,” and claiming that Grant’s efforts to save his career are “just like a game.” As Grant says, “You’d tell anybody anything that comes into your head.”

That seemed true of Hepburn in other films as well. In Adam’s Rib, Hepburn’s diction is often wildly idiosyncratic – as if she’s trying out an attractive way of speaking she had seen in a book or a play. When Amanda asks Kip “Yes, but do I strike you, strike you as overbearing?” he looks confused, not knowing what to do with the resonant emphasis on the word ‘strike.’ In probably the film’s best-known scene, Amanda asserts that a woman is not permitted to do “the same thing, the same, mind you” that a man does – what makes the statement so memorable is the way that voice hits the same vibrant note twice. When Susan breaks one of her shoes in Bringing Up Baby, she casually proceeds to invent a new walk, and then begins to repeat in an odd, childlike voice, “I was born on the side of a hill.” Where did these opaque pronouncements come from? It’s almost as if Hepburn was stimulated by her sets and scripts to recall phrases, narratives, fancies – and then simply played those associations out onscreen.

Sylvia Scarlett (George Cukor, 1935) also seems to take its tone from Hepburn’s uncanny use of her voice. The film begins with Sylvia’s strange, straight-faced declaration that from now on she will be “rough and hard” – that she will, in effect, infuse herself with the spirit of another person, and become male. This odd, underrated picture is full of such transformations – Cocteau-like ‘turnings’ in which the specific dreams of one person infect and infuse the apparent reality of another. But Sylvia’s sudden resolution is the first unnatural thing that happens in the film, and Hepburn’s directness in asserting the change erases the drama from the dream-like story: the switch in gender is possible but painless, because in the transformation from Snow to Scarlett, one novelettish view of sex has simply been exchanged for another. So often the tone of Hepburn’s voice – seemingly forthright, declarative – allowed startling or subversive words to be communicated without alarm.

In Woman of the Year (George Stevens, 1942), Hepburn does more frenetic talk than ever. Her Tess Harding has a staggering knowledge of international policy, and fluency in a range of European and Asian languages, all of which she wittily condenses into her New England accent. A scene in which Tess converses with several distinguished European guests at a party is supposedly a dazzling display of female proficiency, but actually a kind of replay of that scene in The Philadelphia Story (George Cukor, 1940) where Tracy Lord and her sister (Virginia Weidler) pretend to be hypercultured aristocrats for two society journalists. Hepburn brought her internalised notion of ‘culture’ into these films – one in which elongated gestures, a hectic schedule, and above all, liberal quotations of French communicate a very idiosyncratic version of class. (Hepburn’s mastery of foreign languages in several films is a sign of what she represents for her spectators: an incomprehensible but fascinating and consistent world.)

However, in most of her films, Hepburn’s romantic convictions – her ardent pursuit of truth – are only partly ironised. The majority of her characters from the ’30s and ’40s are obsessed with the subject of ‘real work,’ in acting, writing and thinking. In Woman of the Year, we see Hepburn tearing through pages of telegraphs and documents to extract the facts, the crucial information for her case. In Little Women (George Cukor, 1933), it is proof of Jo’s dedication (she is an unrepentant tomboy) that she can show her sister the proper way of demonstrating feminine vulnerability for a play they are to perform. Hepburn’s idealism is reflected not only in her theatricality, but also in the clean, clear hand gestures which, in conversation, denote both intellectual rigour and an openness to ideas. In The Philadelphia Story, Hepburn raises her fist into a small peak and punches the air as she talks passionately to James Stewart about his becoming a “first-rate writer.” In an earlier scene, while reading a book she admires, she touches the pages with wonder, handles the corners with great care, and then gestures emphatically with it as she walks out of the library. When talking about her aspirations, she compresses her fingertips into a point, as if crystallising a concept. In so many of her films, Hepburn seems touched by the idea of exactness – of writers finding the right word, journalists nailing a story, athletes reaching the peak of their potential. In Bringing Up Baby, part of our enjoyment of her presence is our sense of her precision – the way she strides easily across a golf course and crisply picks off a row of balls, one by one.

In the end, I think it’s that precise definition which is our strongest impression of Katharine Hepburn. She taught us a new way of being looked at – instead of giving herself to romantic, soulful close-ups, she showed us that the eye always follows the person with the quickest, cleanest movements, especially if they wear a black suit, have deft gestures, and speak in a startlingly definite tone. Her influence can be seen in the starkly modern styles of Anjelica Huston, Annette Bening and Judy Davis – all of whom narrow their voices and dress darkly, and are compellingly linear presences onscreen. Yet unlike, say, Bening, Hepburn was never insulated by her own coolness – she never got caught up in the fascinating rhythm of her own voice, or preferred angular gestures over warmth. Her moves were at once stylised and intimate – Hepburn could even stylise a swoon, showing us she was still swept away by the romance of becoming a character.