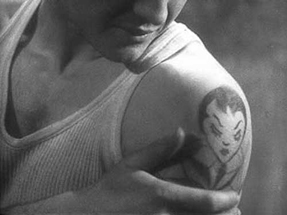 Jean Genet set an example for other self-performers like James Dean, Joe Orton and Andy Warhol to follow. His real life, like those of his successors, emerging as by far the most compelling work of art he produced. Like those other iconic artists, Jean Genet is Jean Genet’s consummate creation, and finding the boundary between the day-to-day realities of life and his creative existence is a bit like exploring a Mobius Strip.

Abandoned by his birth mother, Genet was brought up on a farm, where despite his academic gifts, he was unpopular for his effeminacy and insistence on speaking only formal French, rather than the local slang. Unsettled and kleptomaniac, he bounced between various carers (including blind musicians and Parisian typesetters), spent time in psychiatric institutions, and then joined the army at the age of 19. He was stationed in Syria, but soon deserted, escaping to bum around Europe, funding his travels through prostitution and petty crime. Eventually busted, he spent a long period in jail, where he wrote Our Lady of The Flowers (1942), the work that came to the attention of Jean-Paul Sartre, who secured Genet’s release and became his patron. Genet suffered from depression throughout his life, and attempted suicide more than once.

Un chant d’amour is clearly influenced by Genet’s North African military service, his homosexuality, and his ‘shrugged-off’ sense of separation from the ‘group.’ In the film, soldiers sweat their days away in the solitary cells of a military jail/oven in the desert, and dream of frolicking with each other in the grass and flowers of home. When desire and/or boredom overcome them, they rub themselves erotically against their concrete cell walls, blow cigarette smoke to each other through glory holes, or dance. A guard watches them through peepholes, simultaneously aroused and terrified by their bizarre and sometimes brazenly sexual behaviour. The film is a showcase for Genet’s legendary sense of homosexual carnal glamour – a sense or characteristic emphasised by Fassbinder in his film adaptation of Querelle de Brest (1982), and an area where Genet was way ahead of his time – and his formidable knack for sound and image poetry. The fact that Un chant d’amour is Genet’s only film is a big loss for film lovers. It is a remarkable and unique short film that has been regrettably uncelebrated.

Granted, Genet wasn’t under pressure to make a social statement that pleased producers, activist groups, and mainstream audiences all at once. That’s a post-AIDS pressure the (mainly non-gay) makers of films like Philadelphia (Jonathan Demme, 1993), The Next Best Thing (John Schlesinger, 2000), The Laramie Project (Moises Kaufman, 2001) et al have buckled under, leaving mangled and meaningless films in their wakes. On the other hand, ‘indie’ gay movies like Totally F***ed Up (Gregg Araki, 1993) and Road Movie (In-shik Kim, 2002) aren’t as earnest, but are in many ways still just reactions against Hollywood gay norms. Nothing, however, explains why makers of films such as these ignored Genet’s close-to-perfect template for gay cinematic expression. Echoes of Un chant d’amour are visible in everything from Madonna videos to perfume advertising, absent only – and unforgivably – from most other gay-interest cinema.